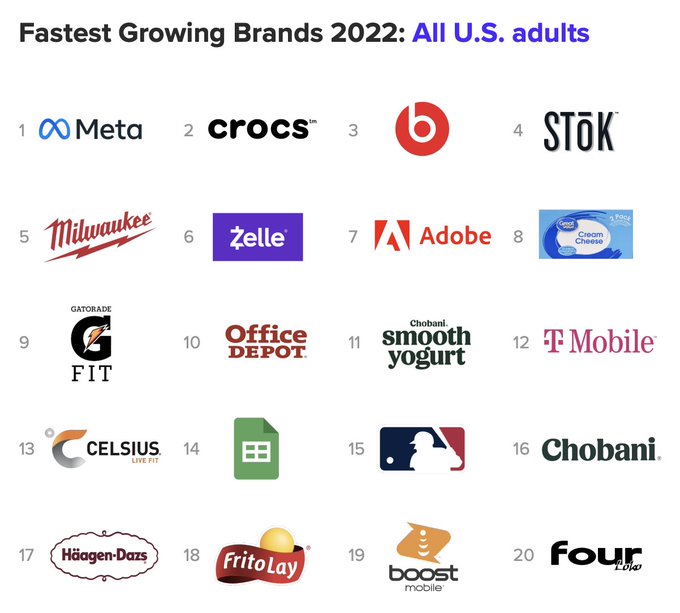 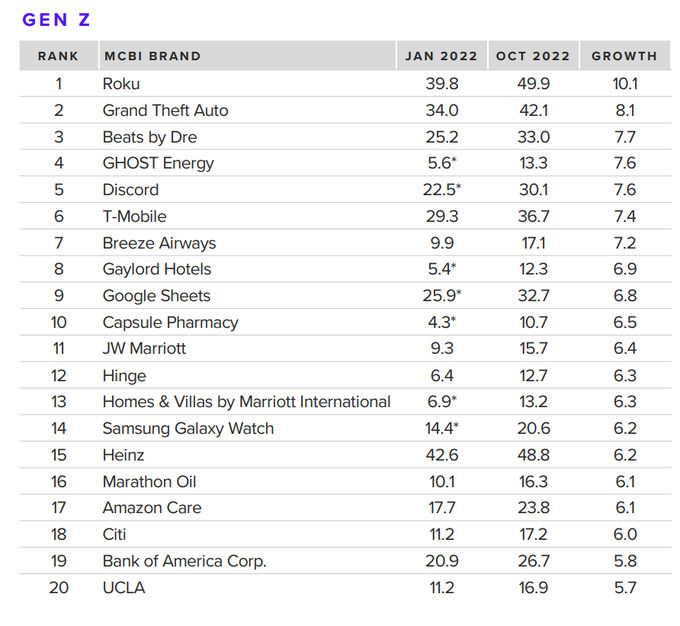 Gaylord Hotels? What's that, a chain of gay saunas?

I'm just here for the claim that ROKU is the fastest growing brand amongst Gen Z.

That was only a couple of years ago!

I'm just here for the claim that ROKU is the fastest growing brand amongst Gen Z.

Also, realized today that I know I've been on the internet far too long, as

exists in my mind as a "fuzzy, nostalgic memory of internet yesteryear."

The last time I watched the NBA regularly the Sixers still had Doctor J and Moses Malone.

I never really watched the NBA. The guys riding horses and hitting balls with hammers just looked dumb to me.

Better than the NFL. That non-standard "football" just mutates the beautiful game all out of recognition.

Disocered today that "A Charlie Brown Christmas" will be only on Apple+ this year, which is just insanely offensive to me.

At this point, it should be simulcast across every network each year as a public service.

Nationalize "A Charlie Brown Christmas," is what I'm saying.

Why isn't anyone sitting next to the black kid? Oh wait that was the Thanksgiving special

Dad: Can we skip the gift-giving this year again for Christmas? I think we all have everything we need anyway, so what's the point?

Mom: Can you and your brother get me this $1000 coffee maker I will probably never use except to show off?

I'm seeing my brother tomorrow, I assume we'll talk about it after watching our weekly X-Files episode. For the record, my answer on the coffee maker is no.

Disocered today that "A Charlie Brown Christmas" will be only on Apple+ this year, which is just insanely offensive to me.

At this point, it should be simulcast across every network each year as a public service.

Nationalize "A Charlie Brown Christmas," is what I'm saying.

I was reading an article about Don't Tell Mom the Babysitter's Dead and I watched the trailer embedded in the article specifically to hear one line. Sure enough, right near the end of the trailer, "dishes are done, man". I've been saying that line pretty much every time I put something in the dishwasher or, god forbid, actually wash a dish since the movie came out in 1991. Of course, there are several threads in the comments of people, likely about the same age as me, saying the exact same thing. I'm pretty sure that qualifies it as one of the greatest lines in cinema history.

I think you can watch the Snoopy specials without a subscription. Not the same as being on broadcast I know.

Avatar (the James Cameron CGI-palooza, not the cartoon) is on ABC tonight, and I'm half-watching it.

Part of me wants to say it doesn't look quite as impressive, but it was always supposed to be seen in theaters, not on an office TV.

Mostly, I'm just seeing the tail-sex scene for the first time since 2009 and gawking at it incredulously.

I'm reminded of how I saw it twice in the theaters. The first time, I was completely enraptured by it, the second time, I spent the second half of the movie having a very good time laughing my ass off at the script.

EDIT: Also, the final battle in this movie is structured EXACTLY like a video game.

"Kill all the Big Bad's lackeys! Then, destroy his Big Bad Ship by blowing up each of the engines and making it crash. Then, finally, kill the Big Bad himself in his final form!"

I don't know why but I really hope Avatar: Water Style tanks. I'm not actively campaigning against it and if you want to see it, good on you. This is more of a quiet part of my lizard brain crying out to the universe.

I don't know why but I really hope Avatar: Water Style tanks. I'm not actively campaigning against it and if you want to see it, good on you. This is more of a quiet part of my lizard brain crying out to the universe.

Well, if it makes you feel any better, that almost exactly how I feel. I recognize that I'm being irrational so of course no hate on anyone who sees it and/or enjoys it. But something about the hubris involved, and how aggressively mediocre the first one was on all but the absolute surface level, makes me want to see it fail.

If you're fine with 37 Marvel movies every year, but think 2 Avatar movies in a decade is too much, I'mma suggest you go and think about that.

Cos if you wanna talk about hubris and mediocrity ......

Hence my knowing that it's irrational. Not trying to defend it.

That said, I don't know that many people trying to argue that the MCU is some kind of leap forward in the technology or artistry of cinema. Most of the people involved in it seem to know exactly what they're making. There's room in the world for schlock.

Everytime I hear about Avatar, I just think "stop trying to make fetch happen." They are Gretchen to the MCU's Regina George.
I think I wouldn't be so against Avatar if they weren't acting like it's the sequel everyone has been desperately waiting for. I know they can't just come out and admit that original had no lasting cultural impact, but i find the dishonesty of the ad campaign to be counter-productive at generating interest. It was technologically amazing, and made oodles of money, but it had a crappy story that didn't grab anyone, so the only people who are eagerly awaiting the sequel are those hoping it will make them as much money as the first one did.

I don't know why but I really hope Avatar: Water Style tanks.

As I've gotten older I've realized that wishing for things to outright fail is just a fool's errand. People are going to like what they like, and basing my enjoyment on what the general public feels is good or bad is just the shallowest of takes. You either like a thing or you don't. What everyone else thinks should be irreverent, right?

Although I guess that's why things like the "Hot Takes" thread exist here, right? For validation that your negative opinions on a subject are justified? It's the same reason why the internet has taken a turn on the Marvel Cinematic Universe since you really need to watch every movie to understand all the tie-ins, yet that's exactly how the comics are structured.

I don't know. I've always been confused why people feel the need to see something fail. Clearly there's a group of people who believe in the thing and want it to exist...Who are we to say that thing isn't something that should exist in the first place?

...Brought to you by the Committee That Believes Final Fantasy VIII (maybe even XV) Is The Best Final Fantasy

I'm not living and dying by the box office take and overall reviews, man. I know I'm not gonna see it and don't really care who does. There's just a small part of me that will find macabre joy if it fails. Just a little poke at Cameron's ego.

I don't know much about James Cameron, but I think more of him since an interview I read the other day. The gist was that the Terminator movies were intended to be allegories about how people act when they dehumanize each other, and that the T-1000 taking the form of a cop was premised on how police see themselves as above civilians, and not bound by the same rules, etc.

I think that's part of what feels extra frustrating about Avatar. Cameron is capable of well-made crowd-pleasing action movies that also have a reasonable amount of thematic relevance and subtext.

So why is this bog-standard, on-the-nose white savior story the one that he seems to consider some kind of magnum opus worth revisiting?

Honestly, that struck me more as a JK Rowling style unprompted post hoc tweaking than something he actually meant the movies to be when he made it.

Snopes has a page on the Terminator thing, and that really was Cameron's original reasoning. The source is Stan Winston recounting why they made the T1000 a cop.

What we're learning here is that Cameron is sh*t at allegory.

FWIW, release is in a few days and all the reviews I've seen have been glowing.

A very long time ago I use to carry around a voice recorded that used mini cassettes. I used it to take down random thoughts, lines to poems, observations and whatever else was on my mind.

"note to self could the universe be inside a substance we can't see? Dark matter maybe?"

"Consider the possibility that hugs have a vampiric effect. Maybe we observer a persons energy when we hug them or vis versa make us or them stronger"

Now I would use my phone or watch but it wouldn't be as clean. I'd have to search for the app instead of just pressing a button.