Has anyone had a harder time keeping awake during title fights as tonight’s two?

The welterweight was at least somewhat interesting, in that the challenger at least kept moving forward.

Jones, OTOH, was just too dominant. There were some points in the last round where the challenger was completely gassed, and Jones coulda knocked him out though.

Also, he shoulda been DQed for that knee to the head.

I don't understand how he wasn't DQ'd. What's the rule say?

Was Smith “down”? He was only touching the ground with his feet and one weight-bearing hand. https://mmajunkie.com/2018/02/people...

Somehow Smith seemed to have declined the penalty like in an NFL game. Or maybe not DQing Jones was ref discretion based on his assessment that the knee didn’t seem to affect the outcome of the fight whatsoever.

Nah. The ref and the Dr asked Smith if he was OK to continue. If he was smart, he woulda said no, won the title and made fat bank on the rematch with Jones.

And become the most hated fighter on the UFC roster and in need of a new nickname for invalidating his current one.

Unless the illegal knee was made by a fighter who wasn’t in position to see whether the opponent was grounded, in which case the ref can end the fight as a no contest.

Yeah, I'm more (failing to) making the point of maybe we shouldn't be asking the fighter who OF COURSE will want to keep going when it comes to health/safety stuff. Fighter safety shouldn't be the fighter's responsibility in the midst of a fighter. Refs/doctors should be making those calls.

Yeah, I'm more (failing to) making the point of maybe we shouldn't be asking the fighter who OF COURSE will want to keep going when it comes to health/safety stuff. Fighter safety shouldn't be the fighter's responsibility in the midst of a fighter. Refs/doctors should be making those calls.

Ahhh. I misunderstood what you were saying. Sorry 'bout that!

McGregor wants to create the most lopsided betting odds in MMA history: https://nypost.com/2019/04/02/conor-...

Previously seems like that may have gone to a Pride event with Minotauro Noguiero. https://www.tapology.com/search/mma-...

So it seems that you have to go through a paywall to watch UFC now. What are they? ESPN live? UFC.tv? And PPV? Are there any other paywalls that I’m missing?

Is this how it’s going to be from now on? If so, which is the best service to subscribe to?

Ugh.......the "We are on ESPN" feux excitement is such a crock. Yes, technically, you are on the ESPN network, but no one can watch it! Maybe there's a whole generation of sports fans who want to watch their sports streaming that ESPN wants to capture, the cordless generation, but that's not me. I was perfectly happy DVRing most Fight Nights from FS1 and going to sports bars for PPV UFCs.

With the switch from Fox to ESPN, here's the new schedule: 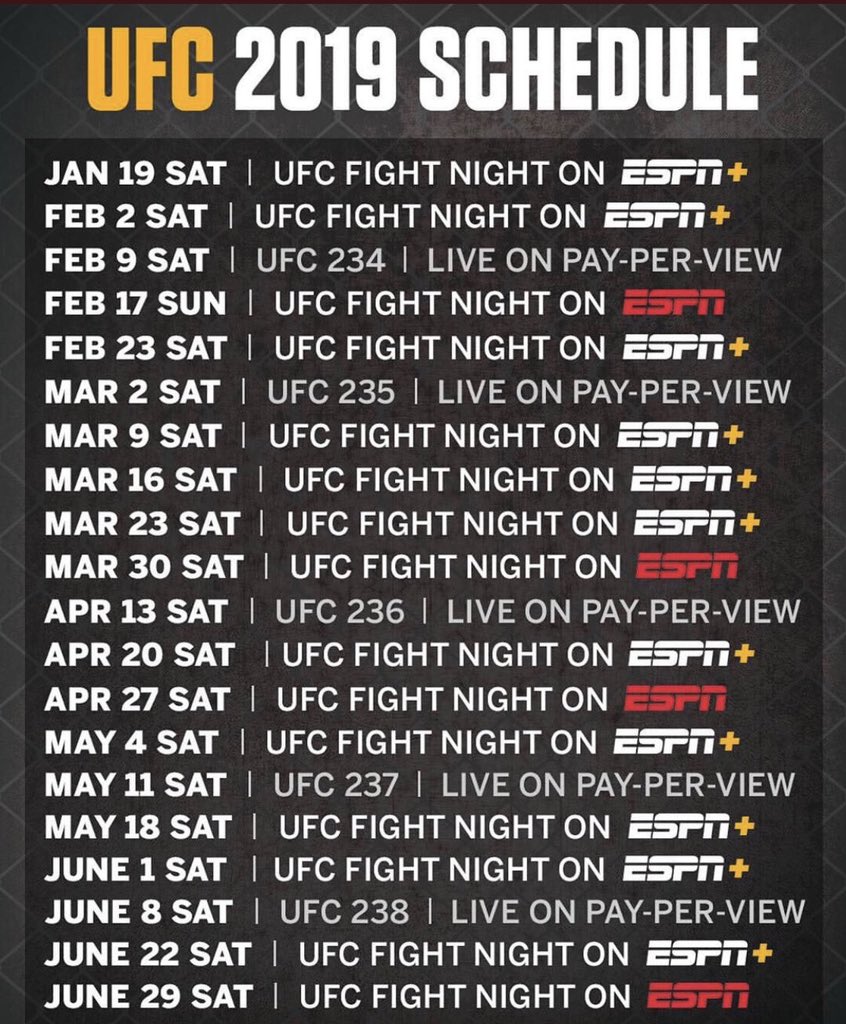 Most of them are on ESPN+. Here's the good thing: if you have a UFC Fight Pass account, cancel it and save some money. You can subscribe to a year of ESPN+ for cheaper than a year of Fight Pass.

Bad thing which really pisses me off, PPV UFCs starting with UFC 236 in two weeks:

So now to watch the full event, you need both a Fight Pass account and to pay for the PPV directly on ESPN+. I just checked my TV listings for Saturday April 13 and the PPV channels don't include UFC 236, so now I need to hope that the sports bars I like know how to hook up a Roku or something to their TVs. I might simply become an ex-UFC fan because I am not going to pay $60/month or whatever for events.

It's like Dana doesn't want to have the sport watched by new fans at all now. You're either into MMA and fork over the money for + and PPVs or you just watch the knockoff events (e.g. Bellator) and never see any UFC except for the few events per year actually on real ESPN.

The UFC Bars website says that BWWs in my location are "confirmed" for UFC 236 but I doubt they actually gave any thought to whether that is possible. Let's see if my tweet gets any response:
https://twitter.com/keithustus/statu...

@BWWings How are your restaurants confirmed for showing #UFC236 on April 13? Beginning with that event, UFC PPV events are on ESPN+, not cable systems' PPV channels. Do your restaurants have ESPN+ configured on Rokus or something? @ufc @danawhite

This is a big problem if you ask me. You know the whole concept about how fragmenting your consumer base is a bad thing to do? You know the other thing about how you shouldn’t confuse your customers? If it’s not broken, don’t fix it?

I don’t think this is Dana White’s idea. Remember that UFC was purchased by a Chinese media company. And they probably overpaid by orders of magnitude. I think the Chinese company doesn’t understand the American entertainment market.

My bold prediction is that they will go down in flames. Then they will change their policies. But it will be too late. Then, White and the Fertitta brothers will buy the UFC back from them at a fraction of the original selling price. The Fertittas are gangsta’ yo!

Could be, could be.

At least they haven't messed up the Post-Fight Show. It is actually better--same duration (1 hr) but now without commercials.

Another good thing about ESPN+.....replays at really high def that you can watch for weeks after the original broadcast. If I'm out of town for an event weekend, no biggie, I'll catch up Monday or Tuesday.

Another major problem is there is an event literally 19 out of 21 straight weeks. That's not "event" programming, that is regular season basketball (yawn).

Natural result of so many weight classes. If Dana wants a belt for Cyborg that Nunes wasn't expected to take, that means an additional 5-20 fighters who each need fight time a few times per year. And talk of changing weights from 155 - 170 - 185 to 155 - 165 - 175 - 185 means even more fighters on roster. And our only hoping of saving 125 is for Cejudo to NOT fight for the interim 135 belt while USADA teaches athletic commissions more of the science of weight-cut released-from-fat old banned supplements for Dillashaw as they have had to begin for Jonny Bones.

Bought my first PPV in a long while (probably since DC/Stipe I). My soul is a little darker having put $$$ in The Kingpin's pocket.

But I do get to watch Nate and DC.

I’m so out of the loop. I can’t stomach paying twice for one PPV. (Once for ESPN+ and once for the PPV itself.)

How confusing was it to pay twice and then try to watch the event? Was it hassle free?

I’ve considered getting a VPN and watching it surreptitiously. But that also seems like a lot of trouble.

That was a fun card. You definitely picked a good one to buy in for.

For the most part, the fights on the main card went how I expected them to. But DC/Stipe was a bit of a surprise. I mean, I hadn't ruled Stipe out by any means, but I figured that DC would play a pretty wrestle-heavy sort of game. When he successfully did that in the first round, I thought he had it in the bag. For the 2nd and 3rd I was wondering why on earth he was fighting like that, but still thought maybe he'd win on points. Then Stipe came in with those body shots and, yeah, you know the rest... Even DC seemed a little confused about why he fought that way.

I bought E+/PPV combo that ESPN has been doing for the last couple PPVs. I knew I couldn't miss two of my all time faves so I pulled the trigger. I anticipate it'll all get rolled over when we get the Disney+ bundle (Disney, E+, Hulu).

It was strange watching him put it on Stipe for a good 10min, beating him to the punch, and then...just gassing? I was nervous the whole time with his hands down and really weird what he was asking his corner about if he was down.

I want him to retire and save his body. He's got nothing else to prove in this sport and he's got another full career ahead of himself as an ambassador for wrestling and MMA.

Yeah, DC is a great commentator. But my gut tells me he'll try to get a trilogy with Jon Jones and see if he can reclaim his light heavy belt.

Hell, I'm already sure Dana White has a couple of dates circled.

...Oh Christ, are we seriously going to do this again?

Much like Mayweather-McGregor, the boxer would take a few shots, largely toy with him and then beat him down as things went on. MMA is not boxing, boxing is not MMA. Canelo would kill him.

Usman beats the everloving snail snot out of racist Trumpanzee.

Not at all surprised. Usman is pretty much what we would have seen had Yoel Romero switched from wrestling to MMA much younger.

I like watching business bullies, who think they don't have to play well with others, get smacked down:

Well, I hope he makes good on his promise to promote a big fight at Tachi Palace and also to not lay off anyone and to take care of his fighters. Though even if he pays the fighters their current rates, it will still mean that only the upper echelon will make a livable wage.

Put me in the disappointed camp. If Dana were to have tested the crap out of everyone as he said he would, if that was actually possible, then there really isn't a good reason not to have had one signature sporting event we've been waiting for for years or at least a good number of good fights once that one was called off again, before relegating the rest of the schedule to when things get back to normal. The "fights every week" on an island thing would not have been a good move though unless he was actually interested in quarantining the entire fight and support staff on it in their rooms for two weeks before starting up camps and fights, a true Dana fantasy land.

I too am disappointed, not because it isn't an insane, terrible idea, but because we live in a world that has been huffing ketamine for three months straight and Dana White recreating the Mortal Kombat movie in real life seems perfectly fitting for 2020.