I have always fed my dogs Iams. Slightly more expensive, but worth it. Lately I've tried Purina One True Instinct based on some professional recommendations, and I had to buy Roscoe a snuffle mat because he wolfed it down too quickly! I've been trading off between the Iams (chicken based) and the beef & salmon Purina Pro for several months, and he's been doing great.

Side note: I often get complements on my dogs' coats when I feed them Iams. Either I have got lucky with my furry friends or the Iams is nutritionally good for hair.

Incidentally, Roscoe can sleep through anything, even exploding helicarriers: 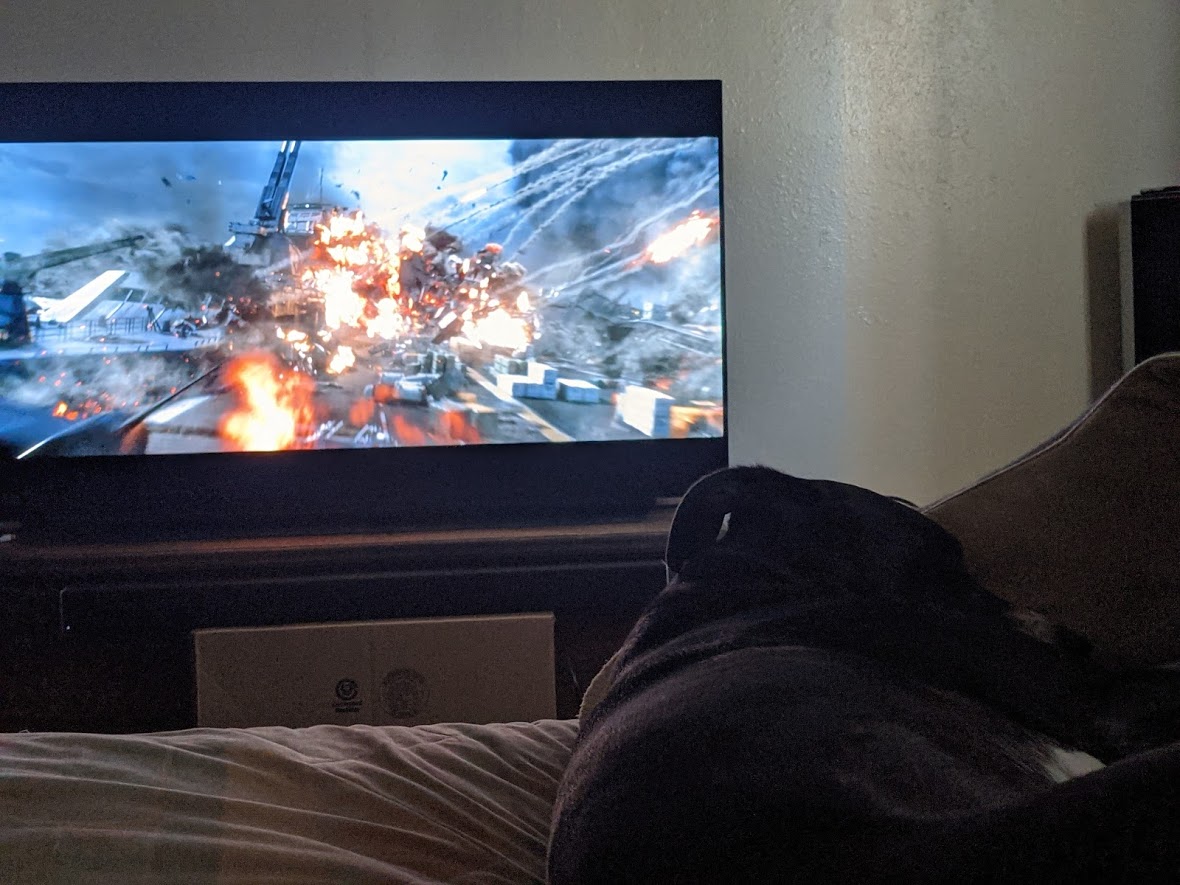 I’m not a veterinarian, nor a professional researcher.

When we first adopted our fuzzy little guy, I did an extensive web dive on dog foods. I ended up deciding on Nutro for various reasons. We’ve been completely happy with it and my dog loves it. We mix a bit of kibble with a bit of the gravy and meat wet food, both Nutro brand.

I just now did a search on Nutro and recalls. This particular article was very helpful. It seems to be independently written and honest, not corporate propaganda.

The article lists every Nutro recall and goes into detail about them. Most or all of their recalls were voluntary, not an FDA mandate. Even the seemingly more serious issues regarding their food turn out to be unproven or benign. It’s my opinion that this is still a good product and I’m sticking with it.

Here are some of the more concerning parts of the write up:

We also want to alert readers to the fact that, in late June 2019, the FDA identified Nutro as one of 16 pet food brands that may be linked to heart disease in dogs and cats. None of those 16 brands have been recalled as part of the agency’s ongoing investigation, though. Most, but not all, of the pet foods are “grain-free” and/or dry (kibble) dog food formulations.

The FDA says this is a “complex scientific issue that may involve multiple factors,” and that it cannot even be certain that diet is a cause of the heart problems.

In 2002, the FDA’s Center for Veterinary Medicine (CVM) released the results of its investigation into the presence of pentobarbital in popular dog foods. This euthanasia drug was finding its way into dog food by way of euthanized, rendered cattle and horses.

“Rendered” means some of the meat ingredients were created from the process of byproducts and other materials being cooked together and then centrifuged. Rendered ingredients can include animal digest, animal fat, beef and bone meal, beef tallow, and meat and bone meal.

A previous study (by the University of Minnesota in 1995) had already demonstrated that pentobarbital survives the rendering process virtually intact. In other words, high-temperature cooking does not destroy it.

CVM scientists analyzed nonrepresentative samples of dozens of dog foods purchased from retail stores in 1998 and 2000. Brands that ended up testing positive for the presence of pentobarbital included Nutro, Ol’ Roy, Dad’s, Purina Pro Plan, Kibbles ’n Bits and Gravy Train. Yes, all of these brands were shown to contain some level of pentobarbital, a deadly drug.

According to the CVM, its researchers concluded, however, that “the low levels of exposure to pentobarbital that dogs might receive through pet food [was] unlikely to cause them any adverse health effects.” Also, the center stressed that there was “a complete absence” of dog or cat DNA in the samples — meaning that, contrary to decades-old, horrifying rumors and myths, no euthanized dogs or cats had been rendered into the pet food.

The lab results released upon completion of the CVM’s investigation in 2002 showed that, along with several other dog food brands, 2 different samples of Nutro Premium Dog Food tested positive for the presence of pentobarbital — but not in amounts thought to be harmful to dogs.

Understand that these tests results from 2002 simply reflect “a snapshot in time,” as the CVM describes it. The investigation took place many years ago, and the pet food formulations have most certainly changed since then. Therefore, “the data cannot be used to draw inferences about dog food being produced and sold in the U.S. today,” the CVM says.

You can see the full test results here, including the results for other brands like Alpo, Ol’ Roy, Pedigree, Purina, Nature’s Recipe and Hill’s Science Diet. About half of the tested dog foods contained low levels of pentobarbital.

spoilered due to wall of text

I too have had good success with Iams. Our dogs have always been healthy (up to the point where they get cancer and die). Our "old man" dog is currently 16 and chugging along. Given that he is what I call a medium-sized dog (about 55lbs) that is pretty good.

As a kid we always fed our dogs Pedigree and buy that big giant yellow bag because it would last so long. As an adult now, I feed my dog Blue Buffalo Wilderness (Red Meat because chicken gives her nuclear farts that could wake the dead). We've been pretty happy with it.

Blue Buffalo was the subject of the latest recall if I recall correctly. I considered that brand, but I think my vet's advice prevailed.

Blue Buffalo was the subject of the latest recall if I recall correctly. I considered that brand, but I think my vet's advice prevailed.

Not the most recent, but one of the ones before that. Yet, to be fair, the 2019 investigation seems to be inconclusive at best to this date. I almost wonder if the 2019 scare is nothing more than corporate warfare and slander. Time will tell.

Before we detail the recall history for Blue Buffalo, we first want to alert readers to the fact that, in late June 2019, the U.S. Food and Drug Administration (FDA) identified Blue Buffalo as one of 16 pet food brands that may be linked to heart disease in dogs and cats.

None of those 16 brands have been recalled as part of the agency’s ongoing investigation, though. Most, but not all, of the pet foods are “grain-free” and/or dry (kibble) dog food formulations.

The FDA says this is a “complex scientific issue that may involve multiple factors,” and that it cannot even be certain that diet is a cause of the heart problems. For full details, see our article on the subject.

We also want to point out that despite rumors, there has been no so-called “Blue Buffalo lead recall.” A lawsuit filed in June 2017 claimed that 3 Blue Buffalo dog foods (Blue Wilderness Chicken Recipe for Small Breed Adult Dogs, Blue Freedom Grain-Free Chicken Recipe for Small Breed Adult Dogs, and Blue Basics Grain-Free Turkey & Potato Recipe for Adult Dogs) contained very high levels of lead, but the lawsuit was dismissed by a judge in 2018.

The company had this to say in response to the lead lawsuit:

“Blue Buffalo strongly denies these allegations, which represent the unsubstantiated claims of one person, and have not been supported by any evidence or data.”

There are other actual recalls which petful.com details in their write up on Blue Buffalo.

I originally had her on Instinct Be Natural Puppy, but my vet suggested I get off of raw food. He said it wasn't bad for her, but it presented a salmonella danger to humans in the house. He gave me a list of of brands, but said that Purina Pro Plan was probably the easiest to find. I mentioned that to my breeder who said that she didn't feed it to her dogs, but that lots of other champion breeders did so she figured it was fine.

I did a ton of research on dog food and landed on Eagle Pack. They have never had a recall since they began in 1985 and it's all made in the USA. The best thing is the price is really good (30lb bag for $45 off of Amazon).

I have 2 11yr old Puggles who you would never think are 11. They run, they play, they are amazing. They have eaten Eagle Pack most of their lives.

We now have a 11 month old rotty/pit/staffordshire terrier mix. He's currently eating Iams Smart Puppy but within the next couple of months will transition him over to Eagle Pack as well.

I shied away from Blue Buffalo some years ago due to recalls but came back recently as we struggled a bit to find a food that the dog we got in 2019 wanted to eat and didn't cause weight gain. He is a basset/pitbull mix and prone to chunking up. My dogs are now getting plain old Blue Buffalo chicken and rice and are doing great on it. Soft coats, no skin reactions, good teeth, well-formed dookies.

I think the lesson here is that other than the cheapest brands, most foods are actually pretty good but no food is totally immune to quality issues that are sometimes legitimate and sometimes specious.

My boy Fozzie. Not a strawberry. 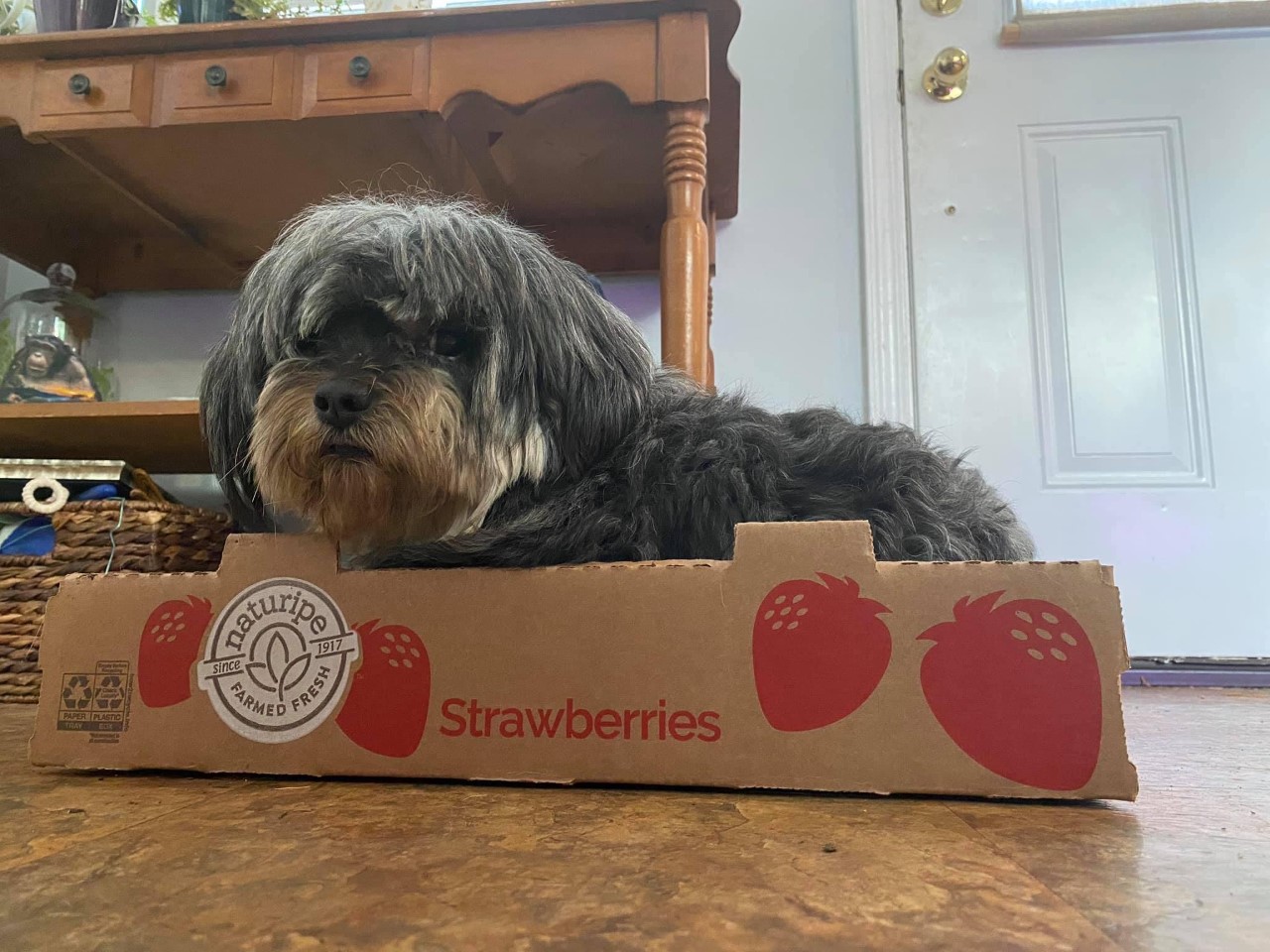 I saw all the Blue Buffalo stuff and given that the heart disease results can't be linked with hard evidence, I tend to ignore stuff like that. If someone else found the same results and it could be proven more definitively, I'd pay attention. But given the "may" in their findings (plus 16 other food brands they're studying?), its hard to really trust something like that without more of their studies.

I got a Catwoman figure, and it somehow felt right to take her picture next to Hazel... 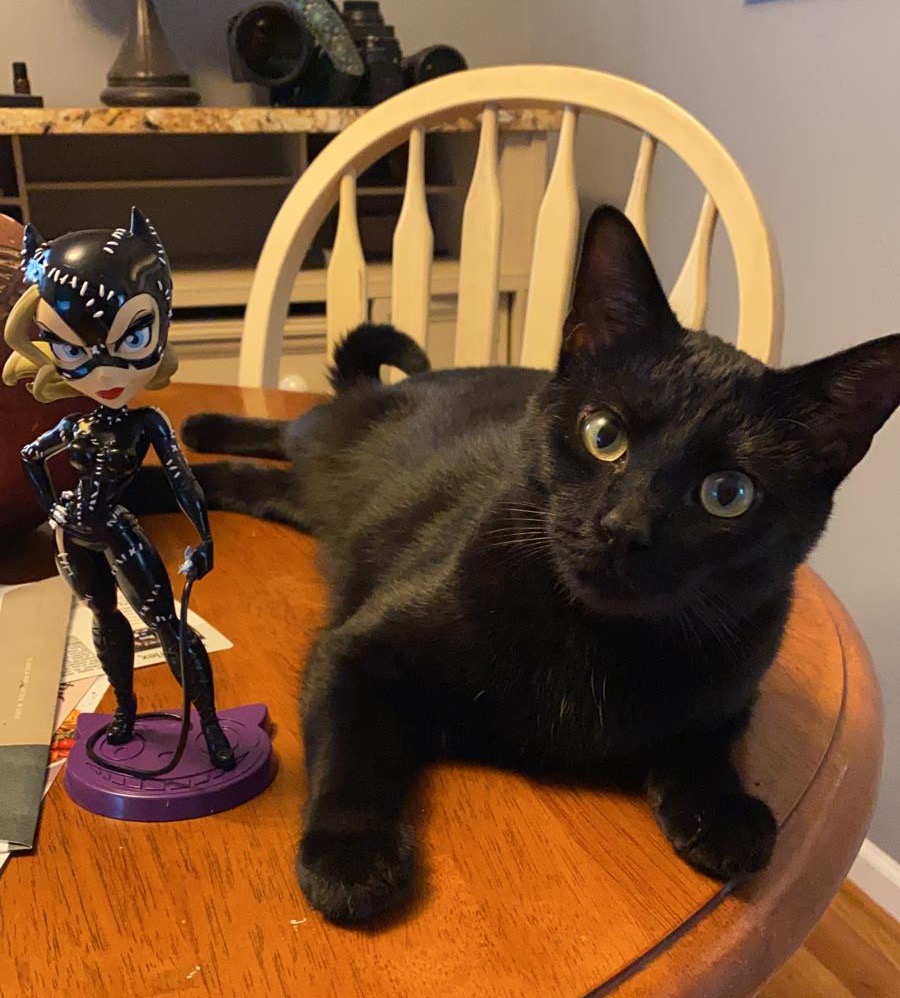 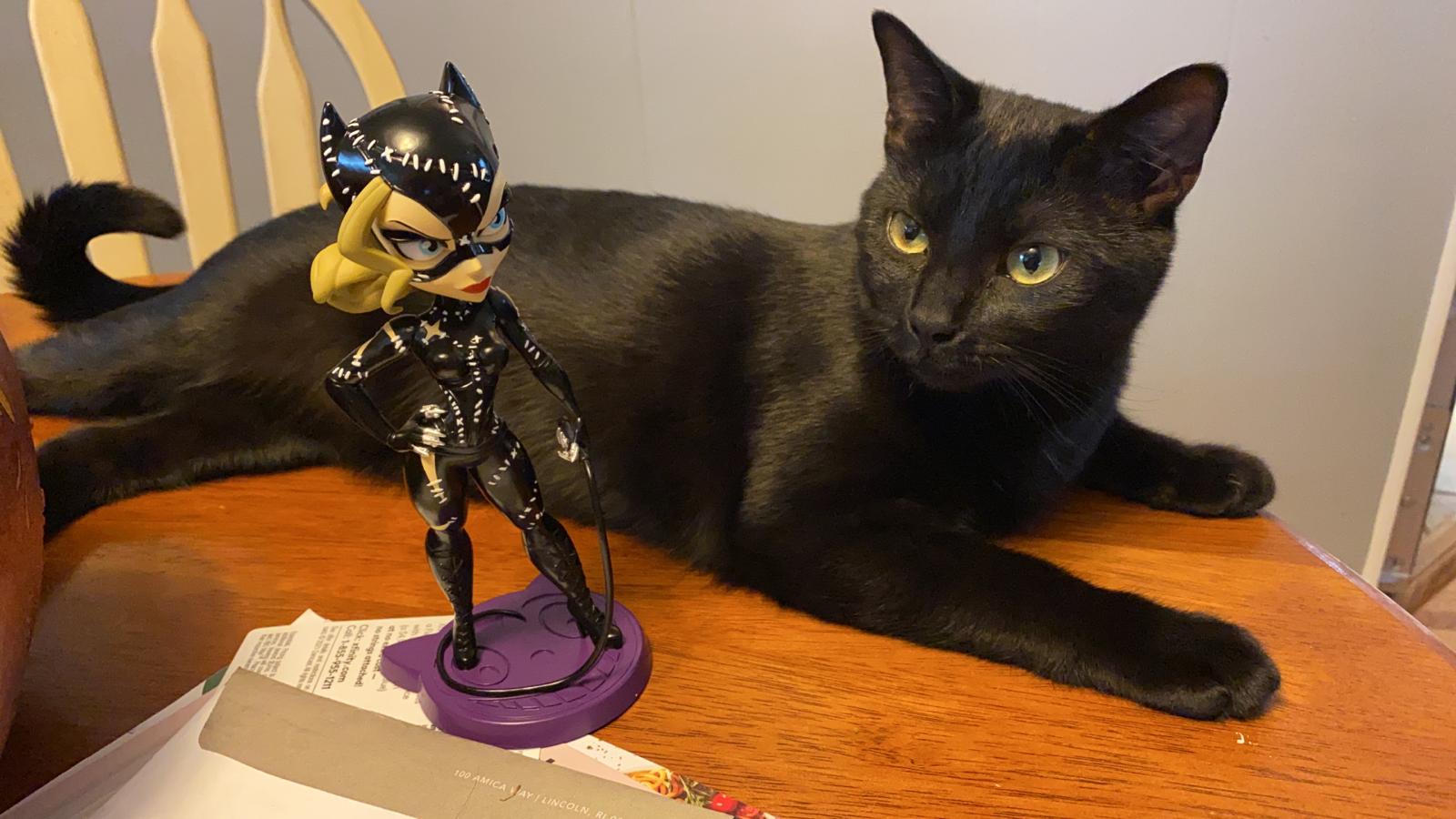 she is so pretty!