It's 4:04 and ticking on Friday afternoon, and I'm sardined in the crush of winking traffic lights tinseled along the eastern shores of Puget Sound. I ignore the canine-pitched squeeee of decayed brake pads and the steady amber glow of the check-engine light — as I've done for the last several months; it's tradition at this point. The important thing is to keep the hood emblem pointed north. With no idea about the schedule or wait times, I just continue weaving up Highway 99, hoping to hop the soonest boat west. I treat yellow lights like Burt Reynolds' Trans Am treats road closure signs.

This weekend is "Cabingate 2013," a combination football tailgate and bachelor get-together to celebrate what will hopefully be a couple of checkboxes in the "W" column for the local pigskin squads and the impending shuffling off the unwedded coil for yet another member of the crew. I agree with the oddsmakers that the outcome of both this weekend's football contests is in doubt, but I'm no expert. I am an expert, if biased, prognosticator on this particular marriage, though; it's mine, and it's the assured late-October lock-of-the-week.

I s'pose this is probably not your typical start to a "bachelor party." At 37 years old, with grown-up responsibilities and a destination wedding to pay for, a Hangover-style Sin City romp filled with hookers and blow didn't quite find its way onto my Outlook calendar. Besides, I've never really been one for the Scarface lifestyle. I'm pretty staunchly opposed to stab wounds, and I can't and won't imagine the horror of a Bengal tiger's litterbox. Our Russian Blue kittycat provides more than enough of both of those horrors.

So no strippers, no casinos, no fancy cocktails, no extravagant meals. No extreme bungie skydive machine grenading. No party hats, party favors, or party decorations.

Yes video games, however. Despite the balding and the bad knees, I have a child-like fascination with cars and video games, and a high-end wheel and pedal setup enhances the experience exponentially. As I work my way out of town, I have a collection of accoutrements and gaming options sliding around in the cavernous, crusted trunk of my not-entirely-beloved Plymouth.

Yes, I drive a PT Cruiser. Yes, I'm sensitive about it.

A bit of background. I have "lucked" into no small number of middling to just plain lemonny domestic automobiles. I like to think of myself as an Official American sh*tbox Enthusiast — a grand title, I know. Indulge me. Before the PT Cruiser, it was the cheapest, no-frills plastic chunk of Chevy Cavalier that a college grad could buy. No joke, I actually got a college grad discount on it. That particular heart-murmur of America was rigged to an EKG and triple bypassed before I sold her. Prior to that, I crashed a cheapy Mustang, killed a Camaro, and rode dirty in the most gangster of lavender-pinstriped, white Geo Metros. Boy, do I miss that 5-speed manual transmission. The rubber-melting 65 horsepower could roast those front tires through zero gears.

I've earned my self-appointed title, is what I'm sayin'.

Obviously, my tastes are impeccable. My wallet, however, is very peccable. So I'm trying to be Michael Schumacher on a Fahrfegnugen budget. And that, friends, is why I have a Fanatec gaming steering wheel jammed in the PT's trunk, courtesy of the fine people of eBay. This particular wheel, pedal, and shifter combo, made in Germany and modeled after the real-deal 911 Turbo S, isn't from the Porsche factory in Stuttgart but rather a tech company in Landshut. It's wireless, compatible with the 360, PS3, and the PC, and feels like it's made of the finest Corinthian leather.

Fanatec's sim racing wheels are top notch; I'm talking authoritarian force feedback, uber-snickety sequential and 6-speed manual shifters, and a "germaneered" (seriously, Fanatec's word, I didn't make that up!) pedal unit that includes a clutch. This setup was erstklassig a few years back. Now there are newer, shinier gaming rigs available (like Fanatec's own CSR Elite), which is probably the only reason I found this at such a deep Deutschmark discount.

I tore open the Turbo S earlier this week and performed a Stig-style test run. It was immediately, painfully obvious that the driving position required for sitting on the couch with the wheel clamped to the coffee table would eventually result in the curvature of my spine permanantely resembling Laguna Seca's Corkscrew. 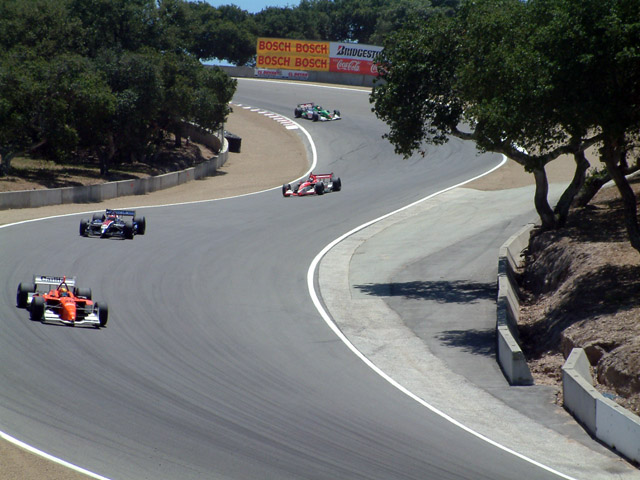 After a couple hours in forum-time (for the uninitiated: 1 forum-hour = 3.5 hours real-time), my search yielded three undenaible facts:

Without giving away any spoilers here, one could probably make an educated guess about which product I opted for, considering my aforementioned inclination towards cheap transportation (let alone the looming Maui nuptials, island-priced rehersal dinners, tapestry-sized mai tai tabs, and requisite Tommy Bahama wedding wardrobe).

The Fanatec wheel and Forza Motorsport 4 are now center stage for a weekend's worth of entertainment, lashed as it now is to the Home Depot Special Edition Flip Top Racing Work Stand (patent pending!) with no small amount of zip ties, velcro, and a shim fashioned from a rolled up copy of the Kitsap County Sportfisher's Monthly (ooh, the swimsuit issue!). Sure, anyone could pick up a dual-analog controller and blow our gear-grinding, fish-tailing lap times into the weeds, but that's not really the point. Playing driving games with a controller may be a bit of an acquired taste, but everybody with a driver's license knows how a steering wheel works, which means, in the (unlikely, in the simultaneously wrench-headed and game-nerded circles in which I run) event that some of your friends aren't gamers, they can still get a bug-eating grin on their face by planting anything from a Prius to a Pagani Zonda into a tire barrier, all while drinking a beer. Why didn't the fine folks at Home Depot rig a cupholder on this thing, anyways?

So this is the glitz and pagentry of bachelor party legend: missing shifts in a clapped-out Lancia in desperate pursuit of the ghosted taillights of my buddy's apex-strafer of choice (the grippy and horribly French Peugeot 205 RC), growlers of microbrew cooling off in the rusty fridge and a half dozen freshly netted Dungeness heating up on the stove. 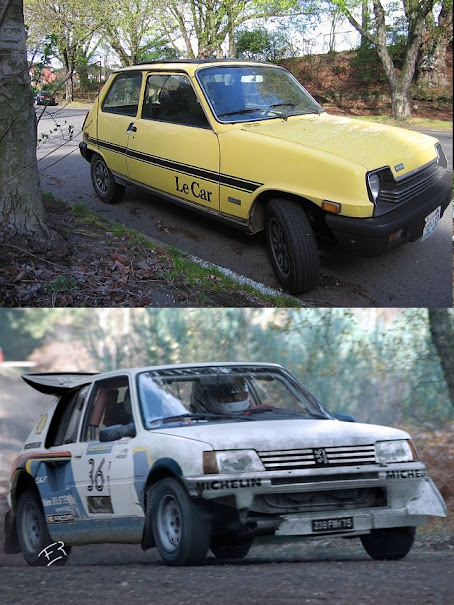 This weekend should be about relaxing, but my competitive nature won't allow for lollygagging. I'm infamous amongst my friends for a dorm room incident involving NBA Live '96, a broken SNES controller, and the phrase, "THIS IS SUCH BULLsh*t, I'M BETTER THAN YOU AT THIS!" I'd like to think I've matured since then — the thinning hair and deteriorating knees would indicate so — but every time one of the guys manages to shave a fraction of a second off my best lap time, I immediately pry their white knuckles off the wheel and hog the Xbox for a couple more hot laps.

Gracious in defeat, I manage to refrain from throwing the controller, but that could just be because the wheel/stand/pedal apparatus is too awkward to spike like a football. Otherwise we might've seen an NBA Live '96 dorm-room repeat. Hey, Don't judge me. This is my special day, damn it!

The weekend flashes by like a Sauber C9 on the Mulsanne Straight. Saturday highlights include a stop at Poulsbo's Valholl Brewing (deliciously high-powered Imperial IPA!) and the aforementioned butter-drenched crustaceans. In traditional Seattle sports fashion, though, our alma mater chokes in gut-wrenching style on Saturday night.

I pry my eyes half-open Sunday morning, the pressure behind my irises signalling that my brain, drowning in last night's microbrew, must've surfaced for air too quickly and suffered a case of the beer bends. Andrew Luck picking apart the Seahawks' secondary doesn't do much to improve my mood at 10am on a Sunday morning, but a handful of Excedrin and a leftover hamburger bun are the next best remedy. Tailgating, videogames, intoxication, groomzilla attitude ... perhaps that maturity I've gained is only skin deep.

In recovery on Sunday night, I'm gutted about the football games (and gut-sore due to the rapid beer and junk-food intake), but ecstatic about the weekend video gaming. I'm excited about the prospect of throwing those digital race cars around some more. The wheel, shifter, and pedal provide an experience that, if not exactly "visceral," is tactile and tangible in a way that a couple of plastic nubbins on a wireless controller can't begin to emulate. In the words once uttered about an ill-fated convertible Ferrari, "It is so choice. If you have the means, I highly recommend picking one up." 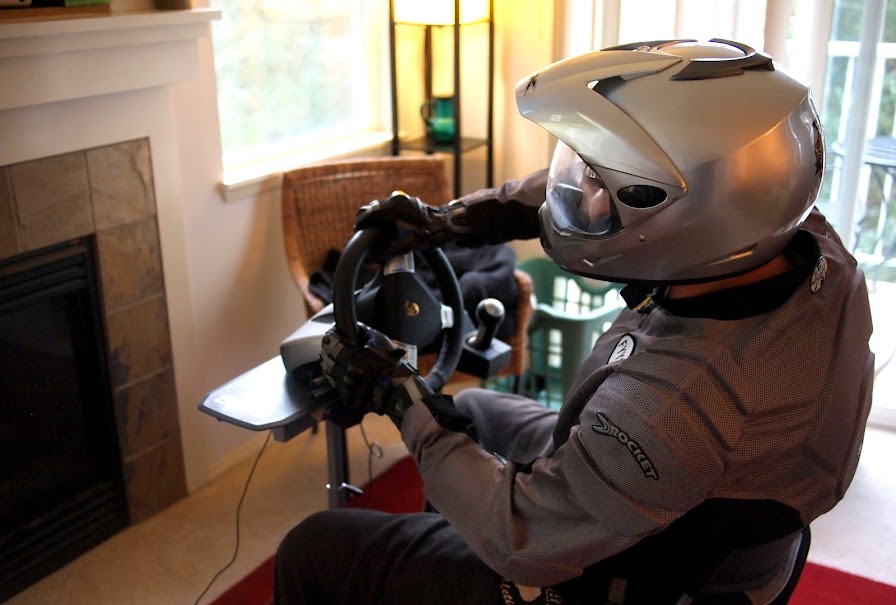 Some say... he thinks Cannonball Run is a documentary, and he poops 100% Dungeness Crab...

...Kcander is known to pull ppl's arms out of their socket when they lose... I suggest a new strategy, let the Wookie win.

The last pic totally pulls the article together. Nice work. Excuse me while I head to the basement to find that wheel that's down there somewhere...

Thanks, Rahmen! I have to credit my fiancee...er...WIFE now, gotta get used to that!...for the photos, that shot at the end was a no-brainer selection when I was looking through the pictures she took for me, makes me laugh every time I see it!

Wait - you brought the fiancee to the bachelor party, and she still said "I Do"?

Wait - you brought the fiancee to the bachelor party, and she still said "I Do"?

Hahahaha! No, no, no, that photo was taken after the bachelor weekend. Even if I'd invited her, no way she would've accepted the offer - she's way too smart for that. She would want no part of the football fandom, the bitter beers, or the crab murder. And the only racing game she'll play is Crazy Taxi.

My bachelor party was go-karts and board games. You're in good company. Or at least, you're in my company.

Despite knowing jack sh*t about cars (and Jack left town) I found this a joy to read. Very nice.

And congratulations on tying the knot.

And congratulations on tying the knot. :)

Thanks so much for the Ridgid Flip Top idea! I just bought a Driving Force GT used off of Amazon last Friday and I was contemplating building a stand for it.

My wheel doesn't fit perfect so I'm still going to have to mod the stand a bit but it's going to be so much easier now.

I can't take credit for that, I just ran across it on some random forum. It's funny, the comments about it on its Amazon page are about half reviews for using it as a steering wheel stand. For the time being, I'm having to wedge a big fantasy novel under the tabletop part as a shim for the clamp since the tabletop is so thin, but it works decently enough. One of my buddies, though, has two Wheel Stand Pros, one for his Logitech G27 and the for his Driving Force GT and I have to say, you get what you pay for. They're expensive, but they're much, much easier and more comfortable to use. I've been keeping my eye out for a reasonably priced used one on ebay, but so far no luck!

Great read! You get Bonus points for the german references. "Fahrfegnugen" really made me laugh, once I recognized it.

Second star to the right

... but it is the Stig's Canadian cousin!

I'm not a real Canadian. But I play one on TV, eh?