The Gamers With Jobs community is filled with many fine, upstanding Goodjerati, worthy of our time and attention. But when recently asked to choose my favorite besuited carcharodon, one thought sprung immediately to mind: “Can you really get a shark drunk?” Apparently, you can. Once Wordsmythe let me borrow his dictionary, though, I realized that this week’s profile subject could only be none other than our favorite progenitor of cyber-bunnies, BadKen.

You see, BadKen may be most famous around these parts for one post in particular. As inclusive as they may be, not all of us can claim to have an entry in the Goodjer Commandments, and fewer still can claim to have spawned a mini-meme of sorts. Granted, BadKen’s mark may not be as indelible as those of ColdForged and Dejanzie (Oh look! A scavenger hunt!) but his had better pictures. You don't know this thread of which I speak? Keep reading, and all shall be revealed.

I'm Ken Badertscher. No, not that Ken Badertscher, that's my dad. I was born in 1961 in Ohio. I escaped at a very young age, and grew up in Arizona listening to Earth, Wind & Fire; Led Zeppelin; and Herbie Hancock. I escaped Arizona by joining the navy, got married, had a couple kids, got discharged and got divorced. Being a loudmouth on message boards got me a job in Silicon Valley, where I spent most of my career writing software for various large software companies: Atari (back when they made computers), Apple (back when they made computers), Microsoft, Yahoo, and later Amazon. My career ended in Seattle when fifteen years of sixty-hour work weeks, constant release pressure and little-to-no vacation took their toll. Now I'm back in Arizona again (ugh), taking care of my dog, helping my elderly parents get along and trying different occupations looking for one that won't make my head explode.

2) What are you supposed to be doing when you're reading GWJ?

Living with disability can give you a lot of woolgathering time. Participating in the GWJ community gives me something to do when I'd otherwise be staring off into space, dwelling on the past.

3) When you're not working or gaming, what do you do with your time?

Since I'm not really working, I spend most of my time looking for things to do that I might be able to turn into a job. I've tried news blogging, reviewing, taking writers' manuscripts and making them into ebooks, I've even tried writing myself. I haven't yet found something I can stick with and make work long term.

My dog Jette saved my life when I found her at the county animal control shelter seven years ago. They told me I saved her life, but really it's the other way around.

Weirdly, after moving all over the country, just about all my family lives in Tucson, Arizona now. I have two younger brothers. One works for the city of Tucson, one sells beds. My two kids are grown now, but I don't see them much (long story). My son is a mechanic in the USAF, out soon, and my daughter @BethaniePB is currently a bartender and 2011 Playboy Cyber Girl of the Year. Yep.

That's my GWJ claim to fame, I guess — the GWJ Commandments includes the thread where I shared that my daughter had done a test shoot for Playboy.

5) When and/or how did you get into gaming?

My earliest video game memory is feeding quarters into a Pong machine at a golf course where I worked as a teenager. Ever since then, I've owned computers or consoles of one kind or another and played games on them. I got into online gaming with Warcraft II on Kali, and I became completely obsessed with online gaming playing Myth: The Fallen Lords on a dialup network connection with a fine group of gentlemen called Clan Plaid, who have get-togethers to this day.

6) What is your fondest gaming memory?

It would have to be acting as captain in team games of Myth: The Fallen Lords with Clan Plaid. Something about the tactics and pace of that game just made it an ideal multiplayer experience for me. Plus I was a good captain. The only thing that has come close since has been raiding with GWJ Alliance on WoW, before everyone started playing SWTOR.

7) Why do you play games? Why haven't you outgrown them?

I have a bit of a Peter Pan complex. I don't know where I first heard this quote, but I'm fond of it: When you stop playing, you start aging. While the "start aging" part has caught up with me, I have no intention of stopping playing.

Another reason I keep playing games is for the cognitive exercise. Not every game is brain-challenging, but most involve learning new things, and some exercise your brain's strategy and tactics muscles.

8) What is your favorite game over the last year or so? Why?

The Assassin's Creed series, particularly Assassin's Creed II. I had played the original on my Xbox when it first came out, but never really got into it. Thanks to the generosity of some GWJers, I was able to play through the whole series and I really enjoyed Ezio's story. Plus I could climb around on buildings and shoot down guards all day long. The graphics are outstanding, the controls are smooth, and the gameplay is engaging.

9) What is your favorite game that you're playing right now? Why?

Right now I'm loving Kingdoms of Amalur: Reckoning. Finally, an RPG with decent action combat! The story, art direction and world design are really sweet, too. It's not a perfect game, but it could be the best introduction to a new IP I've ever seen. I got this game and Skyrim at the same time (Skyrim... another GWJ gift! You people are insanely generous!). Anyway, I haven't played much Skyrim yet, but I have 260 hours in Reckoning.

10) Which upcoming game are you looking forward to most? Why?

Darksiders II. I would say SSX, but that's already out and it's not available for PC. Whimper. (I loved me some SSX on Dreamcast). I really got into the original Darksiders; I played it all the way through, which is rare for me. The pre-release info for the sequel looks fantastic. Diablo 3 is around the corner, too, but after playing the beta, I've cooled a bit on it. I'm sure I'll still log a lot of hours with Diablo 3 though.

11) What first brought you to GWJ? What keeps you coming back?

I don't remember for sure what it was that first brought me to GWJ. I think it was actually just the name — I saw it somewhere and thought I had to check it out, and it lived up to my expectations. Grown ups discussing games, how rare. Still rare!

12) Is there a particular forum on GWJ that you frequent/favor? Why?

I like Everything Else, oddly enough. I feel like I can participate more. The Games and Platforms topics are all over the place since this crowd has such varying tastes. I do have my favorites in the Games forum, of course. P&C is right out, though I did venture in there for a brief period for a specific topic.

13) What is the story behind your handle?

Well, my name is Ken Badertscher. So... BadKen. In high school I had the dorky nickname "Kbad" — I guess it's not far from that to BadKen. I first used badken when Gmail was just starting out, and it was my work email at Amazon, too.

14) What is the story behind your tag?

If I recall correctly, Grenn picked it. It's perfect. Say it like you're scolding a dog or a wayward child.

15) Thanks for taking the time to answer our hard-hitting questions! Any last words?

I want to thank our benevolent overlords for running such a fantastic site. Gamers with Jobs has the best moderation I've seen in any internet community, and I think it's the tone set by Certis that really makes the site work. And I'm not just saying that to suck up to the boss. Of course it helps that there are so many fantastic people all over the world contributing. Vive la GWJ!

Sure. Anyone would look at that face and think, "I bet he sired a Playmate."

Sure. Anyone would look at that face and think, "I bet he's a George R.R. Martin impersonator."

Sure. Anyone would look at that face and think, "I bet he's a George R.R. Martin impersonator." 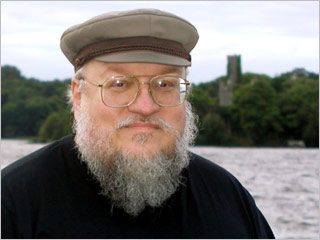 BadKen, there is so much I don't know about you. This is surreal and incredibly interesting.

ALSO: They're all coming back for MoP. Just you wait.

And the whole world has to answer right now, just to tell you once again: who's bad?

Ken is. Ken is the one who is bad.

Great profile, but the big news is the GRRM thing. They even have the same glasses.

BadKen, get the hat, silver up that beard, and start fleecing convention goers. You won't need to worry about the job market!

For here am I sitting in my tin can

My only joke concerning his daughter:

You know, I caught those. I just didn't fix them.

Surprisingly enough, this had nothing to do with the link BadKen's daughter on Twitter.

I don't see the ressemblance. One is a stoic writer of epic fiction with some sort of beard. The other is George RR Martin.

...this had nothing to do with the link BadKen's daughter on Twitter.

What exactly did BadKen's daughter do to the link on Twitter?

Oh man, Bethanie has a tweet asking about photographing jewelry, which my wife Yellek does, but I am not going to tell my wife that I was browsing a Playboy model's twitter and hey, here's a question that you could answer....

Does that mean I can direct my feelings on how Denna's acting like a bitch to BadKen?

...this had nothing to do with the link BadKen's daughter on Twitter.

What exactly did BadKen's daughter do to the link on Twitter?

She's a preposition thief. Ask anybody.

I've gotten to know BadKen through his posts on the Amalur thread. It's nice to get a complete picture. Of him.

Oh man, Bethanie has a tweet asking about photographing jewelry, which my wife Yellek does, but I am not going to tell my wife that I was browsing a Playboy model's twitter and hey, here's a question that you could answer....

Just tell her that you follow her feed for the articles.

ALSO: They're all coming back for MoP. Just you wait.

Most of us are still f-in paying for it. Just no one shows up!

I like BadKen because he's got a scary avatar.

Finally got around to reading this- was excited to hear BadKen would be profiled!

Congrats on the profile, Ken!

Thanks everybody. I do hope Mists of Pandaria brings everybody back to WoW. I found myself getting frightfully bored when I wasn't doing regular raiding with goodjers in my ear.

I am enjoying playing other games than WoW, though. My pile is... large.