Having politely told Bill that I would ride off south into the warmer waters of another adventure after I’d finished collecting badges and engaging the Elite Four in a lip sync battle to end all lip sync battles, I quickly ducked into Cinnabar Island’s laboratory to see about that fossil I had previously deposited. Come to find out what was awaiting me was a shelled dear. The scientist mentioned some scientific name, omanyte.

As he blathered on about genus, species, and the impossibilities of such an ancient fossil being resurrected, the omanyte and I exchanged a glance. The shell in front of me opened and closed as I was told I could use the name Dana. Seeing as the shell made it difficult to perceive any broad gender underpinnings to the form in front of me, having a gender-neutral name seemed all too perfect. Then again, my brother, Dane, would likely narrow his eyes at being told Dana was also a male name, seeing as he bristled at having the middle name René (considering how that was perceived).

Making sure everyone was now set, we booked flights on our fine avian queens and kings as we headed to Viridian City. Having seven badges, I figured the gym that had been previously closed might be open. Somehow it seemed entirely too appropriate, especially considering the path to the west led on to the Elite Four. To the gym!

Perhaps it was all the various treadmills we were traversing, but Alice decided that it was time to take on an act that was a bit more … suggestive. That is how I perceive changing your act to that of a Dewgong, which has to be among the oddest euphemisms I have ever heard. Still, whatever it takes to swing those sticks and make some noise, eh?

Treadmill after treadmill, surrounded by various jocks, I couldn’t help singing some Olivia Newton John. It is perhaps for the best that this is the last gym I am attending, as otherwise I would ogle all the people in such locations in much the same way. There is only so much oily body one can handle in a day, especially when that day includes layers of heavy makeup.

As I finally reached the trainer, who was some mysterious figure no one would mention, I was glad I had a side of melodrama tucked away in my bra (it is surprisingly malleable, so it’s always good to have some) as Giovanni came up again. Apparently he had taken a break from the gym to form Team Rocket and now is back to being a gym leader? I may have backhanded him for a third time, Daenerys roasting his poor Pokémon. We assured him that no matter his professional title, we would be sure to defeat him!

Yet this was not my recurring villain to end the game? I will say I was surprised as I picked up the EarthBadge and affixed it to my lapel.

Surveying the gym behind me, it was time to head out on west for my own gold rush. Or perhaps just my rival Rush once again getting in the way. His troupe was decidedly conservative in their attacks, which led to an amusing onslaught as I gave Dana a few pointers while we watched one Pokémon after another fall to the dance moves, heel stomps, and crotch grabs of the kings and queens. I’d say we quickly caught Dana up to speed, though there was a good amount of work still to do.

As I approached the next stretch, I was stopped by an officer who demanded to see my credentials.

Blinking in all earnestness, I held up the first, the BoulderBadge, and presented it, proudly proclaiming, “Leeloo Dallas Multidrag!” What followed was a display of the most draggy sort. My rocky, golem types came forward and laid out electric guitars as they strutted up and down. Then came the slippery water types who undulated and gave sweet homage to their idol Virginia Woolf as I presented the CascadeBadge; they then wandered off, rambling about having Pokéballs of their own. With a flash in the sky, Orororo led the next charge, as I handed over the ThunderBadge and nodded. Yes, “Leeloo Dallas Multidrag.”

The next badge, though. Oh, the next badge. Presenting the RainbowBadge, a veritable parade of Pokédrag royalty marched behind me, various floats passing by, thongs ever-present, shirts nary in sight, and feathers and glitter everywhere. I didn’t think I had any Pokémon that produced glitter, but one must understand that whereever there is drag, there is an 84% chance of glitter.

And so the parade moved on, surfing into giving the SoulBadge. By this point all the officers nodded, seeing so many accessories on my lapel (it was tacky drag day today—anything for a good parade) that they assumed I must have the proper credentials. And so it went, until I reached a large cave. Looking at the current lineup that I had for a show, I decided I must turn back and replace whom I currently had.

Be right back. Good thing I have that Multibadge thing behind me, eh? 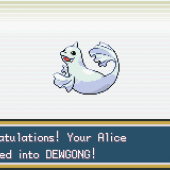 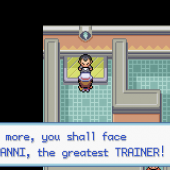 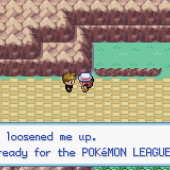 The badge presentation was my favorite part of the first game. If I'm not mistaken, they brought it back for Black/White with appropriately epic instrument additions as each checkpoint was passed