Much of what Gamers With Jobs has become over the years is a site where people with divergent interests can go and prattle on with like-minded individuals. Want to talk RPGs of every international flavor and format? What about hard-core flight sims? Fancy a little interactive fiction? We’ve got friends here for you to make, and there are conversations to be had. But it’s not often that the game asks us to talk to it. Nous wants feedback on its performance, input from the player that goes beyond the x and y axis. And at the end of the day Nous is not here to make friends.

The first thing that the program says to you is that “This program is called Nous. I am its voice and I don’t know what I’m for.” Is the program not sure what its intended function is, or is it not sure why it has been given a voice? In any other game this could be chalked up to poor localization, but here the ambiguity is as thick as it is intentional. As the pronouns and articles are becoming hard to manage, you are becoming irritated by Nous, and the game has yet to even ask you to play it. Until finally it does. “Give me input,” and you have to jam at a key to move on.

Your first act of aggression is to give Nous what it wants, and it will pull you further along that path before it is done with you.

Portal, Deus Ex, and Nous all share the same color palette, but Nous’ gameplay is straight out of the Geometry Wars playbook. Left stick/mouse controls movement and facing, while the right trigger/shift pulls friends and foes alike towards you, with a single button/key for your attack. Turn foes into friends by pulling them through disks scattered around the play field. Destroy enemies by thrusting into them and building up combos. It never feels incredibly challenging, but the impact and the visual spectacle are very satisfying.

What Nous manages to do very well is pace itself. The gameplay, graphics, music, and the AI itself will push you along the path to several crescendos, making you smile, laugh, and grit your teath in sweaty-palmed anger. It takes you through a range of emotions in a very short period of time, and leaves you with a solid take-away that I won’t spoil here.

Take a moment to download and play the game, or view our three-part play through here. (Some of the tricks Nous plays degraded our video stream and forced us to cut a bit of video.) Perhaps we can settle here in this thread once and for all: What is Nous for? 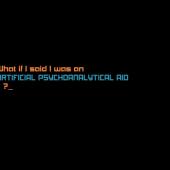 I, too, plan to check this out.

The screenshot alone sold me.

I said this a couple of times during the critical screening we had, but I think this is a perfect example of how the game itself is a narrator, through it's interface and scoring system. And in this case, Nous is an unreliable narrator who is constantly messing with you. It's SHODAN if she were actually in control of the interface and mechanics of the gameplay itself.

Side note: Apparently there's a bill in Congress that could make our sessions a little trickier.

That sounds fascinating. I'll have to check it out.

Your're spot on about the unreliable narrator Allen, but that's just a part of it. Nous is trying to tell us a lot more about our own feelings about games, our goals, our motivations, and it is unsettling in its delivery in order to reach that end. I'm looking forward to everyone's input.

(this is the designer of Nous)

Thanks for the write-up, guys. I have to say, that playthrough was the best I've seen - you went to the heart of several of the themes we were trying to get at, and came up with unique answers I've not seen before to some of them.

I'm sorry about that second-to-last level but I haven't yet been convinced to make it easier - 95% of players do get through it, and they seem to have had the experience intended. I don't know, though.

But thanks for playing it, it was very enjoyable to hear your thoughts.

No complaints from me. I got through it eventually, and it had the intended effect on me, pulling out all that agression. I could have stopped at any time... but didn't. Thanks for stopping by, and thanks for sharing Nous.