When I sat down to play Portal 2 I was looking forward to more of the heady, first person inertial platforming that left me dizzy. What I got was a mish mosh of goos and gunks, some clever wall-hacks, a bit of parabolic back and forth, and a potato stuck where my HUD should be. I think I had more of the experience I was looking for when I played Delta G, the product of DePaul University’s Game Dev Program’s class of 2011.

Like Portal, Delta G is about a person with a gun and no bullets. Your gun changes gravity, such that any surface you shoot at becomes the ground. You will hurtle through the void, dodging deadly spikes and other odds and ends that move around the environment with you, creating obstacles and also revealing pathways. It’s not unlike playing Labrynth from the perspective of the ball bearing, and in three dimensions.

The first prototype of the team’s game took place inside a cardboard box. Using tape and thumbtacks, they were able to show how the player moved around the environment and how the environment moved around the player. This early prototyping, built into the class by their professor José Zagal, allowed the team to refine their early levels. From it they got their tutorial level, which indoctrinates the player into the concepts by using a familiar city street which, Inception-like, provides points of reference even as it folds over on itself. But the Delta G team moreso than their classmates were only able to take the physical prototype so far before they had to, ahem, think outside the box.

Early iterations of the levels all had a claustrophobic feel, where players really had no idea where they were going or where they had been. So, the team added a breadcrumb system to a later iteration, a 2D ribbon that follows you through the game. The hardcore are welcome to turn it off, but in cramped levels with similar textures all around it’s really the best way to keep from inadvertently backtracking.

During late-stage playtesting, the team dreamt up another type of level, which became a favorite of playtesters. Instead of moving from surface to surface around the interior of a space, the team designed several levels where the players bounded from surface to surface on the outside of multiple objects. Here you get the giddy sensation of weightlessness you had in some levels of Super Mario Galaxy, but with the danger of floating off into the void that only astronauts and super-wealthy game designers have experienced.

I was very impressed with this game, and think that the team (Mirza Baig, Martin Diamond, Aaron Dittmann, Dan Glosier, Daniel Kristoff, Michael Mccullough and John Owens) really stood out from their peers with the amount of polish and creativity involved in this game. They were, however, the largest team, so that may have something to do with it. But with a less clear vision and poor teamwork, it could have turned into a trainwreck just as easily as into the gem it did.

Today, for the very low price of free, you too can be nauseated in new and unusual ways. Hit the link below, and let’s see if we can’t bring down poor Mirza’s personal blog today. 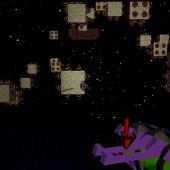 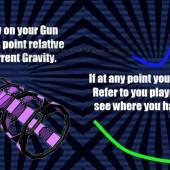 I'm excited about this one.

I agree about Portal 2. And this Delta G looks a lot like Portal, I will give it a spin this weekend.

Very very cool. Like vvvvvvvv but in 3d. I really like the House of Horrors level, though some spike placement seemed to hit "safe" areas.

The music reminds me of this song from Deus Ex: