Flotilla is the latest game from Brendon Chung, the creator of Gravity Bone. It's a simultaneous-turn-based strategy game set in space, where you take your handful of ships and fight tactical battles against things like tattoed chicken space pirates or crocodiles suffering from space madness, and win the occasional “best karaoke singer in the universe” award. There are several of you I know right now who are already downloading the demo.

For the rest of you, let me explain what I mean by simultaneous-turn-based. The gameplay lets you issue orders every 30 seconds and then lets you watch the results play out in real-time. Your comptuer opponent is doing the same, only changing his orders every 30 seconds. It's as if Homeworld only involved 2 ships and only let you set orders 30 seconds at a time. You usually handle only a few ships and are constantly trying to maneuver behind or beneath your enemy's armor, because hits to those weak points do massive amounts of damage. Since you can arbitrarily rotate your ship in any direction in space, this is trickier than you might imagine.

To add variety to the game, there's also some rogue-like elements. The universe is randomly generated with good and negative encounters on each planet. You start your adventure at the “Tutorial” system, which then allows you to fly off into adventures unknown. Each time you accomplish something, it adds a chapter to the story about your character. When you finally die, you click “Start Adventure” again and start the next adventure. I'm not sure what happens when you win instead of dying—primarily because I seem to really be pretty terrible at this game; I usually die 2-3 planets in.

There's also a co-op mode with an attached Xbox 360 gamepad. (At some point in the future, this game will also be coming to Xbox 360 Indie Games as well.) There's a skirmish mode against human opponents or bots that I haven't tried out yet either—the game just came out this week, so I haven't roped anybody else into multiplayer yet. (Hint, hint, goodjers!)

Each encounter (if you're successful) also rewards you with ship upgrades, which allow you to customize your fleet with improvements like increased firing speed or heavier rear and back armor. The randomized universe with ship customization gives endless opportunities to replay a new game every time.

The art style is whimsical and frequently hilarious—it never fails to put a smile on my face when I head to a random planet and end up staring down cats piloting a spaceship. The planets and ships in combat are fairly simple and abstract, but pretty—this is from the creator of Gravity Bone after all. The music gives a very 2001 vibe, with classical style and an emphasis of the grace and beauty of space combat. A turn-based game with classical music and beautiful scenery, what more could you want out of the art and music?

Why You Should Check This Out: Flotilla is an addictive simultaneous-turn-based spaceship-battle strategy game with a quirky sense of humor and some great art. The battles become pitched and intense, while still maintaining that turn-based sensibility. Ships frozen in air just before a missile barrage can leave you far more tense than any real-time clickfest. Combined with a randomized universe and rogue-like elements, the game is an endless universe of exhilarating, varied space battles.

We have a thread for that in the forums (which I know, you know about), though I just realized that the game was spelled incorrectly in the thread title, which is why I couldn't find it by searching.

Anyway, I like what I see and am hearing and have yet to try the demo. The main thing turning me off from the game is that all the ships are weak on the bottom, which is just a strange concept for a 3d game. I can understand a lack of armor in the rear (where engines reside), but the bottom ... always?

I really need to try out the demo though. The actual description of the game is mostly exactly what I love in games.

Seems like a neat little game. Lots of the game-design twitterati are playing it.

It's an excellent game. I'm about 6 adventures in, having been stopped in my inevitable galactic subjugation by succumbing to my seven month terminal illness 5 times.

The only downside I can see is that there's no internet multiplayer. It's all local, splitscreen or hotseat. Sadly.

But that's a limitation that is more than made up for by the humour, art, music and game play.

GET THIS GAME NOW!

Anyway, I like what I see and am hearing and have yet to try the demo. The main thing turning me off from the game is that all the ships are weak on the bottom, which is just a strange concept for a 3d game. I can understand a lack of armor in the rear (where engines reside), but the bottom ... always?

It seems totally fine to me, you have a weak side and a strong side, and the strong side is where the guns are. You can rotate arbitrarily. It makes for some very fun battles.

Looks like fun. Maybe not $10 fun yet, but definately enough to try out the demo.

Is Tali somehow involved?! If so I am in!

I've been playing a good amount of this lately and it's a fun game but doesn't have much depth. I would really like an adventure mode that involves different ships in addition to the randomized set of planets.

It is now up on Xbox live according to Shack for 5$ or 400 space bucks.

Yep, check it out. I especially like the Olly Moss-esque "cover" art: 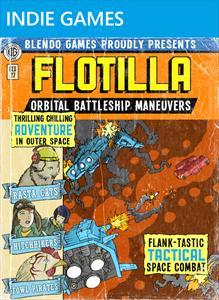 Wow. Downloading now on Xbox Live. Wish there was some online multiplayer.