After growing weary of my sad assortment of Public Enemy, Beastie Boys, and MC Frontalot tracks I recently embarked on a concerted effort to flesh out my mostly alt-rock music collection with some smart hip-hop trackage. I could use some suggestions from you younger and/or hipper types.

Here's the thing: for the most part the whole hard-ass gangsta act feels tired. And I'm not into blatant misogyny and pimp personas. It's a drag, because I totally dig Notorious B.I.G.'s sound, for example–I love the grooves on Ready to Die and Life After Death–but the lyrical content is a dealbreaker. Call me a patsy, but there it is. It's why I've avoided the genre for so many years.

Anyone have any recommendations–labels, artists, albums? Or, even better, single tracks. I'm on an itunes binge.

Aesop Rock - None Shall Pass

Great album. If you're looking for a track to test out, see if you can find Daylight by Aesop Rock. My favorite rap track ever.

In no particular order.

Some of this stuff gets pretty deep..

Most Lil'Wayne is good.
I love black star as well.
Dead Prez is good, especial Dem Skoolz.
Killer Mike is good, especially Blam-Blam.
Busta Rhymes, Jay-Z and Nas also get a nod in my book.
MC Chris for the win and round it out with some Wu-Tang and ODB.

Aesop Rock - None Shall Pass

Great album. If you're looking for a track to test out, see if you can find Daylight by Aesop Rock. My favorite rap track ever.

Wow, Demi beat me to it. I absolutely love Aesop Rock. One of these days I should get uncheap and actually buy his music (I fell into it in college).

I'd recommend MF Doom - maybe start with Madvillainy (his collaboration with Madlib) or Vaudeville Villain (where he uses his pseudonym, Viktor Vaughn). He has a dirty, dusty sound - a lot of his drum samples will be composed of drum hits with their tail ends cut off, for example.

I also dig Clipse's album, Hell Hath No Fury, which has fantastic production - its sparse, but also very rich, and the rhymes float smoothly across the top.

Avoid everything that is labeled Rap or Hip-Hop on MTV, Radio, and in general major labels.

Nothing Gangster, just pure Hip-hop...Currently if you want the freshest hip-hop (as opposed to hard core rap a.k.a "Dat Gangsta Sh*t") look to the "Chi", they've taken over that category in recent years with the following artists:

Avoid everything that is labeled Rap or Hip-Hop on MTV, Radio, and in general major labels.

I had the same impression. That's why I asked you guys.

Man, did you ever call that.

Thanks for the stuff so far, guys. Looking forward to checking it out.

I think Kanye West is great for those who enjoy the gangsta sound without the gangsta lyrics. He's reflective in his songs, he raps about his weaknesses. It's quite a stark contrast to the cartoon characters like 50 Cent.

I also recommend The Predator by Ice Cube, but it might not necessarily be for you.

Can't say it's really new but you might enjoy checking out artists from the Heiroglyphics label.

Killarmy is awesome. They are affiliated with the Wu-Tang clan. Silent Weapons for Silent Wars is one of my favorite hip-hop albums. Definitely worth a look.

Dr Dre's The Chronic is another great album. Songs like Let Me Ride and Lil' Ghetto Boy have more of an older R&b and Jazz influence while High Powered has more of a classic Hip-hop sound. The album is a little heavy in both content and lyrics though so it may not be for you.

I also love El-P's I'll Sleep When You're Dead too. Best track is "Flyentology." Second best is "Up All Night."

"Has got to be the sure shot"

The Moment of Truth album was my sh*t (and Mass Appeal on the "Hard to Earn" album is an undeniable classic)....

Bobby Digital (RZA)'s work on the soundtrack to Ghost Dog: Way of the Samurai still gets regular play in my rotation. It isn't new but it is pretty damn good. I think the beats trump the lyrics, but it is all around good stuff.

Bah, Kolbo beat me to the Pharcyde and Jurassic 5 nominations. Seconded!

5th Aesop Rock (I'm too lazy to find it, but I love the video for none shall pass),

And at the risk of sliding too pop-mainstream: Missy Elliot. She's like my secret shame. I dunno why, but I feel like that girl can do no wrong.

Also can not forget Prefuse 73. 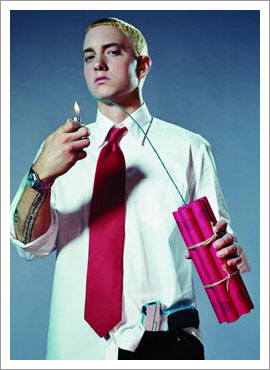 Umm. I got nothing.

Others hit on Deltron3030, Lupe, Kayne West, Common, Mos Def, etc etc. On a side note you may want to grab a copy of DJ Kicks "Nightmares on Wax" Good stuff in there.

Man, horror rap is woefully under represented. You guys like blasting zombies, but no one mentions Gravediggaz? Fo' shame.

(Hard to convey a sly tone on the internets)

Brother Ali and Atmosphere are my favorites.

Sorry, I missed your mention of Tribe in the post. Long day at work.

(Hard to convey a sly tone on the internets)

Haven't you played Mass Effect yet? The Elcor have a perfectly functional means of doing exactly that.