*Legion* is one person. I should probably note that, in case you didn't know. When he was beating me to a pulp as I grew old enough to be annoying, it would seem like the fists came from multiple sources, but after serious investigation, I have confirmed that he is one man.

I am a gamer because he was a gamer, and I was thrown into the gauntlet because he wanted a semi-decent opponent at all times. I respect that. However, I did not care for being demolished in NHL '98 time and time again.

We grew up in a crappy town in Central California. We were somewhat late to the Internet, but we utilized our modem to log onto local BBS servers and played the DOOM shareware on direct connect. Then one of the guys we frequently played with, a man who must have been forty, took us out for ice cream. My mother allowed that to happen.

It was a simpler time.

*Legion* is our smartass Bob Costas. Able to throw out stats and drop some serious knowledge on the NFL and its goings-on, when it's football season you'll see his fingerprints all over the Sports Forum.

And whenever there's something going on with Linux, particularly Ubuntu, he'll be the guy who knows something or other about it.

When it comes time for intense PvP games like DayZ, during the few occasions I can drag him to play something that isn't on his enormous Steam backlog, typically he'll be the one to fall in line and follow me on my ridiculous crusades. So that's pretty sweet of him.

1. Who the devil are you?
I'm a 31-year-old California boy now living in Austin, TX. I love: my wife, the NFL, Linux, Vim, slow-paced metal, noisy abstract electronic music, non-respawn methodically-paced tactical shooters, and blaming all of my shortcomings on my Fresno State education.

2. What are you supposed to be doing when you're reading GWJ?
I'm a software developer. These days I mostly write web-based applications in Ruby. I work remotely for the company I worked for in California, and we're in the process of spinning off my department into a new separate company, so lots of excitement on the work front.

3. When and/or how did you get into gaming?
As a very young child, my parents owned an Atari 2600. I have some very vague, fuzzy recollection of trying to play that. However, it was the landmark Christmas of 1987 when I received a Nintendo Entertainment System, along with Mike Tyson's Punch-Out and Breakthru.

A few years later, I got my first PC: a Tandy 486SX/25. I read the DOS and Windows 3.1 manuals that came with the machine, cover to cover. When I got tired of waiting for my parents to install the 3-pack of MicroProse sim games I bought from Radio Shack (F-117 Sealth Fighter, Silent Service II, M-1 Tank Platoon II), I took it upon myself to figure it out. Thus began both my life as both a PC gamer and techie.

4. What is your fondest gaming memory?
So many to choose from. Knocking out Mike Tyson. Yelling down the hall to my friend as we breached a wall in SOCOM II. Buying my first hub in high school and making house-engulfing makeshift LANs on the weekend with friends. Breakaway runs with Fred Taylor in the GWJ NFL2K5 leagues. Getting my first taste of larger-scale multiplayer gaming in Air Warrior. Setting up a Quake server with Team Fortress on a computer at my high school, and spending countless hours on it. Fallout. System Shock 2. Sanitarium. Legend of the Red Dragon on a local BBS.

5. Which upcoming game are you looking forward to most? Why?
Well, what I *should* say is that I'm looking forward to playing the ~400 unplayed games in my Steam account. If there's one game I seem to be good at, it's the "make the number next to All Games go up during the Steam summer/winter sales" game.

I've recently come to the conclusion that games I love, particularly on consoles, are destined to meet the same fate that befall game publications foolish enough to publish Rabbit's writing. The franchises either die or get revised into something awful. SOCOM, NFL2K, Crimson Skies, all the Tom Clancy franchises, Midtown Madness. (Seriously, I played the ever-living crap out of Midtown Madness 3 on Xbox Live. Capture the Gold was more genuinely exciting than anything Burnout has ever done.) Why is there no new G-Police? Where is Jet Moto? Colony Wars? Why am I not playing a crazy PSN version of Poy Poy? If I love it, it dies.

My hope is that with the whole Kickstarter revolution, indie studios will target some of those niches and serve audiences like me. There's a couple of Kickstarter projects like Takedown that promise to fill the tactical shooter void. I can't wait to see if they succeed.

6. What is your favorite game over the last year or so? Why?
Day Z captured my attention like few games have in recent years. I am waiting patiently for the standalone release, which hopefully will successfully stem the tide of the hacking exploits that have plagued the mod.

I am a big fan of games that attach some gravity to death. I love the tension. Anything that makes the self-preservation instinct kick in is very satisfying. I am always on the search for non-respawn multiplayer shooters, because even just having to sit out a minute for the end of the round changes player behavior dramatically.

Day Z, though, takes that self-preservation instinct to the extreme, and that more than anything is what pulled me in so strongly.

7. What is the story behind your handle?
Asterisks are cool. Like bow ties.

8. What first brought you to GWJ? What keeps you coming back?
I skimmed Evil Avatar a bit back in the day, and somehow I ended up here. I came over during the NFL2K5 leagues. Some of the best gaming fun I've ever had were those cat-and-mouse games with GWJers. Also, pushing the boundaries with Certis was fun. Oh, the energy I used to have for such shenanigans...

This is a place where I announced my engagement and was greeted with congrats right after the wedding. Those threads are 6+ years old and many of those posters are still floating around here.

GWJ is a place where I get to act up, when I'm not too tired, that is.

9. Do you have any notable rivalries and/or friendships with someone on GWJ?

As for friends, I've been a bit of a hermit since moving to Austin, but in the precious little socializing I've done, I've had the pleasure of hanging out with some of the Austinite GWJers like Grumpicus, boogle, MyBrainHz, and a number of others - some of who I only really know by their real names. All great guys.

10. Thanks for taking the time to answer our hard-hitting questions! Any last words?
The Kings won the Stanley Cup and I got my Employee Profile. I didn't believe in the Mayan end of the world, but I'm pretty certain we're screwed now. 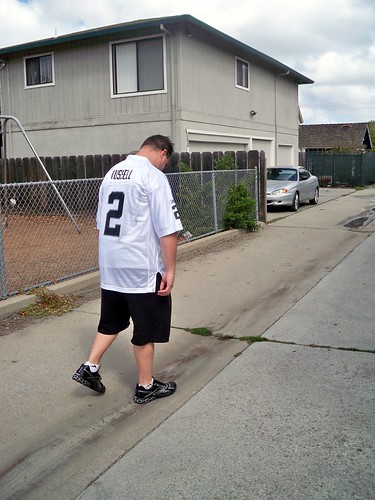 This is, of course, just another escalation in the Certis-*legion* conflict.

All-bus races around the Paris ring road. Could DICE take some of that sweet sweet Battlefield money and maybe make a Midtown Madness 4? And Rallisport Challenge 3. And Mirror's Edge 2. Man, DICE has made some amazing games that a) aren't also called Battlefield, and b) aren't being made anymore.

Gratz on the profile, *Legion*, even though you've now given me a sad.

I for one will be siding with Legion in the forthcoming apocalypse, because if there's one thing I've learned it's that Paul Bettany makes for a dead sexy, badass, tattooed former angel.

They're the same people, right?

*Legion* on the front page with full color pictures and his hit list. How did Certis not add a clause in the CoC against this very thing?

I love: my wife, the NFL, Linux, Vim, slow-paced metal, noisy abstract electronic music, non-respawn methodically-paced tactical shooters, and blaming all of my shortcomings on my Fresno State education

And not necessarily in that order.

*Writes a post agreeing with MilkmanDanimal and including an additional zinger*

[i]If it makes you feel any better, we ran it after midnight, hiding the post early on Saturday morning.

Fantasy football has been a helpful crutch throughout this season.

Enjoy them while they last. Both are signs of the coming apocalypse.

Enjoy them while they last. Both are signs of the coming apocalypse.

But with things like the Bears falling apart in December, I think we have plenty of regularizing forces at work.

Nice profile, one of the better ones I've read.