Here's a thread for reviews, strategies, and turn-based conversation.

My all-time favorite tactics JRPG. I am incredibly excited.

Really looking forward to this one. Never played it. Probably not getting it anytime soon though.

Played it with the JRPG club a few years back and loved it. I'd be perfectly happy for a repolished and rebalanced version again. This will be a "on sale" type option for me since there's other stuff to play for now, but I love that this is one that is getting the remake attention.

Ferret
Posted: November 2, 7:00 PM
No longer illegal in most states

The remake I didn't know I wanted until I heard of it, and then suddenly I wanted it very very much.

The rebalancing sounds cool as can be. The HD art feels a bit off.

I can't remember much about the original game other than the similar mechanics to FFT. I can't even remember how far I got along the story before I was distracted by other games.

What I do remember is that Archers were deadly.

I've been wanting another entry in the Ogre Battle series for a long time. I wish it was a new title but a remake with changes is the next best thing. Playing through Triangle Strategy I kept wishing it was as deep as Tactics Ogre.

I really ought to have another go at getting through Tactics Ogre—I do like the game, but I always get distracted and end up putting it down for a while, so I've never actually finished a playthrough. The thing is though, I've still got my PSP copy, so I'm not sure it's actually worth getting it again on Steam. I'm more interested in new content than I am in upscaled graphics or added voice-acting, and I'm not sure reverting to experience-by-unit rather than experience-by-class really matters to me. So it comes down to whether the remake actually adds anything substantive to the gameplay.

If I might make a suggestion, there is a One Vision Mod that changes up the base game if you are on the fence about the remake.

If I might make a suggestion, there is a One Vision Mod that changes up the base game if you are on the fence about the remake.

That mod looks interesting actually—thanks for directing me to it. It would certainly take a lot of the sting of starting from the beginning yet again if I did go back to it.

The GBA title The Knight of Lodis is the easiest to get into though I haven't tried the One Vision Mod.

I actually played Knight of Lodis to completion some years back. It was pretty good.

Ferret
Posted: November 11, 2:35 AM
No longer illegal in most states 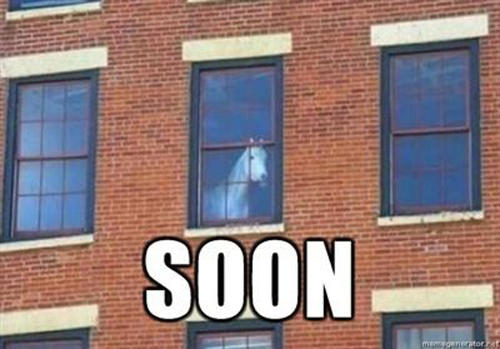 The reviews are pretty solid too, which I admit surprises me a little, as much as I've been looking forward to it personally, I didn't imagine it'd be pulling mid-high 80s.

Yeah, The review are super encouraging! Having never played the original or the original remake, I’m looking forward to seeing how this game intersects with all the games it influenced.

Today is a reaaaalllly loooooong workday

The reviews are pretty solid too, which I admit surprises me a little, as much as I've been looking forward to it personally, I didn't imagine it'd be pulling mid-high 80s.

It sounds like they did quite a bit of work smoothing over the rough edges and making QoL improvements, which I was not expecting of this remake.

I won't be picking it up at launch, but it's going straight to the wishlist for an early sale.

I'm on a tight budget at the moment, so the $50 price tag feels waaaaaaay too much "money for old rope" for me.

I was expecting a $20 remake. I'll bite later when it's closer to there.

Ditto here. Triangle Strategy didn't really scratch the itch so I'm very interested in this, but not $50 interested.

Ferret
Posted: November 13, 11:51 AM
No longer illegal in most states

I'm loving this remake. I can acknowledge $50 is expensive for a remake, but for a diehard TRPG fan (and also, specifically, a Tactics Ogre fan in my case), I'm happy to have paid it.

Some small crafting related tidbits that I'm glad I noticed (only spoilered in case there are folks who don't even want details about mechanics spoiled) I don't remember if all of these were true in the PSP one, it has been too long since then.

1) Once you get the first crafting book, several others are added to the store. All of them, except perhaps the Jewelry one, are immediately useful.

2) Not all "+1" weapons in the Weapon book are created equally: in a few cases, usually exactly one per weapon type, a weapon gains an "on hit" effect. This is not always granted to the strongest +0 in the category, so it is worth checking and possibly considering switching to the weaker type if its +1 has a neat "on hit" bonus.

3) Probably most importantly, all of the initial gauntlets give +1 Jump when upgraded to +1, and even better, all of the initial leg armors give +1 MOVE when upgraded to +1! Additionally, Magus Robe gives Wade 1 (movement in water allowed) at +1. Upgrading these helps a ton with movement, especially the units who have 3 Move and 1/2 Jump by default.

4) It doesn't cost much to upgrade Magic Leaf all the way to Magic Seed, and it is (other than the Goth spent) a 1 to 1 exchange. You still can't (at least with the initial books) directly make/buy Magic Leaf, but at least you can make the most of each one you found by taking it from 20 MP gained to, I think it was 80?

It has it's hooks in me good. I can't stop playing

The only reason I was able to stop playing was my Switch battery died. I want to dip into Pentiment this week but I don't know how to not play Tactics Ogre.

Ferret
Posted: November 16, 6:40 PM
No longer illegal in most states

I want to rave about my best friend in Tactics Ogre: the can-opener!

(Spoiler: discussion of a class not immediately available, you can first get them around the end of Chapter 1 or maybe early Chapter 2, can't remember for sure.

By can-opener, I mean a very specifically kitted Terror Knight.

Terror Knights are already great at inflicting Frightened, which reduces all forms of offense and defense for the target by a moderate amount. One of the main ways they do this is Fearful Impact (25 MP: Next attack inflicts Frightened and has 100% Accuracy)

The 100% Accuracy bit turns out to also mean "100% chance to inflict any on hit effects the weapon has". Combined with a Zweihander+1 (which you can make as soon as crafting is unlocked) that inflicts Breached (large reduction to physical defense), you end up applying both Frightened and Breached in a single attack with a 100% chance for both.

It would be difficult to overstate how absolutely screwed an enemy with Frightened + Breached on it is if *any* kind of serious physical attack comes looking for it: finishing moves, auto-crits from Skills, Attack Card boosted allies. 4 digit damage won't be out of reach, which is funny coming at a time when few things have 4 digit HP yet.

I suspect the 100% accuracy = 100% chance to apply "on hit" thing may also apply to other sources of 100% accuracy for attacks, but at 25 MP, Fearful Impact is the cheapest of these, at least that I've seen so far, and coming with a status effect that is useful to inflict on anything in any circumstance is a nice bonus.

Really looking forward to this one. Never played it. Probably not getting it anytime soon though.

Ferret, I specifically complimented that build on the coming episode of the CC, but I incorrectly attributed it to Stele - my apologies!

It does indeed kick ass. That unit has just been terrific. 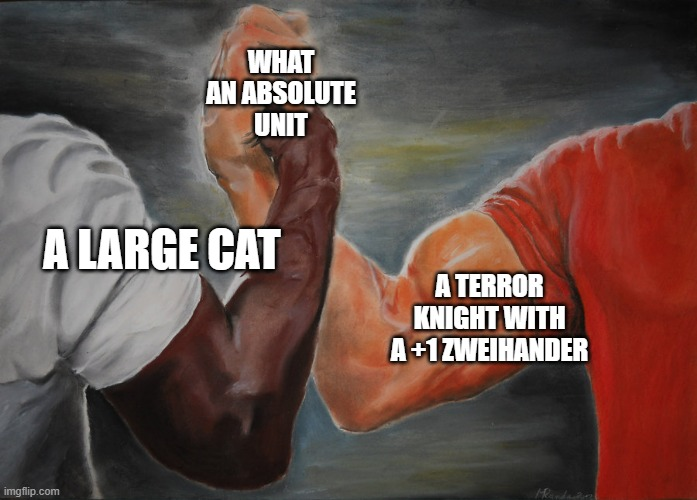 Ferret
Posted: November 21, 1:55 PM
No longer illegal in most states

No worries, I'm just glad you're having fun with the build too.

My Terror Knight is still one of my favorite characters and is still using that setup, many game hours later (though I'm staring longingly at the crafting recipe I have for a much stronger two-handed sword that also gets Breached on hit, can't make it yet though.

Brand new to the game and barely in. There are class builds? You had me at Terror Knight. Where do I learn what this build looks like?

I think you can start using them around Chapter II.

Builds are absolutely about what skills, finishing moves, equipment, and class you are rolling with. The game is surprisingly deep. If it is helpful, on the up and coming CC, Amanda and I did a bit of a deep dive on tactically how this game varies from other tactics game.

Ferret
Posted: November 21, 8:34 PM
No longer illegal in most states

Terror Knight itself is a class (separate from the Knight class you have available immediately): I think you first unlock them towards the end of Chapter 1 or early in Chapter 2. You can either Recruit one (a skill learned by Knights, Rune Fencers, Valkyries, and Clerics) in a non-training battle, or wait until a Dreadknight's Mark (I think that is what the Classmark for Terror Knight is called) drops/shows up in shops and convert any human unit into one.

Anyway, as characters gain levels, they unlock skills for their class, quickly passing by the limit of 4 you can equip at once even discounting things you wouldn't use a bunch of together like weapon skills.

The Terror Knight build Harpo and I're talking about is really just pairing the Terror Knight skill Fearful Impact and a specific weapon, a +1 Zweihander together. (I explained in the spoilered post above why this is nice and how it works if you want more details.)

But, that's hardly the only way to build a Terror Knight. For example, they also get a different skill for causing Frightened: Lament of the Dead, which just randomly and passively spews it out to anything close to them at the start of each of their turns. A Terror Knight with that would probably also want Rampart Aura (enemy units have to stop their movement when moving close to the Terror Knight unless they started close to it) and HP Up (more MaxHP) since it's going to want to dive into thick of lots of enemies to take advantage of the area effect Frightened from Lament.

On the other hand, one using Fearful Impact instead of Lament would maybe not need to be as tanky since it'd only make sense to go for one target at a time, so they might take Concentration (boosts Spell status effect accuracy) and fling status effect spells like Sleep and Slow when there isn't a target handy for Fearful Impact.

Or, on the um... third hand, you could use both Lament of the Dead and Fearful Impact, hoping that Lament will cover incidental targets but still having Fearful Impact available if a specific target absolutely must be Frightened immediately.

And all of that is without considering any further equipment synergies like the +1 Zweihander and Fearful Impact thing.

So yeah, there's definitely a lot of ways to build each class out.

Even all that Terror Knight stuff I wrote just now is only based on being roughly halfway through the game: there will be more skills/equipment available for more ideas later I'm sure.

Thank you both for the depth of comments. Wow, I need to put some time into this game over break. Happy Thanksgiving!