Always. Softshell is awesome, grilled. We could have a cookout on the beach! Bring lots of crabs.

Not sure I like the new credits yet. Will see if it grows on me.

Enjoying the show so far, but miss the humor a bit from early GoT. Think that mostly came from Tyrion and Arya.

Do think the political stuff is well done so far, as is the interpersonal relationships. Doing really well filling in the human side of the stories from the book.

This starts with a breakdown of the opening credits:

Question about the Velaryon house. In the book lore Targaryens married with Velaryons. The king and his sister are both descended from the 2 houses. In the last episode, Corlys is adamant in uniting the houses, but aren't they already united? Is this different in the show?

Step 1: Marry the 12-year-old to placate her powerful father.

Step 2: Don't sleep with her or anything, that's gross, don't be gross.

Descended from is not the same as politically united, slazev... That's how I read it in the book. Uniting the factions.

Ok, I understood he meant uniting the families through blood.

No, I gotcha, and you might be right, but that's not what came to mind for me. The marriage proposal was for current political reasons, not as "hey we've never done this before, let's try".

And it would the right call (ugh, feel like a creep writing this; fun medieval times), but that guy is showing a knack for bad decisions. "Not good at being king", indeed.

If I remember correctly, this story starts about a hundred years after the invasion. Things have been pretty peaceful, so factions have arisen just out of friendship, competition and economics. Now, though a succession crisis is brewing, and of course, one of the ideas to fix that would be to simply combine families, so the major factions are represented, and try to patch things up that way.

Unfortunately, a king who has never had to be strong had an ambitious son, a capable daughter, and some nobles who want their turn on the ouchy throne. And thereupon hangs a story...

Would you say it's a... game of thrones?

Watch out, he's beginning to Targ!

Disclaimer: I didn’t read the book.

I kept my expectations low going in and I have to admit I’m quite enjoying it so far.

For all the complaints online that Episode 2 was just a lot of talking, I found it pretty compelling. I like that Daemon seems to be more nuanced than the typical villain. He genuinely seems to care about his niece - at least for now.

The ONE scene though that almost ruined the whole episode was the “twist” with the King. They took a character that was very deliberate and thoughtful who met with his Master of Ships, his Maester, and even his daughter - and then he holds a meeting the next morning and is is all, “ha ha fooled you!!!” It seemed like a surprise for the sake of a surprise - that the audience saw coming a mile away anyway.

I kind of agree with you. It seemed a very "TV" thing, at least the way the show presented it.
On the other hand, Viserys has proven to be a coward. He's really not into confrontation or just being direct with people. This is just another example of that.

Yeah I felt like they didn't do a good job of establishing why the king would choose Alicent, even though we as the audience knew it was coming. Maybe they'll flesh that out a bit more in the next episode.

I'm really enjoying the show, but I do miss some of the humor that offset all the seriousness that early seasons of GoT's had. The Tyrion quips, the Jamie stuff, sometimes Arya, etc. 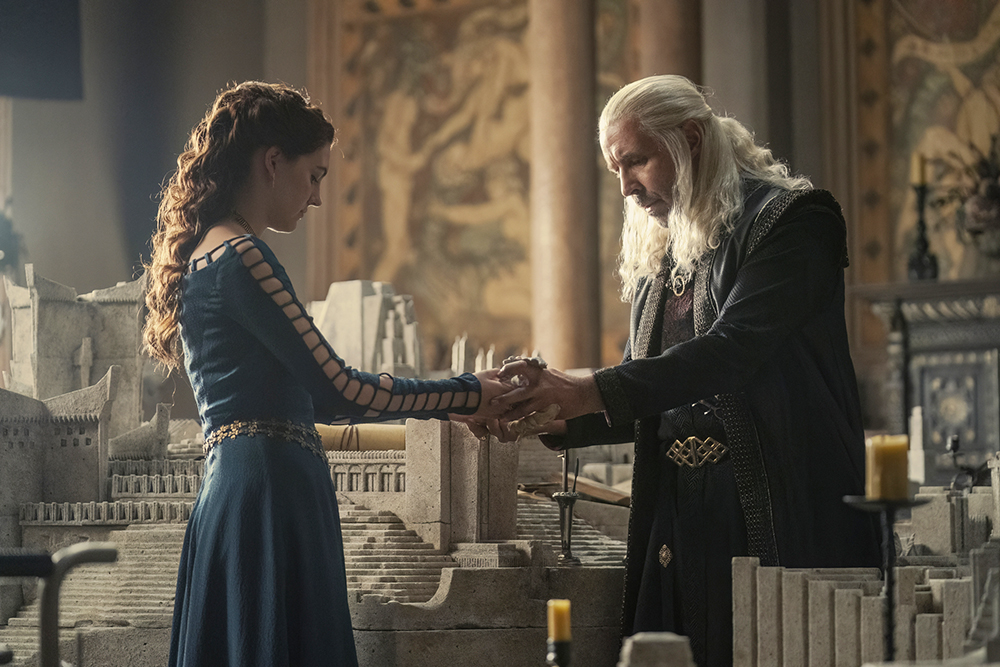 I found myself struggling to get into this most recent episode. Even the battle scene at the end didn't really do anything for me, and it seems like the internet really loved that entire sequence. It was nice when Rhaenyra and Viserys finally sat down and just talked with each other - something that would have preempted all of the angst and tantrum throwing from both parties throughout the episode. I guess in terms of characterization and relationships, this episode didn't show anything that the previous two didn't already.

I commented to my wife that one of my complaints about the later seasons of Game of Thrones was that there were so many characters and storylines that it felt like they didn't get to spend enough time on them individually. Here, lingering on these characters is making me impatient to get to more plot. I am a hypocrite I guess.

Yeah, it wasn't a bad episode but it didn't seem to move things forward much either. Definitely felt like the kind of mid-season episode where they've already set everything up and they're not quite ready to start gearing up for a climactic finale yet either so things are kind of in a holding pattern for now.

The action on the Stepstones was not particularly engaging from a "badass action scene" perspective. It wasn't just there for that, of course: it served Daemon's character, showing once again how desperate he is for his family's love and approval that he would rather die than have his big brother bail him out and come home a failure. I just think that point could have been hit more economically in terms of both screen time and, probably, budget. I found myself a little nostalgic for the way the first couple seasons of Thrones would often show the beginning of a big battle and then cut straight to the aftermath for budget reasons.

Same deal with all the stuff in the Kingswood: it did a fine enough job of showing the new status quo after the time skip, but it lingered just a little too long establishing what it needed to establish and wound up overstaying its welcome.

The whole episode felt like it could have been as effective or possibly more so in half the runtime.

Some people are getting whiplash from the time jumps, some want it to go even faster.

I liked this episode. It did a lot for setting things up with symbolism and showing just where Viserys mind is. He's indecisive about the heir because of his dragon dream's conflict with reality. And the thing that he thought would lock in the need to move on from Rhaenyra to Aegon as heir, the white stag, turned out to be a normal stag for him that he couldn't even kill properly when the thing was tied up for him. So he gives up on what he thought the dream told him was important (his son being the savior), and says that Rhaenyra is still heir. Combine that with Rhaenyra seeing the white hart and letting it go in contrast.

Then you have both Rhaenyra and Deamon both showing in contrast to VIserys that they're people of action that will get bloody when it's called for, and I think this was more than a filler episode. I think it's definitely the mid-game where the chess pieces are getting set up.

Plus, we've got the third dragon on screen now.

With the time shift forward a few years the one thing I noticed with Viserys now two of his fingers have rotted away. They didn't seem to make mention of it or focus on it. Was just a few scenes where he wasn't wearing gloves that he had his hand on a chair and could clearly see both of them gone now. Can't imagine what his back looks like now.

Definitely makes for a different vibe from the book, where he was 28 before the time skip. Between the 48 year old actor, the white Valyrian hair, the permastubble, and the never healing cuts, it definitely lends an extra sense of urgency to the matter of Rhaenyra's marriage and the succession in general.

I'm constantly having to remind myself how young Rhaenyra is supposed to be. The episode made it seem like she's spent two years just sulking and assuming she was being passed over. What is she, some kind of... TEENAGER? ...Oh, right.

Still, I found myself missing the proactive girlboss from the first two episodes who jumped on her dragon and demanded that her uncle return her castle and dragon egg.

Yes, it's heartwarming that Viserys reaffirms her as heir, but that's less than half the battle, because it's his bannermen that she'll have to convince to accept her. It's just common sense that she'll have an easier job of doing that with a husband from a powerful family with a vested interest in helping defend her claim and a proven track record of producing heirs. It weakens her character that she needs her drunken ineffectual dad to tell her that. 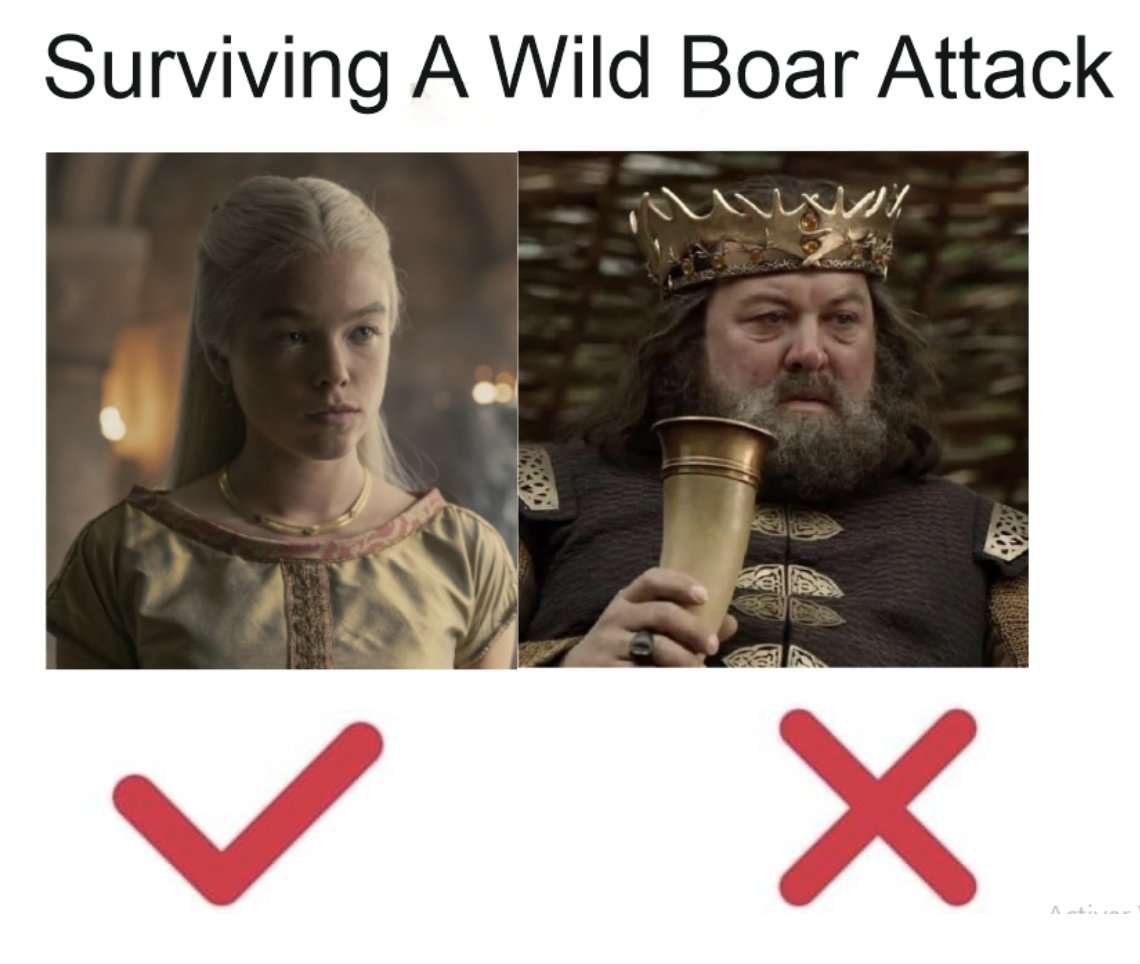 The boars. Robert killed his, too. And it was reportedly monstrous in size.

He was also on PDD's. Performance Decreasing Drugs. 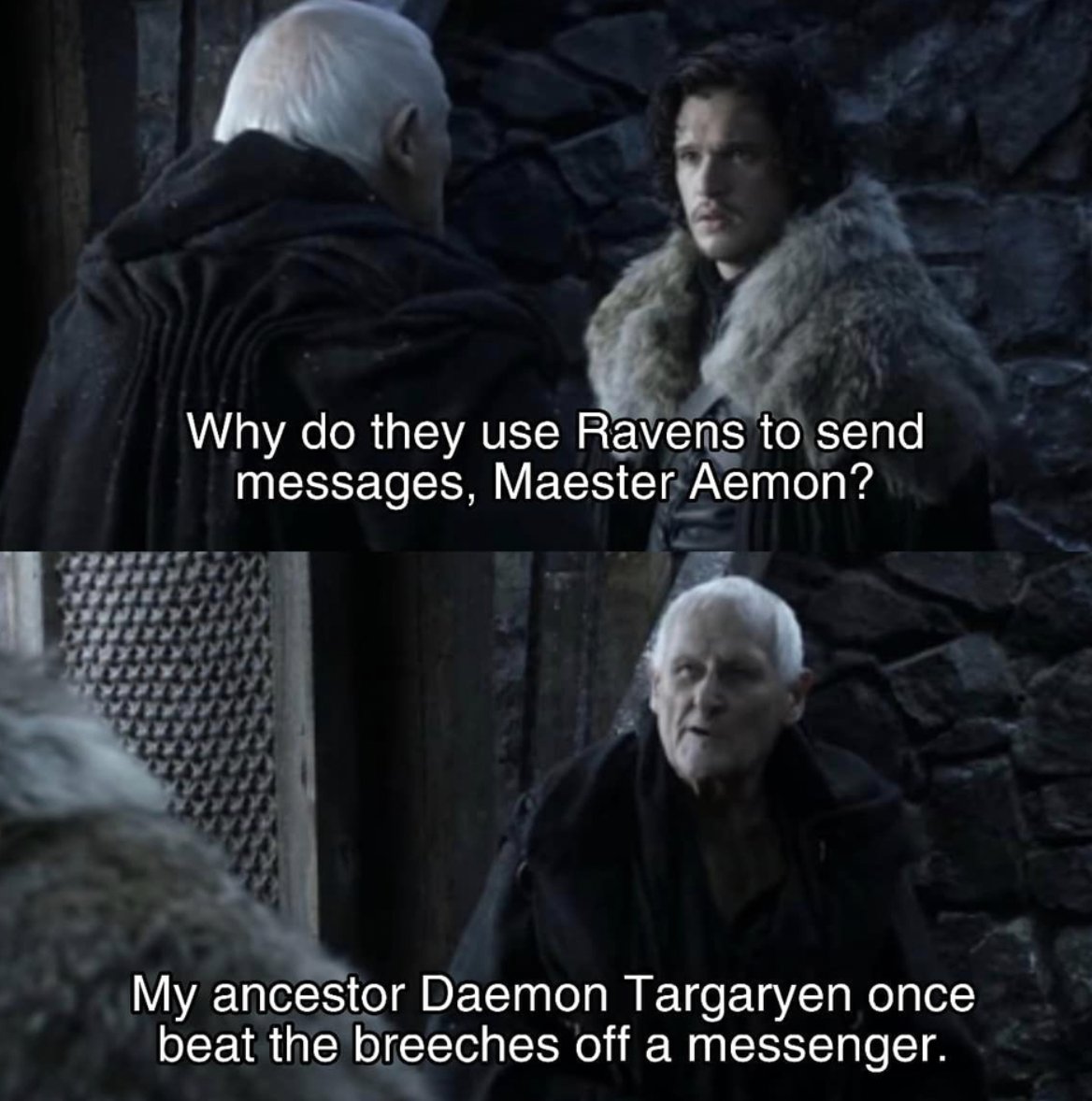 I feel like I'm watching a LARP of a Crusader Kings 2 session I played some years ago.

...I completely forgot to watch the new episode last night. I'll have to get to it later this week.