Werewolf is not a good mix with survival mode. I hadn't stopped to consider that werewolves do not gain sleep benefits, which are a fairly big component of survival mode. I guess I'll have one thing left to do after completing the quest line.

I'm thoroughly enjoying the slow pace, no fast travel, of survival mode. Possibly for the first time I get my task, look at the map once, then head out using only environment, trail signs, and memory as my guide. That's something I never really did fast traveling everywhere. Even when I attempted to no fast travel in the past, I still found myself "just let me teleport to sell then teleport back really quick". This forcing it was a good thing.

I'm amused that I just worried about spoilers while typing that about a 10 year old game that nearly every gamer alive has likely played.

BTW, I took screenshots of a vanilla XBX start and the modded list I posted last page. There's, admittedly, not a lot of great screenshot spots early on to showcase the visual differences outside of a lot of fog added to the modded one. However, once you get inside a building it's way noticeable.

Anyway, I'll post later tonight when I get a chance to sift the screenshots.

I can't tell if my Skyrim is now running at 60 fps. When I hit the Xbox button only auto hdr is showing. No FPS boost. I do have the uncap FPS mod running. Hmm.

Oh, it's absolutely running at 60 fps by itself, you don't need FPS Boost anymore. (I'm not sure if the unlocked mod still works or not as I've never used it. The PC version is notoriously finicky to get framerate unlocked.) 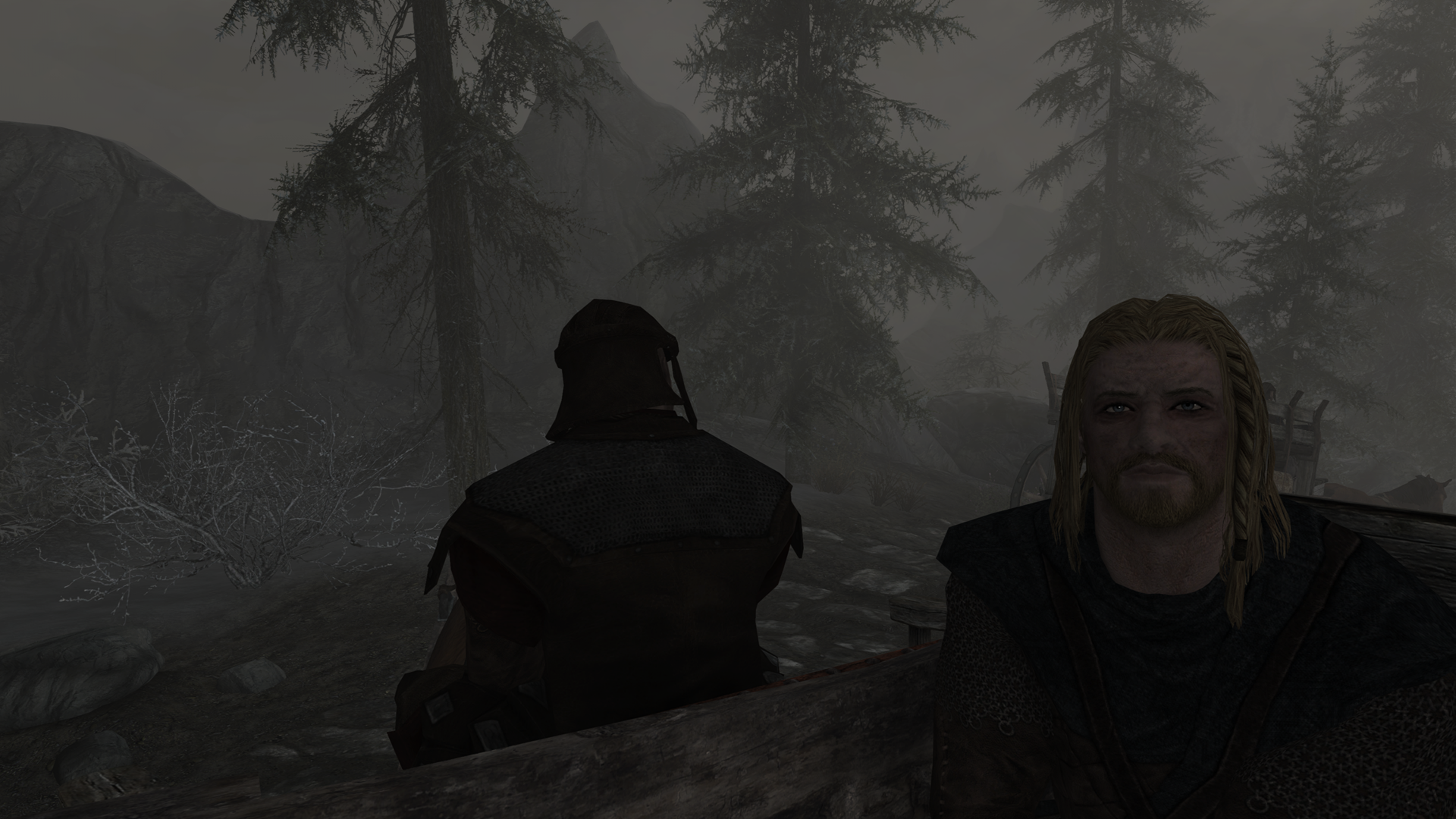 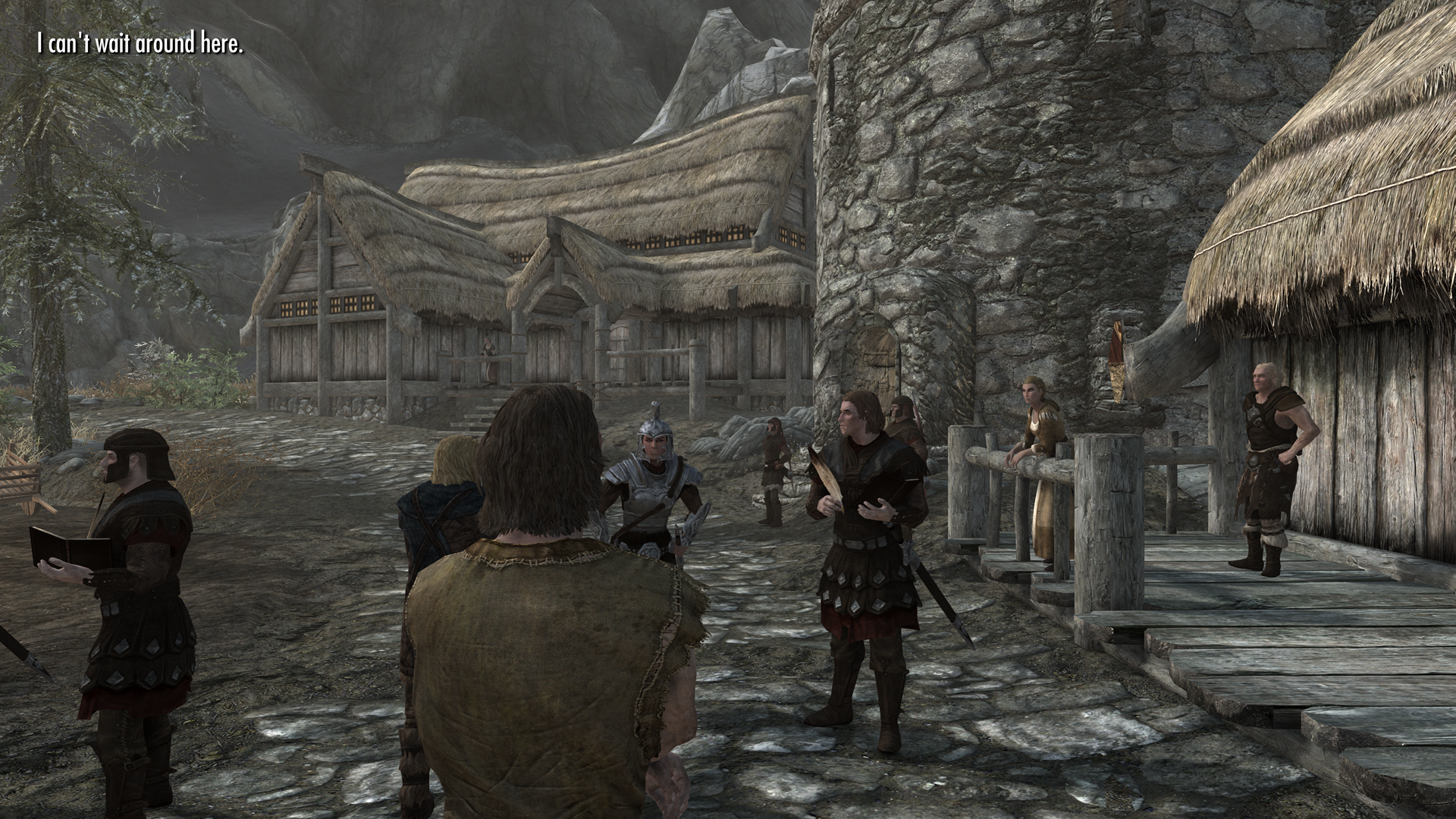 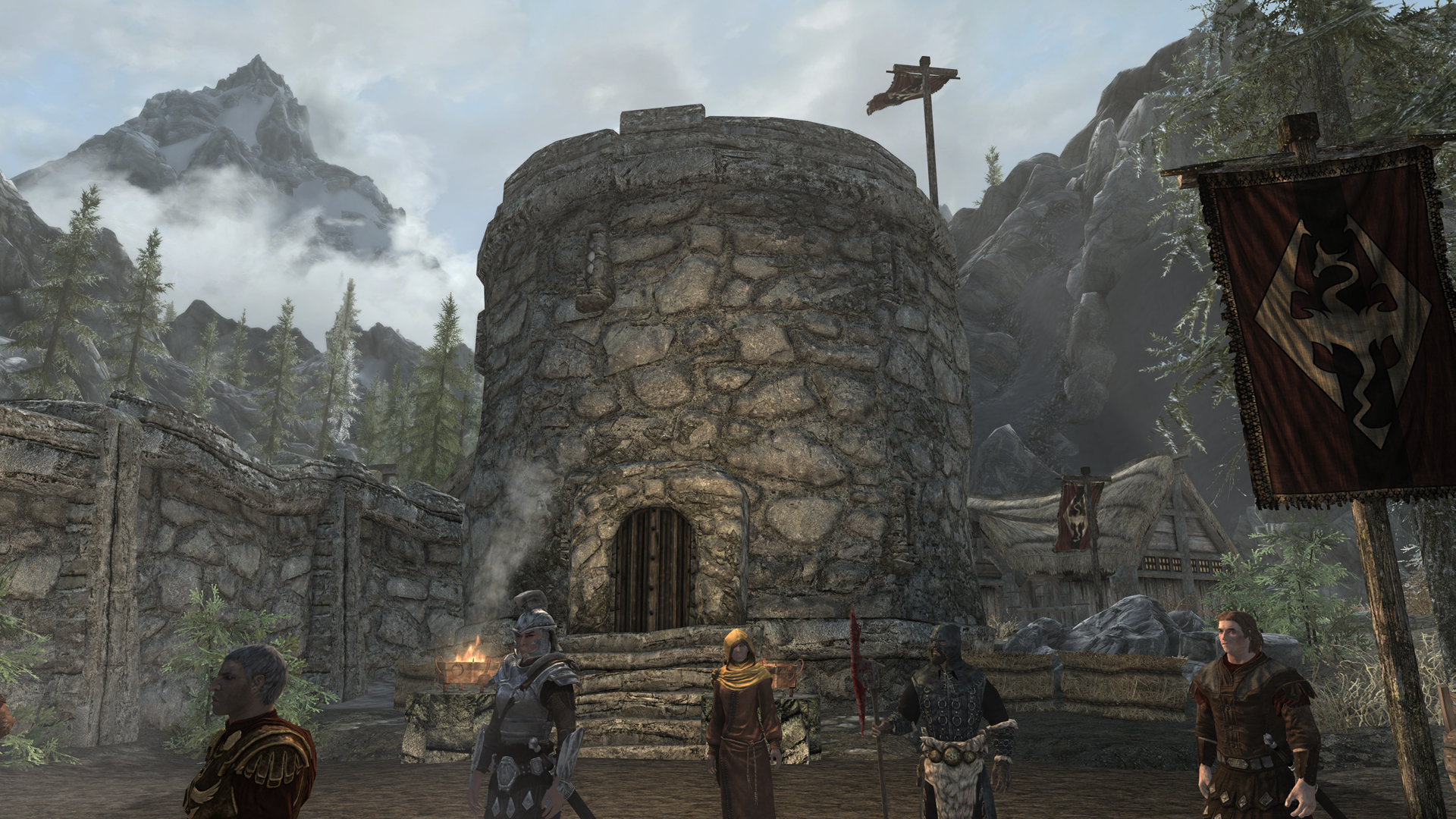 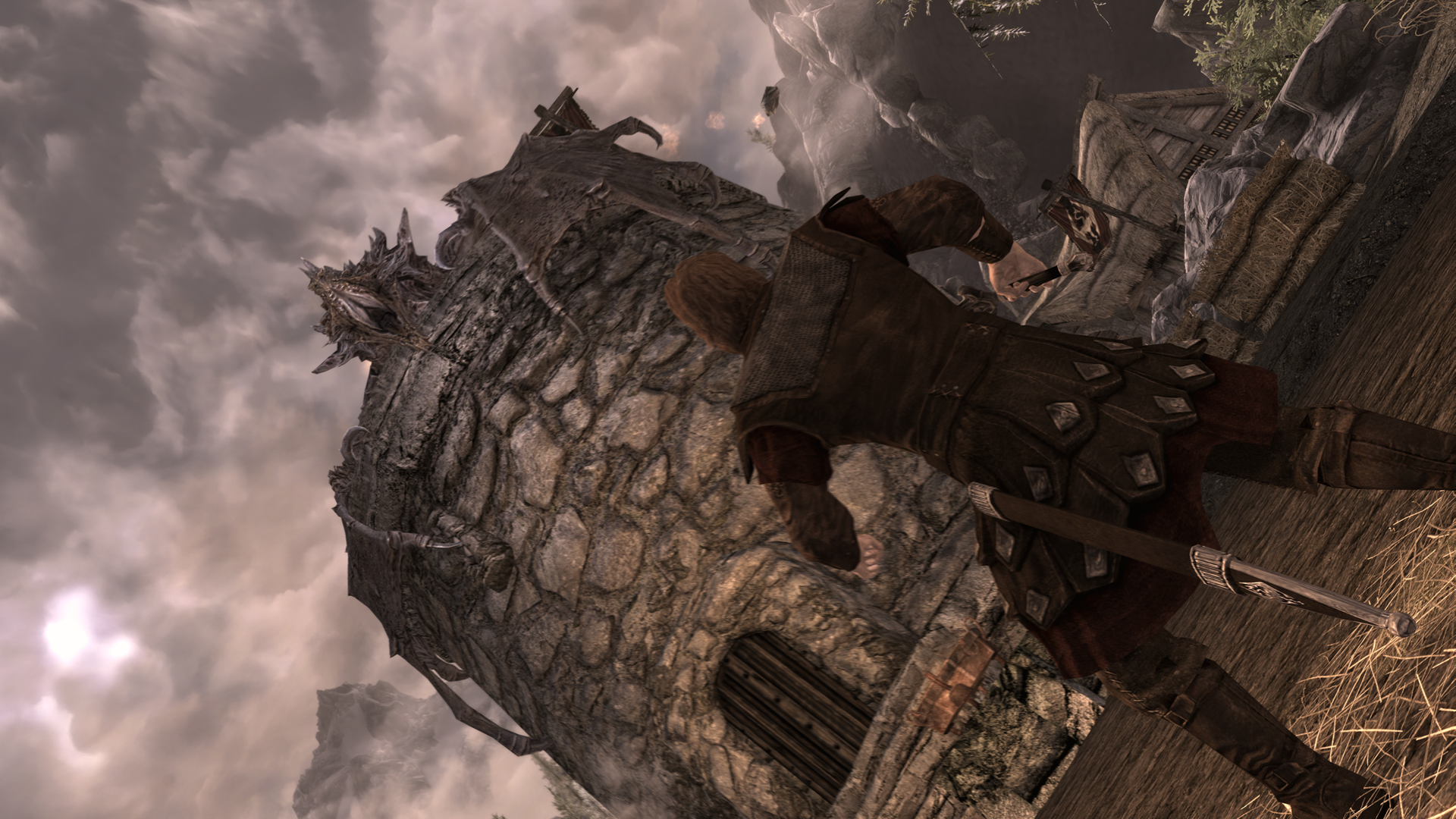 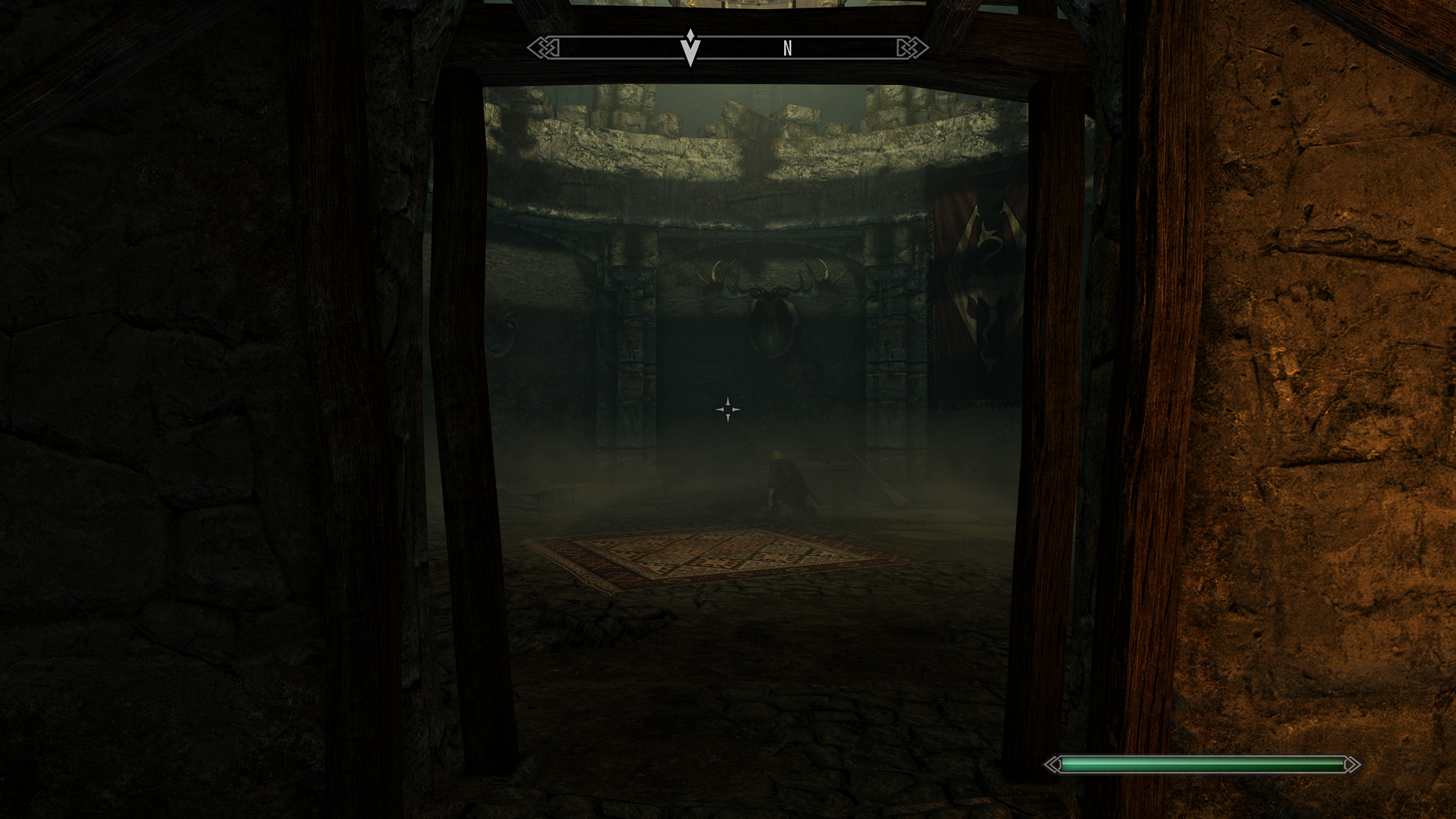 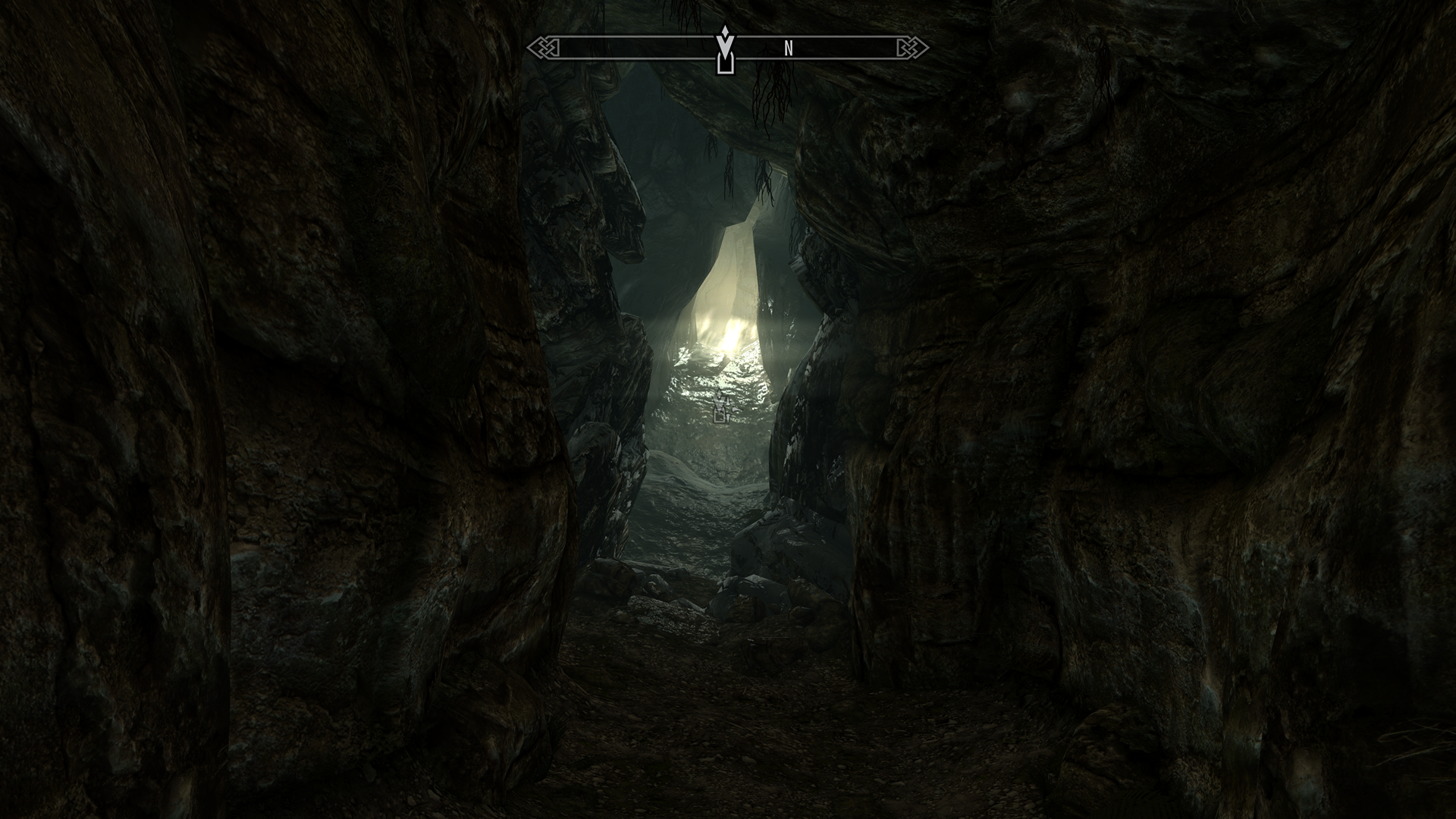 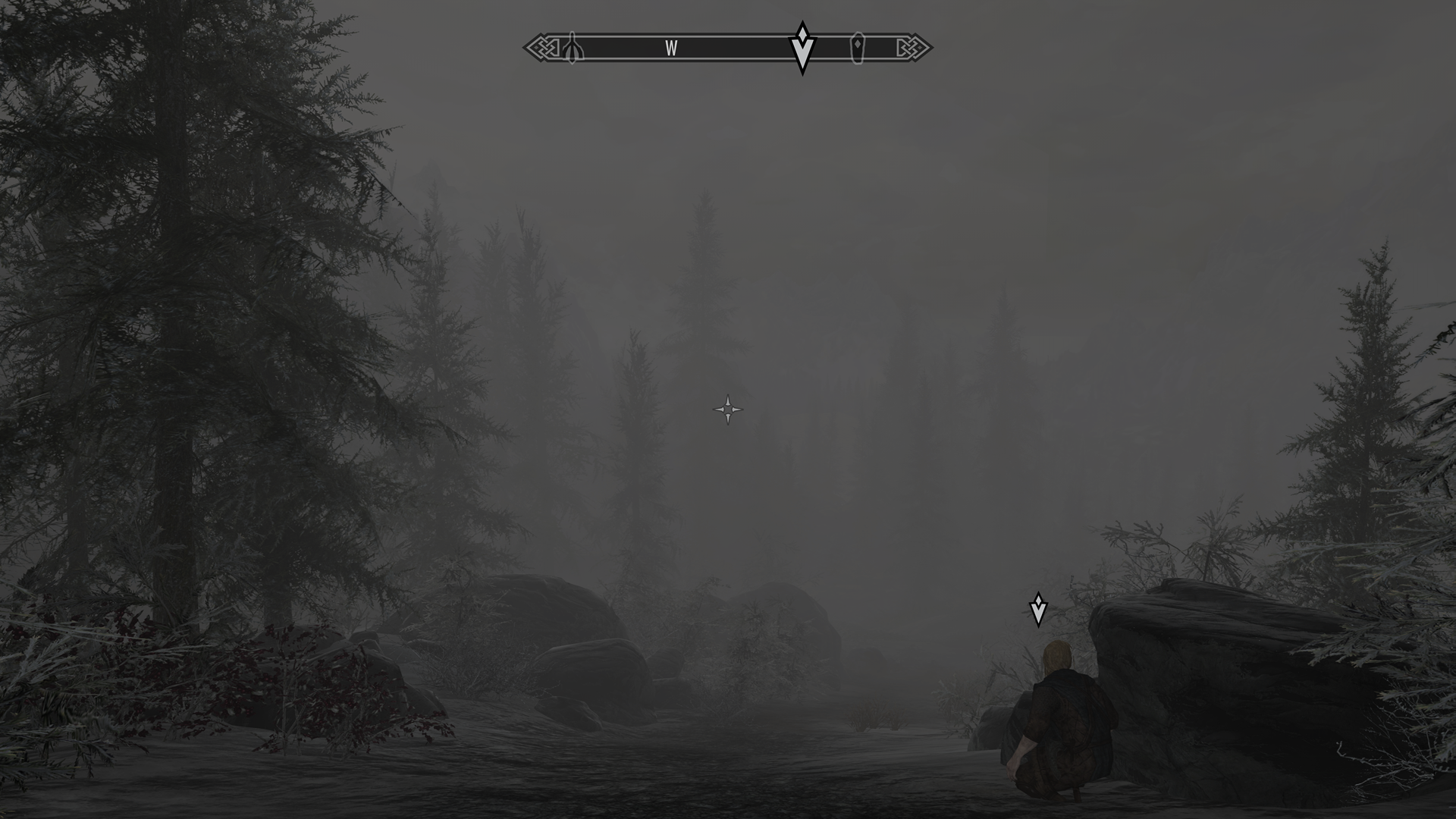 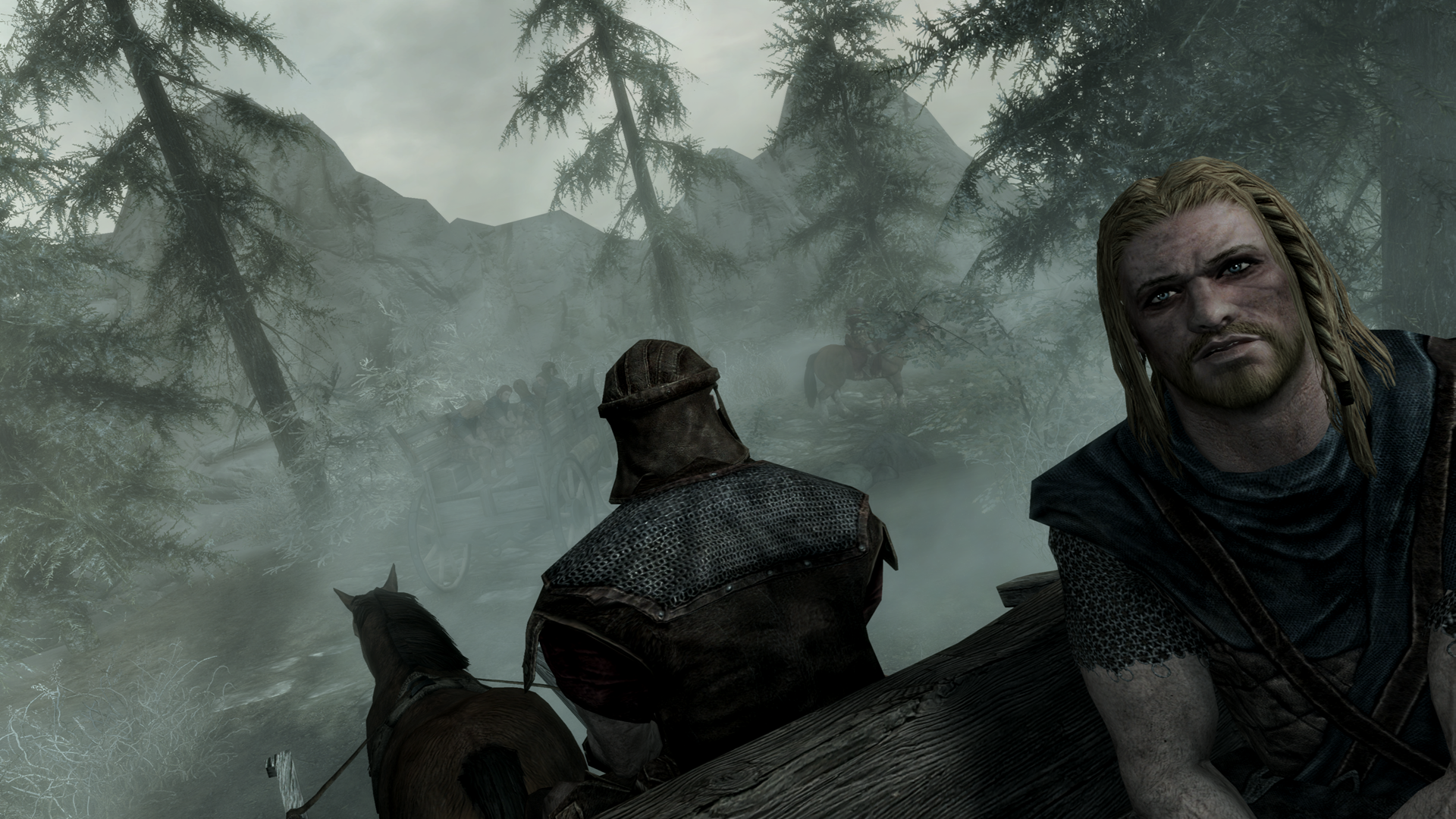 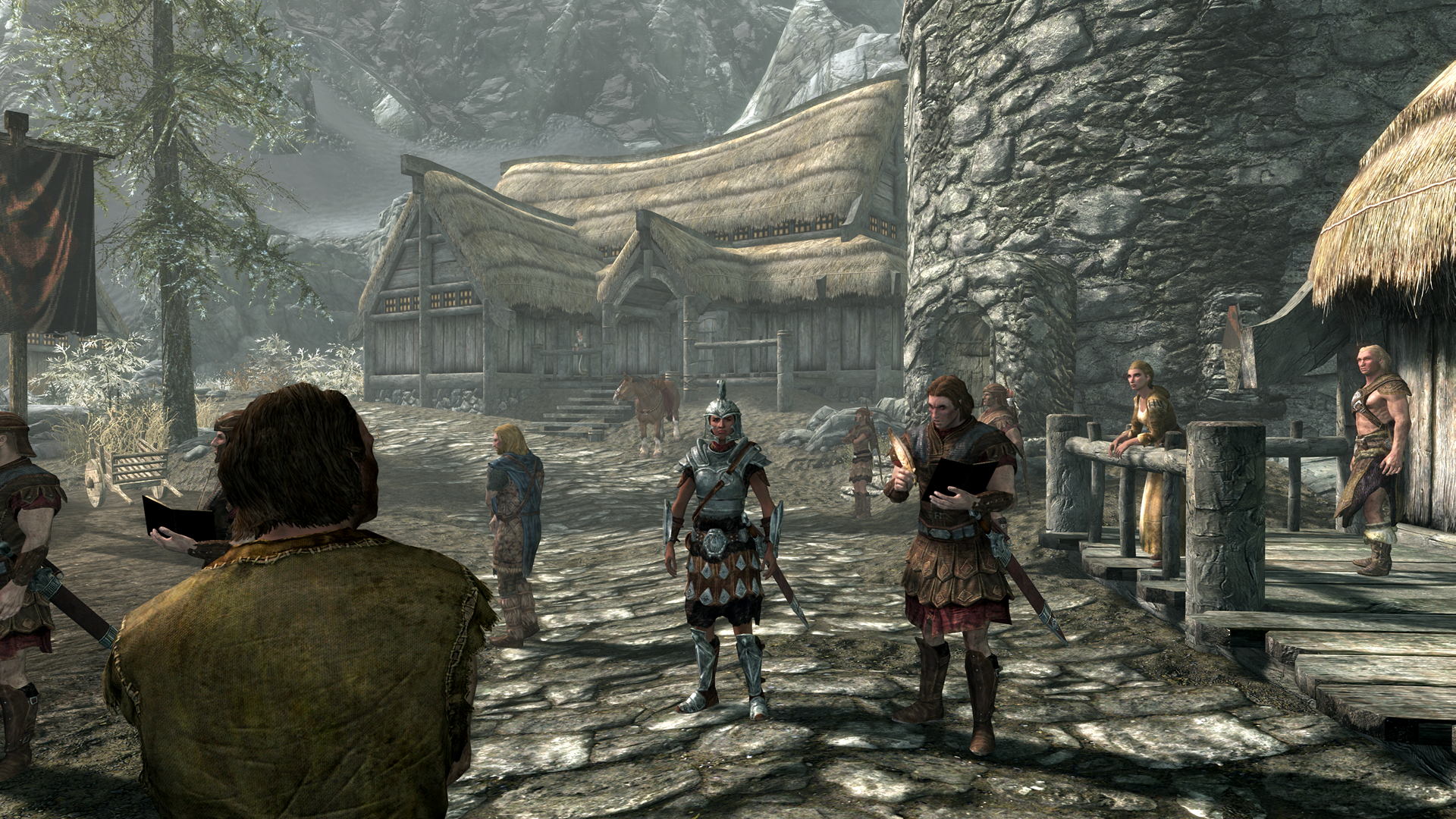 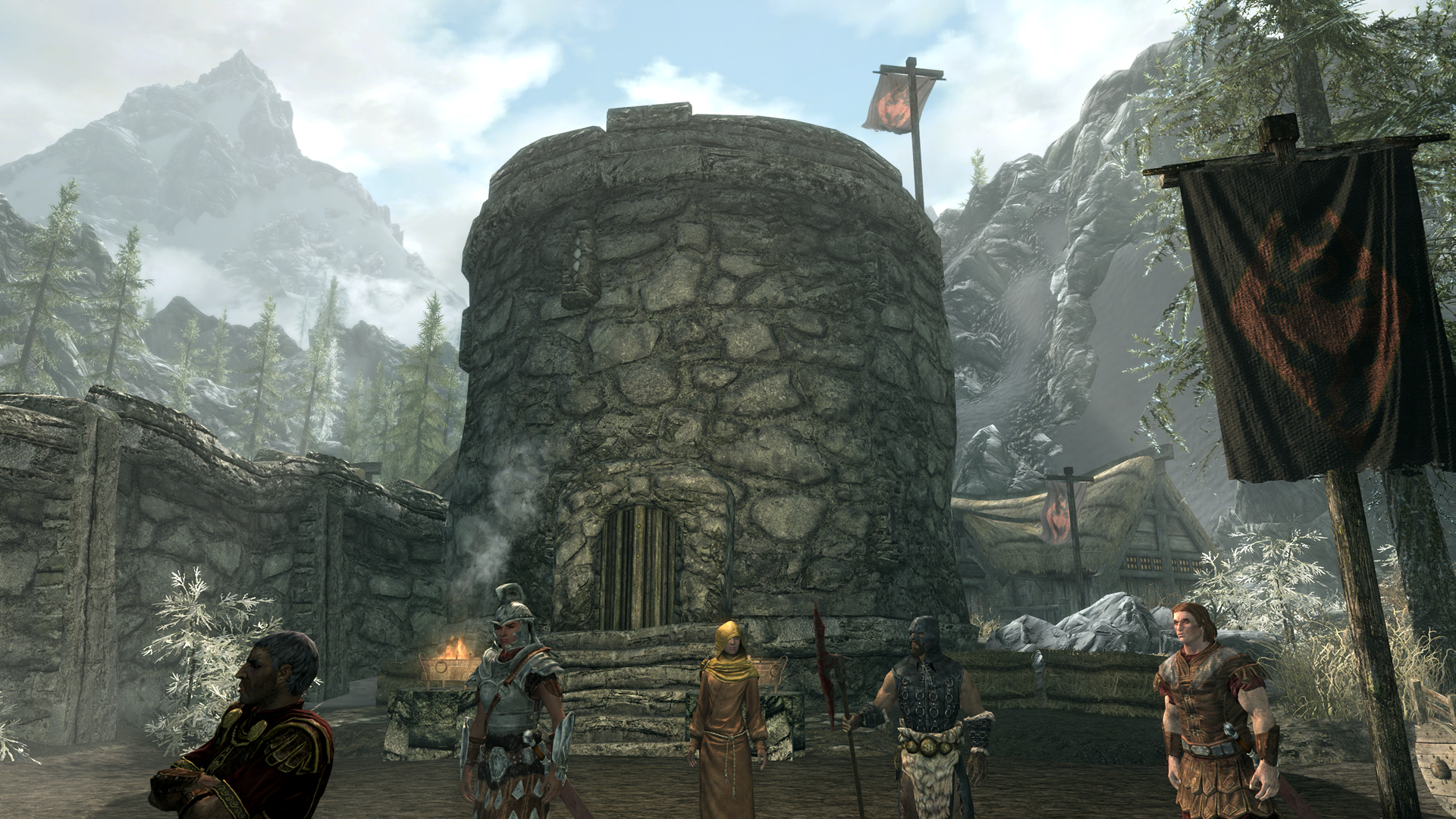 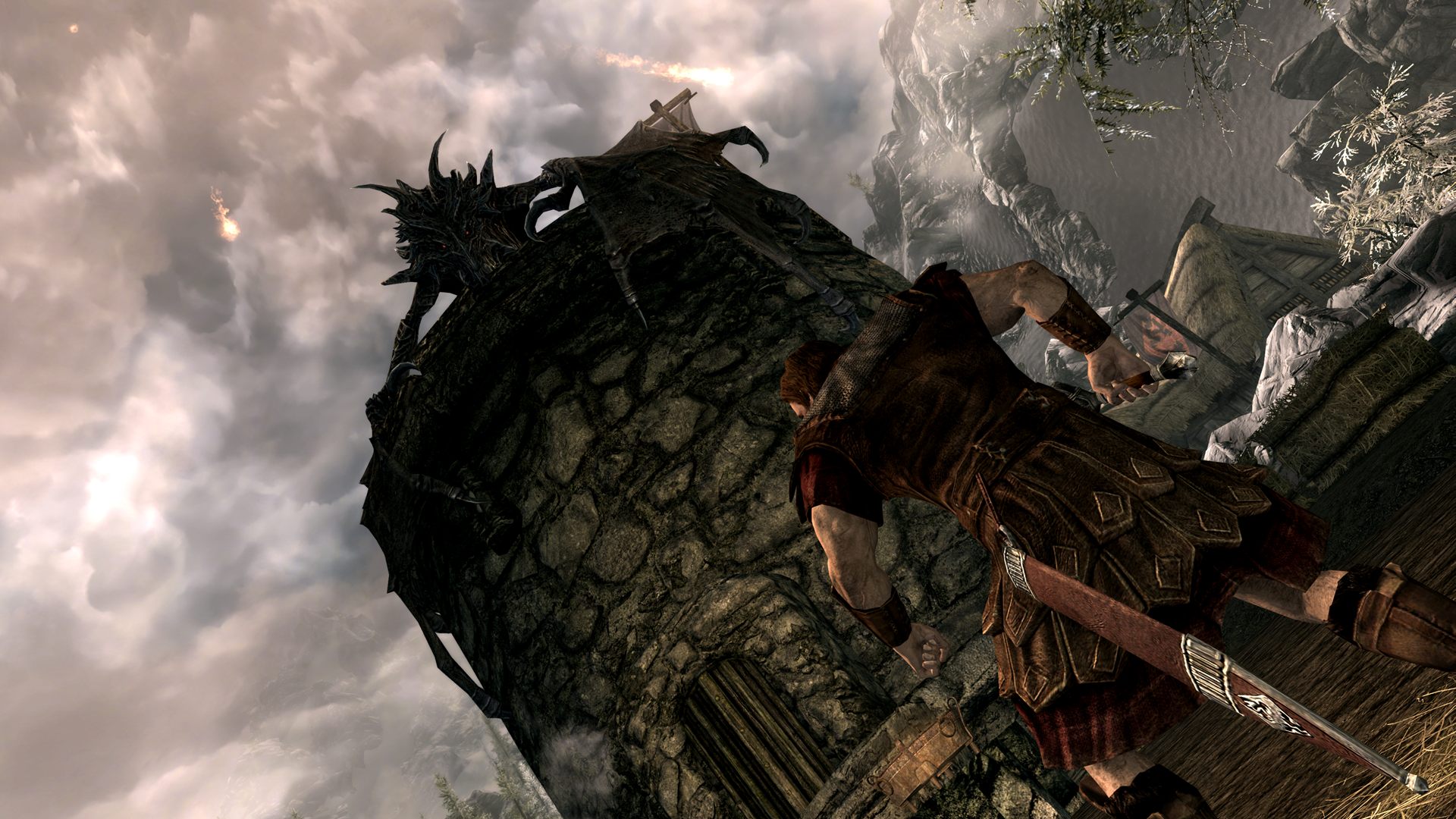 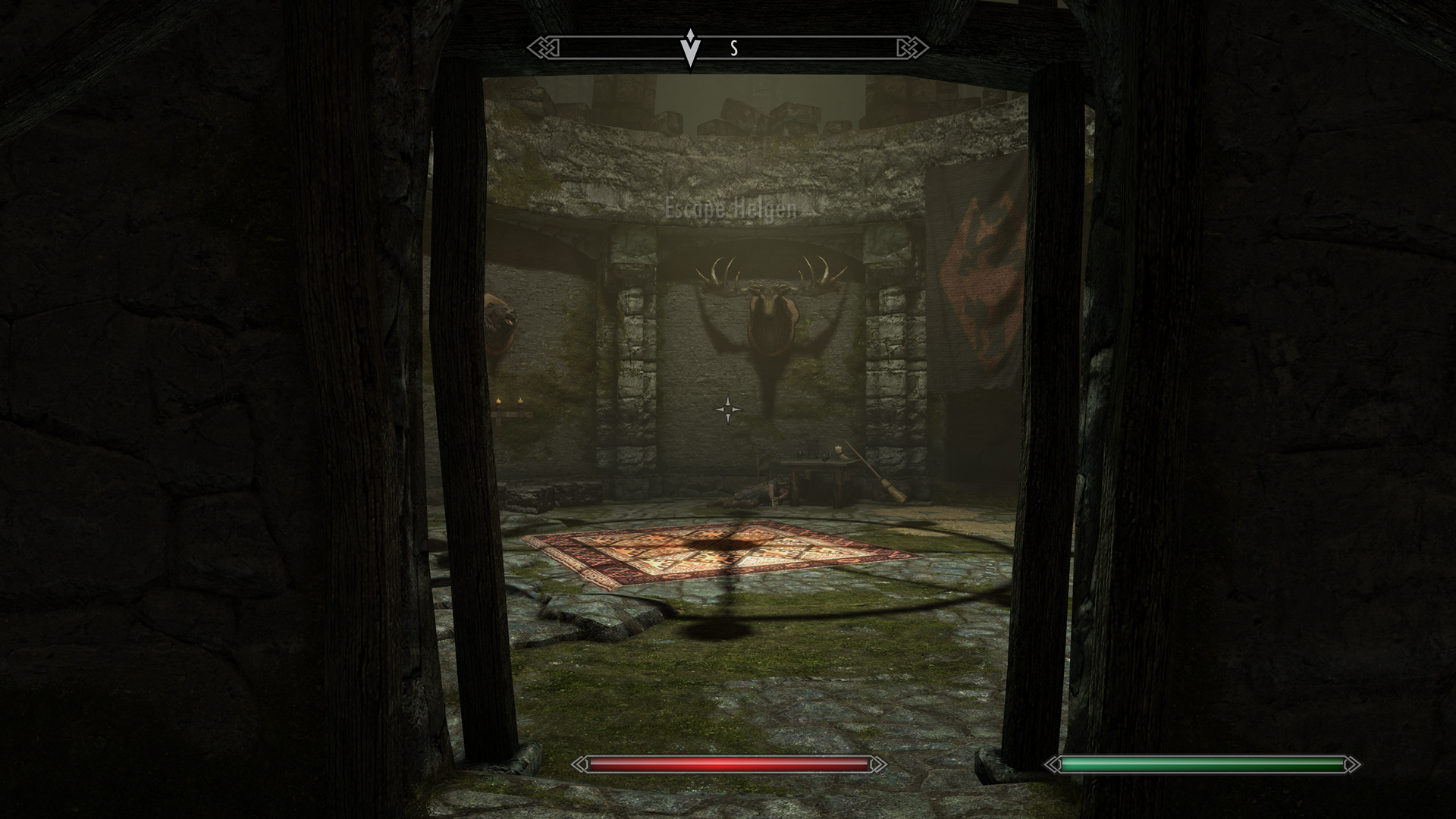 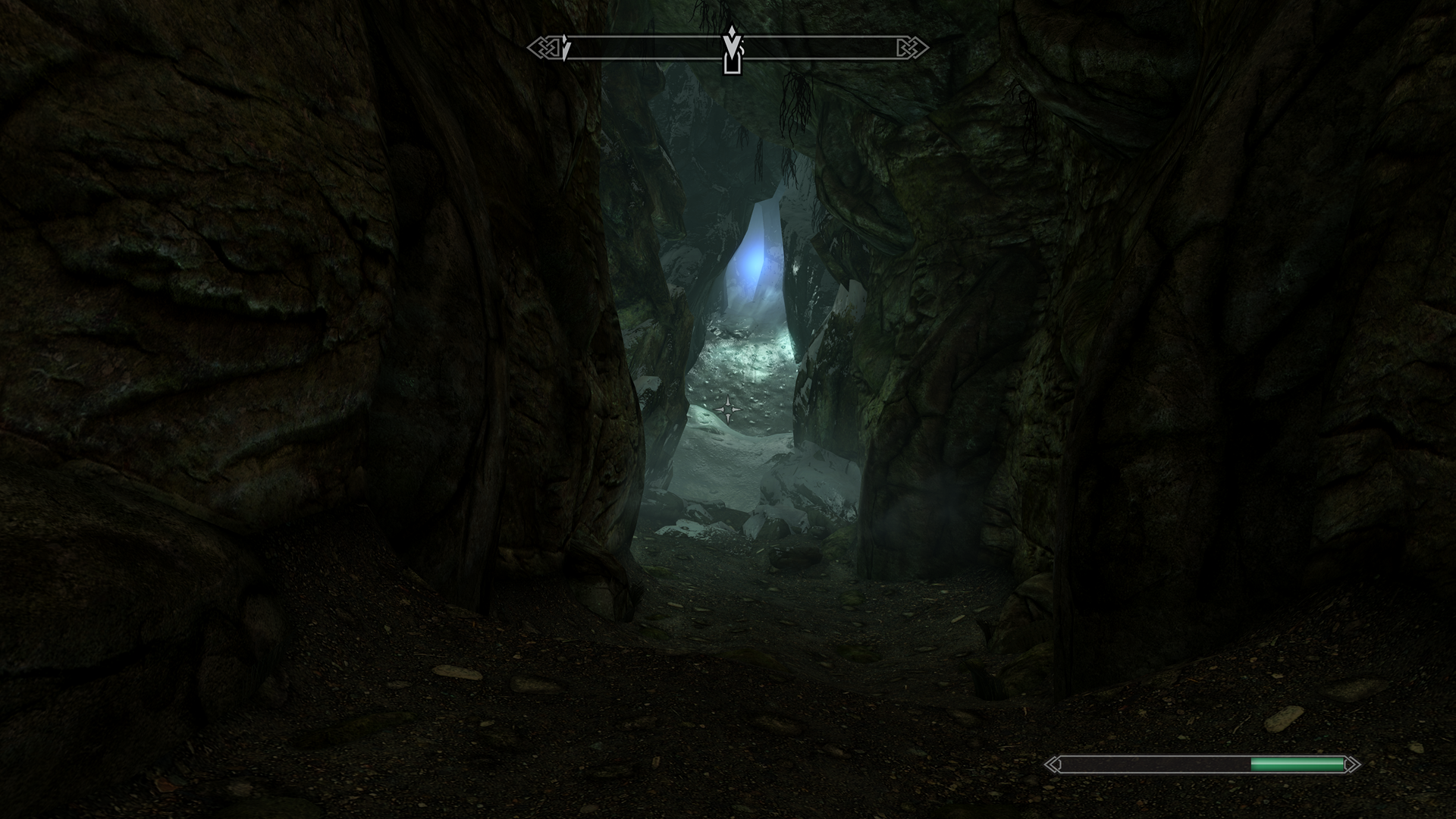 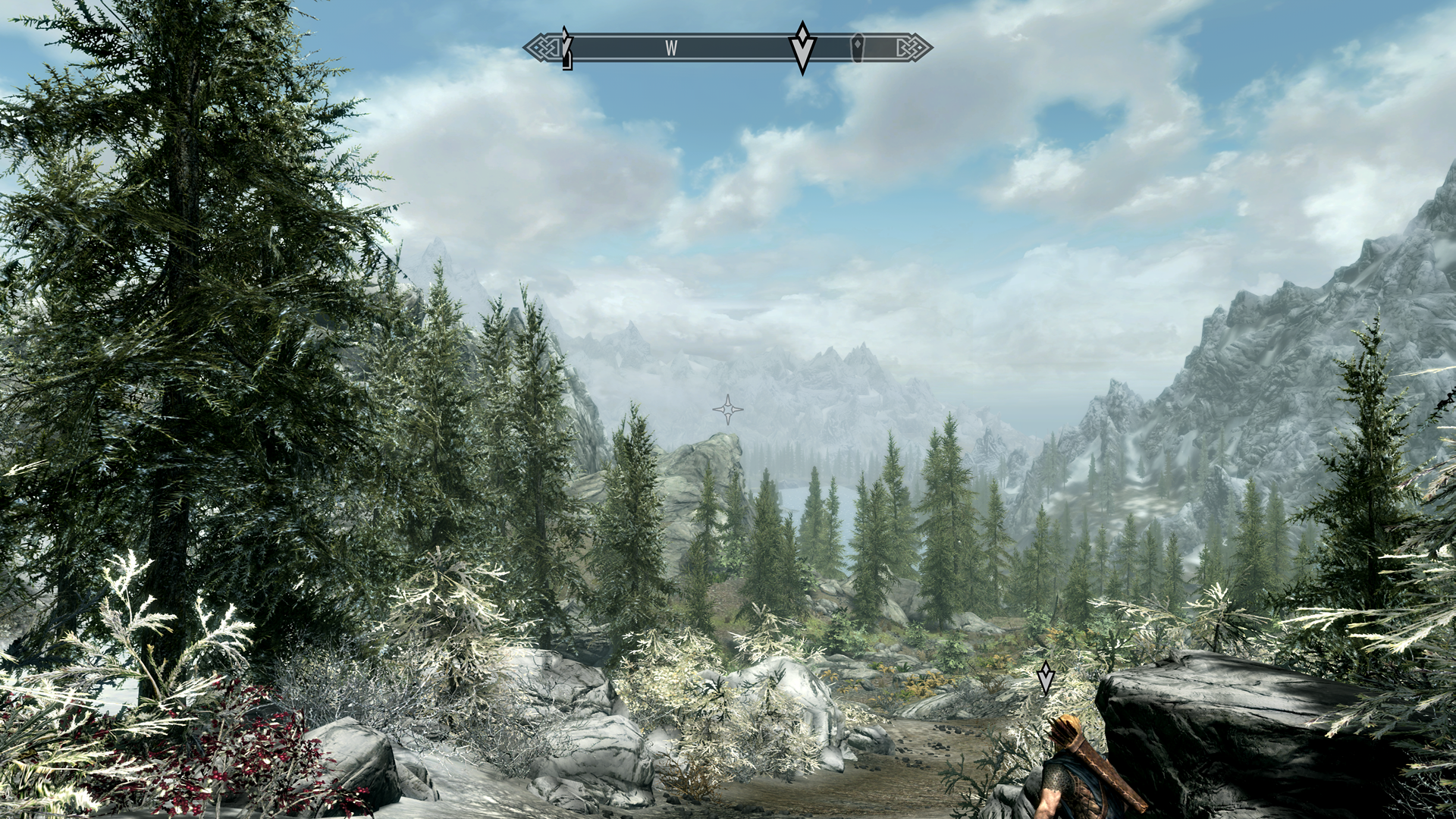 So, I'll get some more screenshots while out and about in the world. Modded intro had entirely too much fog for good outdoors screenshots and I wasn't entirely sure how to change the weather. It's somewhere in the mods.

This is the best comparison of the lot:

Modded in the second shot looks SO much better than vanilla does in-game.

So which mods do I need to install on my series x? I have never tried to mod a game on the console

Thank you for posting the pics. You know your way around the mod scene.

I could clear up a lot of space if I didn’t use the graphic mod add-ons. Hmm.

So which mods do I need to install on my series x? I have never tried to mod a game on the console

So, if you want to go down this rabbit hole expect it to take a while. Though the person in the link did most of the hard work for you.

In that thread there's a spreadsheet and in the spreadsheet is the order to out the mods in. Start at the top and work your way down. The best way to go about this is to click the links to Bethesda's site and add the mod to your favorites. (You need to link your Bethesda account and Xbox account for them to show up in-game on your Xbox.)

Once you've favorited all of them they'll show up all jumbled mess in the game's Mod section. It's really annoying that the order of your faves shows up randomly in-game, but it is what it is.

Mod load order is super important because it's the way the game loads things. That's why you'll always see folks putting the Unofficial Skyrim Patch first because it's a bug fixing mod. You'll also see that Mod A will have a Mod A Patch/Fix sometimes and the fix/patch mod will have to go second.

Again, it doesn't matter how you favorite the mods on the Bethesda site as they'll show up randomly in your favorite list in-game. The order you download the mods in-game is the order they will show up in the mod load order screen.

People spend hours upon hours tweaking mod load orders to make sure there aren't crashes. So far so good for me on this load order.

Let me know if any of that is confusing.

Thank you for posting the pics. You know your way around the mod scene.

I could clear up a lot of space if I didn’t use the graphic mod add-ons. Hmm.

Not me! Someone else did all the hard work. I've modded the heck out of Skyrim on PC, but never bothered on console due to the restrictions. I'm doing it now because my XSX's more powerful than my pc. Skyrim on Gamepass is cheaper than trying to find a new videocard!

FYI: I'm getting errors from the Bethesda website
Can't add anything. I'm guessing there's a server-side error going on.

I've been running vanilla Skyrim on my ps5 with the free update and holy cow does it look good at 60 FPS and loading times are nonexistent. It's going to be a good winter.

So I'm a few hours into a dual-wielding run and it's a good way to be a melee glass cannon. High damage but not a lot of health or protection.

Still, it's fun to charge in to wreck stuff with the double power attack, not even worrying about sneaking or range.

EDIT: I was enjoying using the "Elemental Fury" Shout with my dual wielding: it increases attack speed, and therefore DPS. I'd not used it with other builds. It recharges quickly, so is quite handy.

But then I went and enchanted my weapons, only to find Elemental Fury doesn't work with enchanted weapons! Now I need to math to find out whether it's more effective to do extra fire damage or have extra attack speed. Or just go back to staggering goons with trusty ol' Unstoppable force

I tried looking every where online so I'm sure the answer is no, but I have to ask here before I give up. Can you pay any blacksmith to level up my gear or do I have to do it all myself?

Island of the Gods

You have to do it yourself. But if you are on PC then I'm sure Nexus mod site has a mod for that

LOL Me to Shirley, me too.

Winter has come to Australia, and with it, I have once again spent a day downloading and installing mods. Maybe this time I will play my chosen modlist for longer than I spent downloading and tweaking it

I wish you luck with that.

Which modlist are you thinking of going with?

I did recently discovered Nolvus that I may look into for my next run. While it doesn't have a Wabbajack modlist, they do provide an auto installer for Nolvus modlists, which suggests there are different flavours.

I wanted to take a crack at Wildlander but can't get it up and running right so it looks like I'll be doing Living Skyrim 3.

Nice. Excellent choice. LS3 has been my go-to Wabbajack list. Especially now that they have essentially stopped updating and iterating LS3, to focus on starting LS4. One of the biggest issues with in-progress modlists is that they often 'require' a new save to avoid potentially game-breaking bugs.

Maybe I'll just stick with that instead of looking at Nolvus and as you suggest, actually play it!

Lol, well, after another half a day of prep work including registry editing and a full uninstall and reinstall I finally got Wildlander ready to play

I've never done a Requiem game before but I really like the idea of a mage build with the spell research mod making it an actual learning experience.

I look forward to hearing of your adventures!

I never fully got on with the spell learning difficulty, when it boiled down to entirely RNG. At least you can tweak the % chance to learn in the mod options.

Island of the Gods

Novlus does look very interesting. I tried out the new Nexus Collections system, very easy to use. But at the end of the day I want the mods that I want and don't want the ones that I don't so once again I spent a week slowly crafting my own mod list.

But I will definitely use the collections system for Fallout 4 and other games. Somehow I have a lot of patience for modding Skyrim but for other games I just want it to be quick and painless.

I played a good chunk of Magnum Opus FO 4 wabbajack list, and it was a good time.

I no longer have the patience to build a custom mod list for either, however

So I dove into Enderal yesterday and wow, it might be the best TC I've seen for Skyrim. It looks amazing, has its own flair for things, and has a really engaging story along with very competent voice acting.

It does also have an opening sequence that i really want expecting!

But yes, it's amazing what a mod-group can achieve, it's not surprising they ended up heading towards their own game.

I never quite have Nehrim for be Oblivion a fair crack, just didn't quite get over the lack of English voice acting. Shallow, I know.

Yeah that opening is really something. Very engaging!

So wait is that Oblivion mod a prequel to this one?

Edit: OMG it is. It seems to be German audio with English subtitles according to Steam.

Yep. And equally award-winning, apparently. Oblivion is actually my least favourite Elder Scrolls, which perhaps plays into my reluctance to try Nehrim.

I wish you luck though, hope you enjoy it.

Oblivion is my least favorite as well, but I'm willing to give this a go. If it crashes as much as people say I'll be sad.

There was a PC mod...long, long ago, that may still be out there. It's a covered wagon sold near Markarth, and it's basically a house on wheels so that you never need to fast travel (has storage, all of the smithing/enchanting/alchemy stuff...I think). Was always tempted to try it that way.

Not sure how you find anything like this on Xbox...

Yeah Roo, I ran that mod for a while on PC, it was cool, but pretty buggy.

Anyone get Enderal running on Steam Deck? I’ve tried but no luck.