And no, you aren't hyper-wealthy.

People don’t deserve to profit from their labor, because profit is the theft of someone else’s labor.

People are entitled to the value of their own labor. Nothing less. Nothing more.

I had typed a long spiel about the development of tax principles internationally over the last few centuries only seeking to tax realised gains (profits once assets are sold) outside of certain scenarios but that draft post was lost once I closed my phone browser.

But basically, the issue is this:

- Assets such as stocks (which is where billionaires' wealth is concentrated) is subject to market price volatility so one day they might be up tens of billions and the next down the same or more.

- However, at the same time, these billionaires charge their assets to banks to borrow money - and that money can be used on lifestyle, and if they deploy that money to acquire more assets, they may get tax deductions for their borrowing costs too. In other words, they get to enjoy the fruits of their wealth by firstly paying no concurrent tax on the underlying wealth and also minimising their tax through the borrowing costs.

- Even if you tax stocks, they may get taxed at preferential/discounted capital gains tax rates such that they never bear the same tax burden as the average citizen on their wage or salary. That's Buffet's point about being prepared to pay more tax on his wealth.

You could theoretically adopt the Chinese model - make comments about common prosperity and have large companies and billionaires suddenly commit to billions in philanthrophy.

Or, you could be more systematic, and perhaps tie it to what they do in regards to either consumption/lifestyle taxation or if they shift it into some NFP foundation trigger a taxing point there so the wealth doesn't escape the public benefit. However, I can tell you now that the richer you are the greater propensity to engage tax specialists to mitigate the liability.

In short - I don't have an answer, but equally, I do question more and more the social utility of allowing enormous wealth to be accreted by externalisation of social costs (whether it be pollution or social welfare because labour is not compensated fairly for its contribution to that wealth accretion). And if the answer is that we need not focus on so much profit at the expense of environmental capital, then we really should revisit the capitalism model before we pillage future environmental capital.

Isn't this what the Romans also did? I have no citation.

More aggressive estate taxes with less loop holes would be good. Strangely evil socialist Canada doesn't even have one (we should). Thing is that actually takes people dying which might not be quick enough for some people.

I'm not even sure if rich people persay are the problem. The largest companies with absurd cash holdings don't exactly help the economy by soaking up money and doing nothing with it.

One big fix to start at is major corporate regulations. Regulate if you are a publicly traded company that means you can only put money towards shareholders after meeting the regulatory thresholds of pay for workers, benefits, etc. This would reduce a lot of share money being inflated from workers dollars never realized. Regulate what executives compensation can be. There will always be rich & greedy folks just like there will be folks who abuse benefits. But they are the in the tails of tails of tails of the distribution. We can flatten the curve of the ultrarich.

Next you regulate all the work force and encourage it by lowering tax burden the more you take care of your people. The rules we all have to play by currently are only there because John Billionaire found a loophole and exploited it until the cows came home from another galaxy. We need IRS & laws that are able to be somewhat pliable that would address ethics. Did you know you were abusing a system loophole? Then you need to report it and work with us to find ways to close it.

I have no hope for the USA, we are ruined. We need a peoples global leader and I don't know where that will come from with how Russia & China are attempting to destabilize the world in so many ways unchecked. Basically find a good place to live and watch the world burn. Sorry I've just not felt hope lately.

It's going to take very basic very unsupported by money laws. It would take a socialist revolution in the USA and unfortunately that won't happen. The only supported revolution is the next Jan 6th.

Center for Media and Democracy wrote:

The Charles Koch Foundation and Charles Koch Institute paid out $149.2 million in grants in 2020 to universities, right-wing policy, litigation, and advocacy groups, and other causes, the latest IRS filings obtained by the Center for Media and Democracy (CMD) detail.

Charles Koch, the CEO of Koch Industries that Forbes reports is worth $52.8 billion, transferred $26.7 million from one of his trusts to his personal foundation, according to the Charles Koch Foundation filing. The contribution section on the Charles Koch Institute filing is empty as 501(c)3 registered tax-exempt organizations are not required to disclose donor names or amounts.

Koch Contributions to Universities and Colleges Tops $89 Million
The Charles Koch Foundation and Charles Koch Institute gave $89.7 million to academic centers, colleges, and universities in the United States and abroad, CMD calculated. The total is less than the over $100 million Koch doled out for higher education in 2019.

Koch, and his allies argued that the rule infringed on their First Amendment rights and opened donors up to harassment that deters their giving, despite the fact that the information was kept confidential from the public.

CMD analyzed the available IRS tax filings between 2015 and 2019 of 11 prominent right-wing funders and Koch contributions to the Republican Attorneys General Association (RAGA) and found that those funders gave nearly $222 million to 69 organizations that filed amici supporting Americans for Prosperity Foundation.

The 2020 IRS filings from the Charles Koch Foundation and Charles Koch Institute detail another $11.9 million in contributions to 22 nonprofits that filed supporting briefs in the case, bringing the total to close to a quarter of a billion dollars.

American Juris Link, which its president Carrie Ann Donnell describes as "basically like the SPN [State Policy Network] for litigators," is tied to the Federalist Society, RAGA, SPN, and Ballotpedia.

The Pacific Legal Foundation, New Civil Liberties Alliance, and the Federalist Society all received at least a million dollars from the Koch funding vehicles. The Federalist Society, and the co-chair of its board Leonard Leo, are responsible for packing the federal court system with right-wing judges, including five U.S. Supreme Court justices with ties to the group.

Koch is the largest known donor to the New Civil Liberties Alliance, and the litigation outfit has defended his interests and employed former Koch network operatives in return.

The Charles Koch Institute also gave $275,000 to the anti-LGBTQ, Christian litigation powerhouse Alliance Defending Freedom, a first for Koch, according to CMD's tracking of his funding. Designated by the Southern Poverty Law Center as a hate group, Alliance Defending Freedom is a major pusher of so-called “campus free speech” legislation and in recent years has been an active litigant in cases seeking to upend LGBTQ rights in the name of "religious freedom."

I'm in marketing and PR and I'm still continually amazed at the amount of influence the insanely wealthy can purchase for what honestly amounts to the change they find in their couch. Want to buy a SCOTUS decision? Just talk to your buds and together pony up a quarter of a billion dollars to make it seem like there's widespread support for concealing the ID of donors.

Bezos's and Musk's dick measuring contest put out more carbon than a billion poor people will over their entire lifetime. 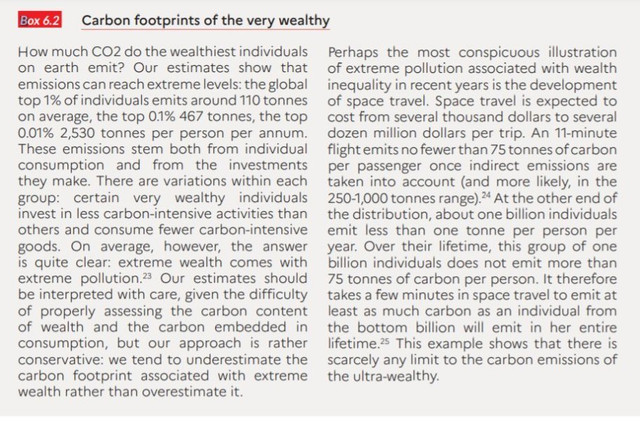 I am wondering who wants to join me in haunting Elon this Christmas Eve? I tried reaching out to the Muppets but something tells me Disney doesn't rent them out for change the mind & heart of the rich parties.

Some days I think I'm not as angry at the billionaires for being world eating monsters, as I am at the entire civilization that doesn't through one means or another end their existence as a class. Then I settle into thoughts of "We as a species are getting what we deserve for not stopping this"

We've got a template on how to do it. We did the same thing to kings and political power.

And we could do it again.

Just need the economic equivalent of the Magna Carta on through Hobbes and Thomas Paine on up to and past the Bill of Rights.

It's why I'm supporting socialists wherever I can because someone has to make the moral argument that no one should have that much economic power. Anywhere.

We've got a template on how to do it. We did the same thing to kings and political power.

And we could do it again.

Just need the economic equivalent of the Magna Carta on through Hobbes and Thomas Paine on up to and past the Bill of Rights.

It's why I'm supporting socialists wherever I can because someone has to make the moral argument that no one should have that much economic power. Anywhere.

Yes. IMHO The argument for voting "blue no matter who" gets thinner and thinner the more time goes by. If the Democants cannot (or won't, or has an agreement not to) stop what the Repubnicans are doing then that rationale goes straight out the window.

I would posit that the above rationale is exactly the reason why we are in this mess in the first place. If people spent as much time and effort building something new vs. throwing away their vote on geriocrats who do little to represent the people who elect them. Just a thought.

Timeless. Who knew that ABC would predict President Trump?

It should be noted that he did this right before Amazon announced massive layoffs. It was very clearly a distraction.

Hobear
Posted: November 15, 1:12 AM
Smarter than the average Bear….Ho

No, he means the girl is named Charity.

A Charity in every port!

It should be noted that he did this right before Amazon announced massive layoffs. It was very clearly a distraction.

Lots of AMZN ads on sports here in the US right now touting, "Amazon gives employee education worth money" and testimonials from guys on the warehouse floor who appear to be doing maintenance on machines talking about how, "My salary has gone up...3 or 4 times..."

Every time I see one of these ads I immediately think of the AMZN layoffs and the union efforts these ads are trying to undermine.