Question: how long does it take you to color one of your drawings?

Depends, but colouring itself is usually a relatively quick part of the process for me, partly because I do shading in greyscale and use layer blending to have the shadows 'soak through' the colour layer above. I also break the image down across layers (hair, clothes, ornaments, body, etc.) when drawing it so that I can often just flood fill different parts a single base colour, and then do the detail work afterwards.

If I decide to do highlights, then that is also done in a separate layer, usually with a blend mode that allows me to use the same colour I used for the base and relying on the interaction between layers to create a lighter tone. Some times I paint over blocks of colour with a more blotchy brush in an 'off-tone' to create texture. I also often use another 'undercoat' of flood-filled colour for pale areas (in an entirely different blend mode) where the shadows often come through too grey—if you look at some of my images (not the last one), you'll see that the linework around the skin is a dark red rather than black, which gives away the presence of the undercoat.

This approach makes it easier to keep a limited consistent colour palette and colour things in fast, but it does have limitations, especially for really dark areas of shadow (see the Lady Loki picture, and the shadows under the hood—it doesn't really work right), or for more interesting colour interactions where the shadows might look better with a different tint (rather than programmatically derived from the blending).

In practice, most of my time is still used up just drawing the image, and sometimes the shading if I'm going for accuracy rather than blotting out general areas (which is what I'll probably be doing for the rest of this month!).

(Well that was a bigger reply than I meant to make.)

Very interesting! Thanks for the detailed response!

Next prompt is 'Kate Bishop', who I believe could be considered Hawk-Eye the Second?* I was experimenting with a different (faster) style of shading, which is why the style in general is a bit different.

* I'm a bit behind on Marvel movies/TV. I remember seeing Age of Ultron a few years back. Have they released any more films since then?

You are way behind. There are quite a few Marvel movies and TV shows that are incredible since Age of Ultron. Some of the best stuff awaits you TBH.

Good-looking Kate Bishop, Ravanon! I know her from Young Avengers first and West Coast Avengers second, but I'm not super familiar with the character. Her dynamic with Clint in the Hawkeye trailer for the new Disney Plus show looks like it could be lots of fun, we'll see...

Regarding Marvel movies, I've seen most of them, but not all. One I haven't seen is... Age of Ultron. But moving on to my drawing...

On his sixth trial, the Battle Shrimp bested the Genshan Gladiators. 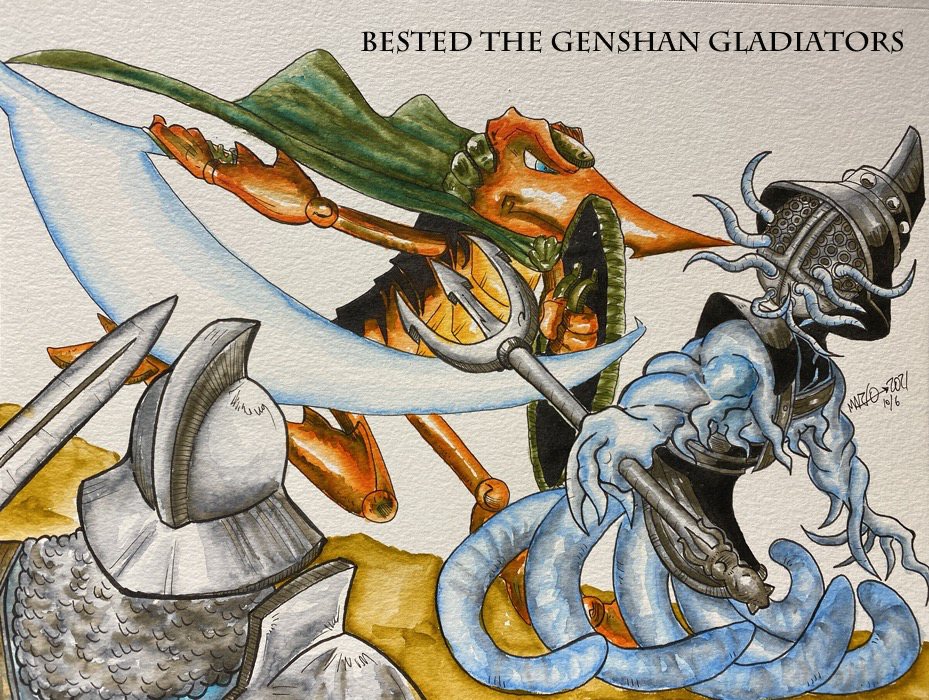 On his seventh trial, the Battle Shrimp rescued the Nautilus of Necrothia. 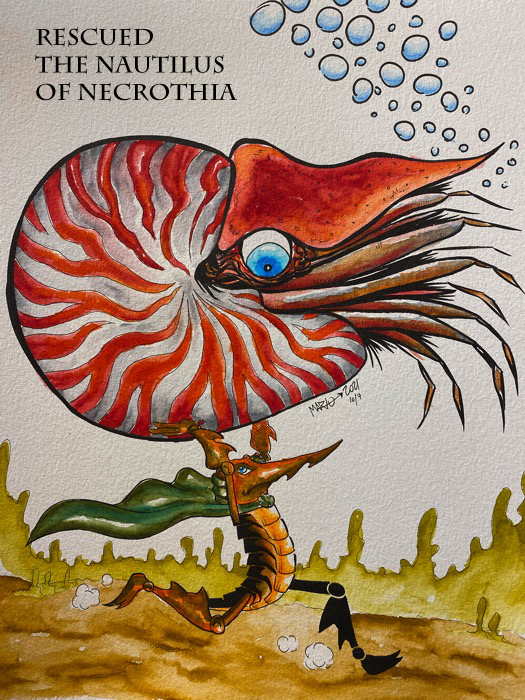 Oof, I had something on tonight that delayed me finishing this, but I'm done now. 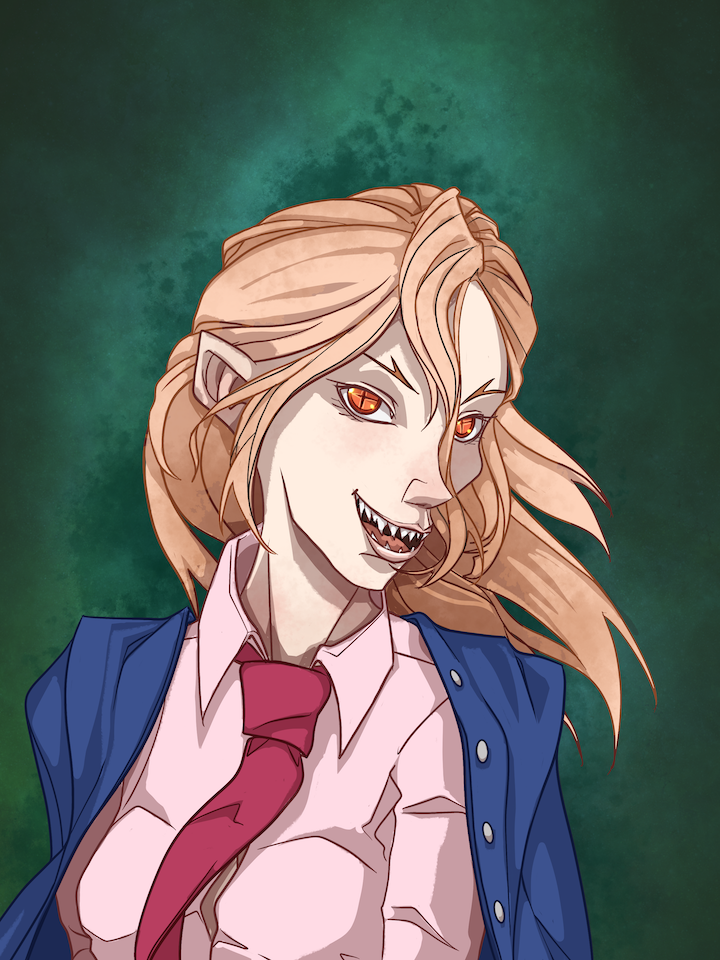 Another character from another manga I don't know! Ah well, still interesting to try and draw.

I haven't read it/watched it either, but at least I've heard of it, which is an improvement.

My Friday schedule's more flexible, so I was able to get on with today's drawing prompt quite, er, promptly. 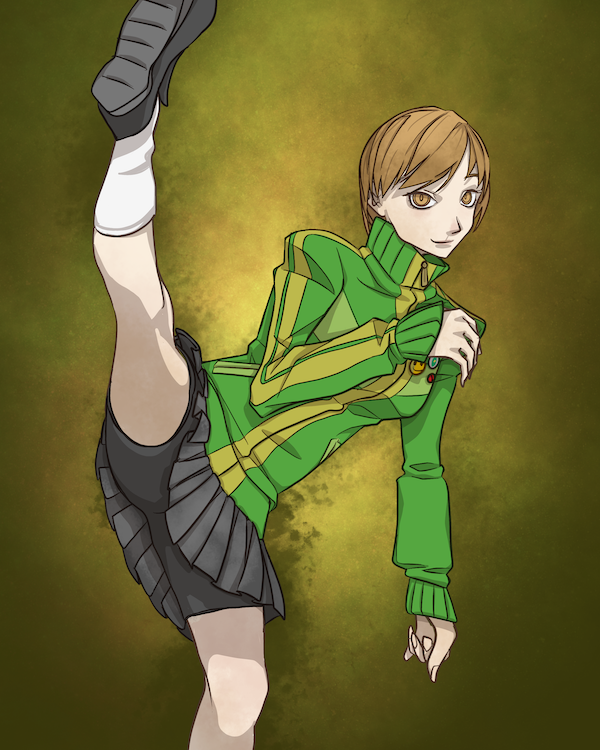 I've actually played the first Persona game! And I've thought about playing some of the other ones for years now... but have never gotten around to doing so. With Persona 4 available on PC now, I've fewer excuses, except for the usual one of having too many damn games to play. If I could just finish off the last DLC for Witcher 3...

Also, Ravanon, I was thinking, given the way you color and your love of fantasy you should check out the comic book Isola if you haven't already. It is one of my favorite series, and the artwork is to die for. I wish I could color like Msassyk!

I don't read a lot of comic books (though I do read webcomics and dip into manga now and then), but I'll keep this in mind, thanks!

The only Persona I know is Persona 5 Royal, which I played earlier this year. Also, now that I think about it, I've read the first volume of the Persona 4 manga, but that's about it. I need to go back to that series!

On his eighth trial, the Battle Shrimp rode the Stingray of Strassa: 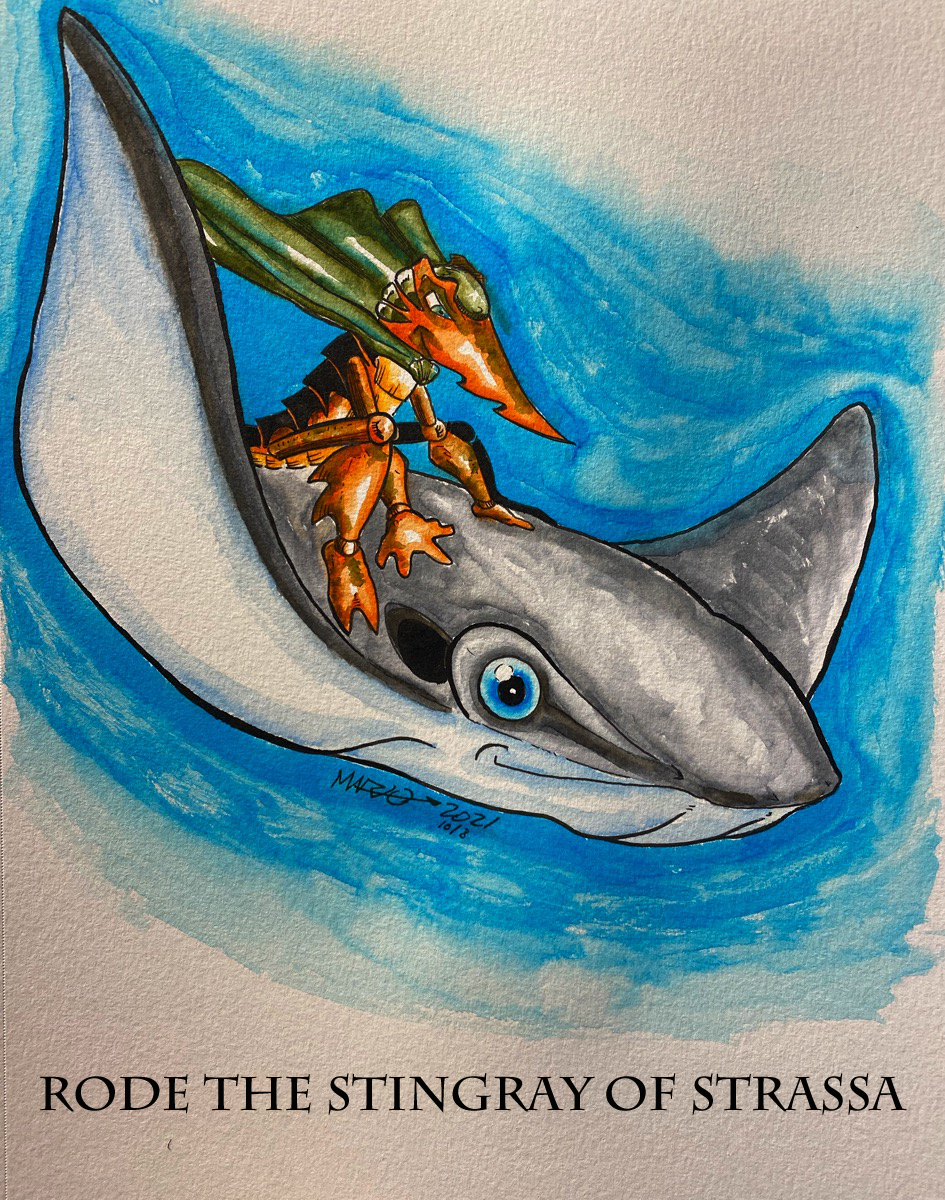 Hopefully, I'll be able to get back to some more detailed work over the coming days, seeing as my fall break starts today.

On his ninth trial, the Battle Shrimp withstood the barnacle tide of Balteras: 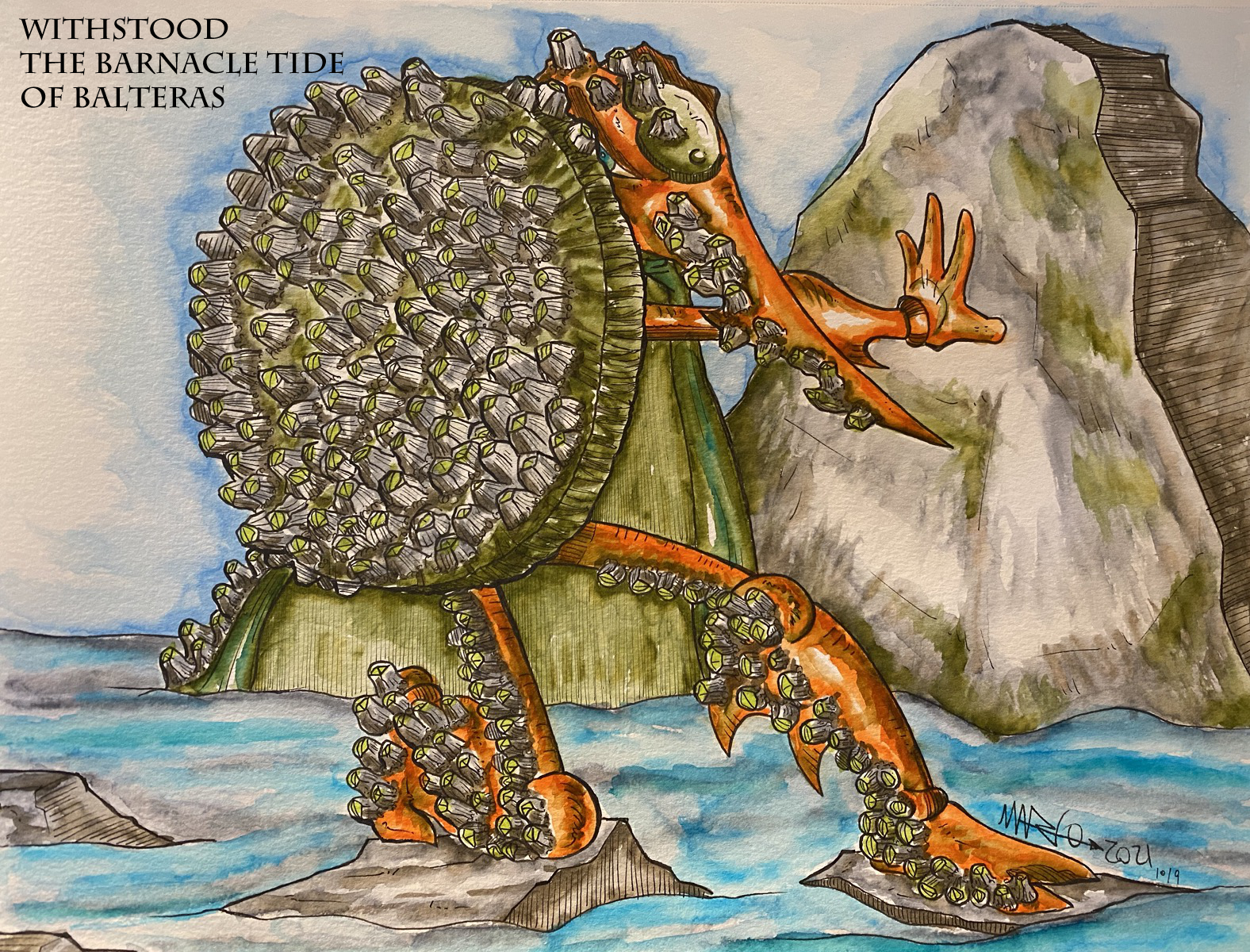 On my side, the next prompt is Cindy Moon from 'Silk': 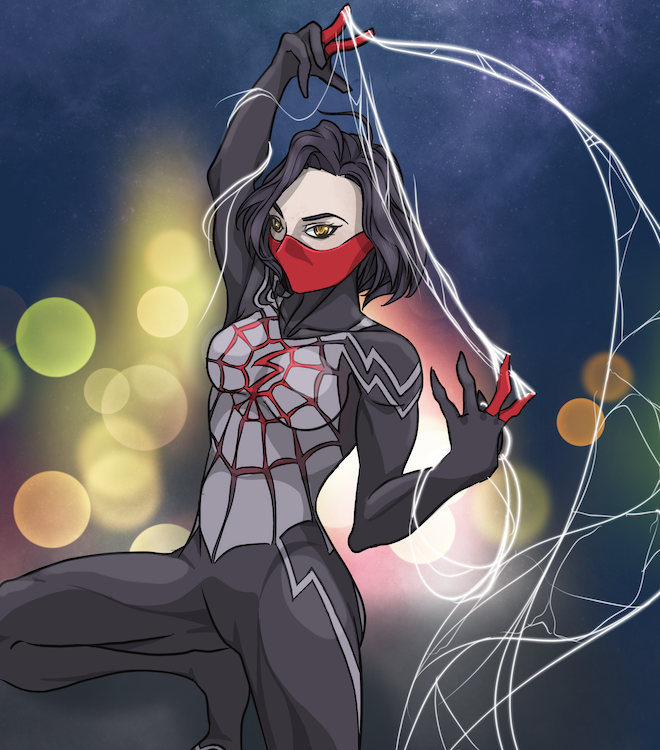 Apparently, an alternative spiderwoman? I am so up to date with pop culture.

Silk looks awesome! I've never read anything with her in it, but I've seen the character in various covers here and there. She's someone from the Spider-verse... and that's really all I know.

Yeah. I didn't know a thing about Cindy Moon until I saw the prompt. She is really, really cool!

A relatively simple one today. Senku from the manga/anime "Dr. Stone": 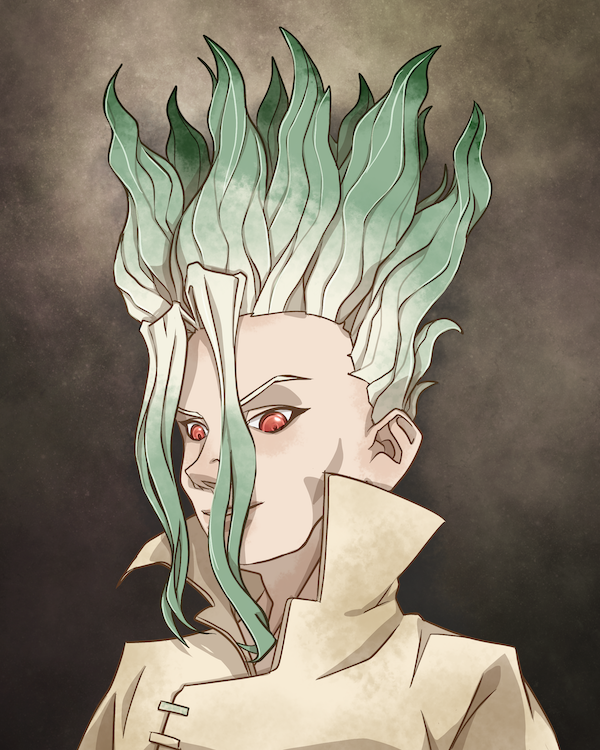 I have heard of this one, but haven't read/watched any of it. Any good, anyone?

(Also, very strange hair. My version looks like fronds from a fern...)

I haven't read it, but one of the hosts of the 11 O'Clock Comics podcast brings it up regularly and unfailingly sings its praises. And the hair looks great!

As for my drawing...

On his tenth trial, the Battle Shrimp resisted the song of the Sirens of Serenee. 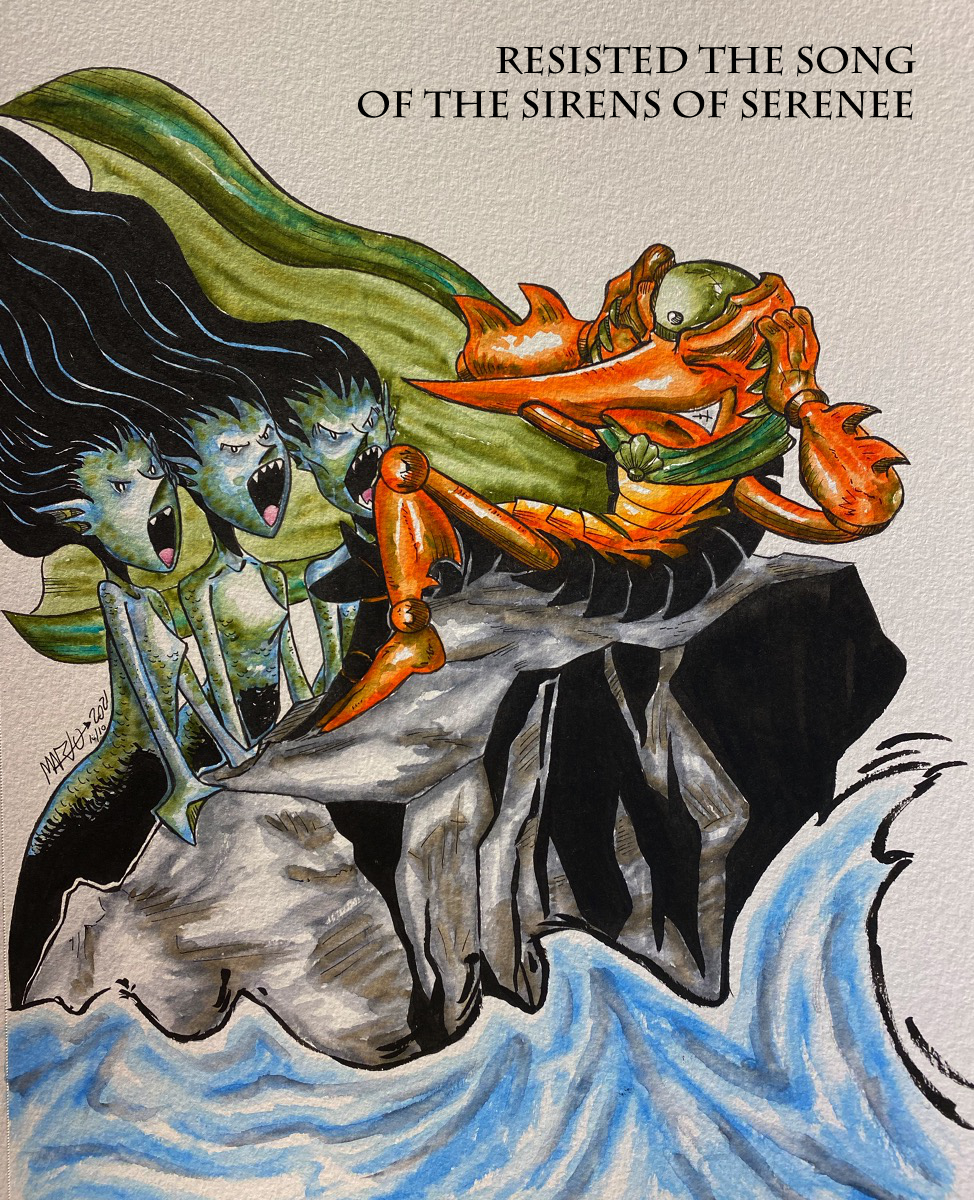 Some scaly creatures here, but nothing too crazy. Let's learn from our past mistakes! 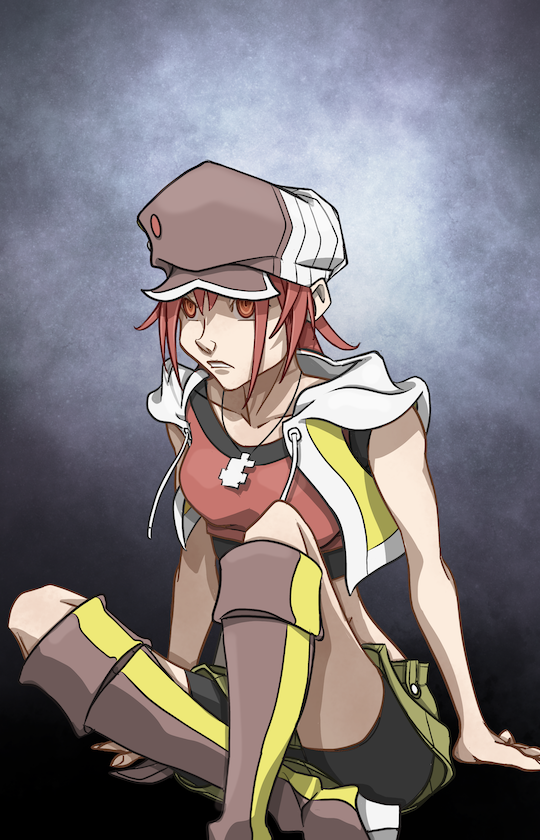 Awesome! One of my favorites so far.

I haven't played the game either, but I also considered getting it... at least the new version for PS4 that came out recently or is about to come out. Anyway...

On his eleventh trial, the Battle Shrimp won the race of Regia Ridge: 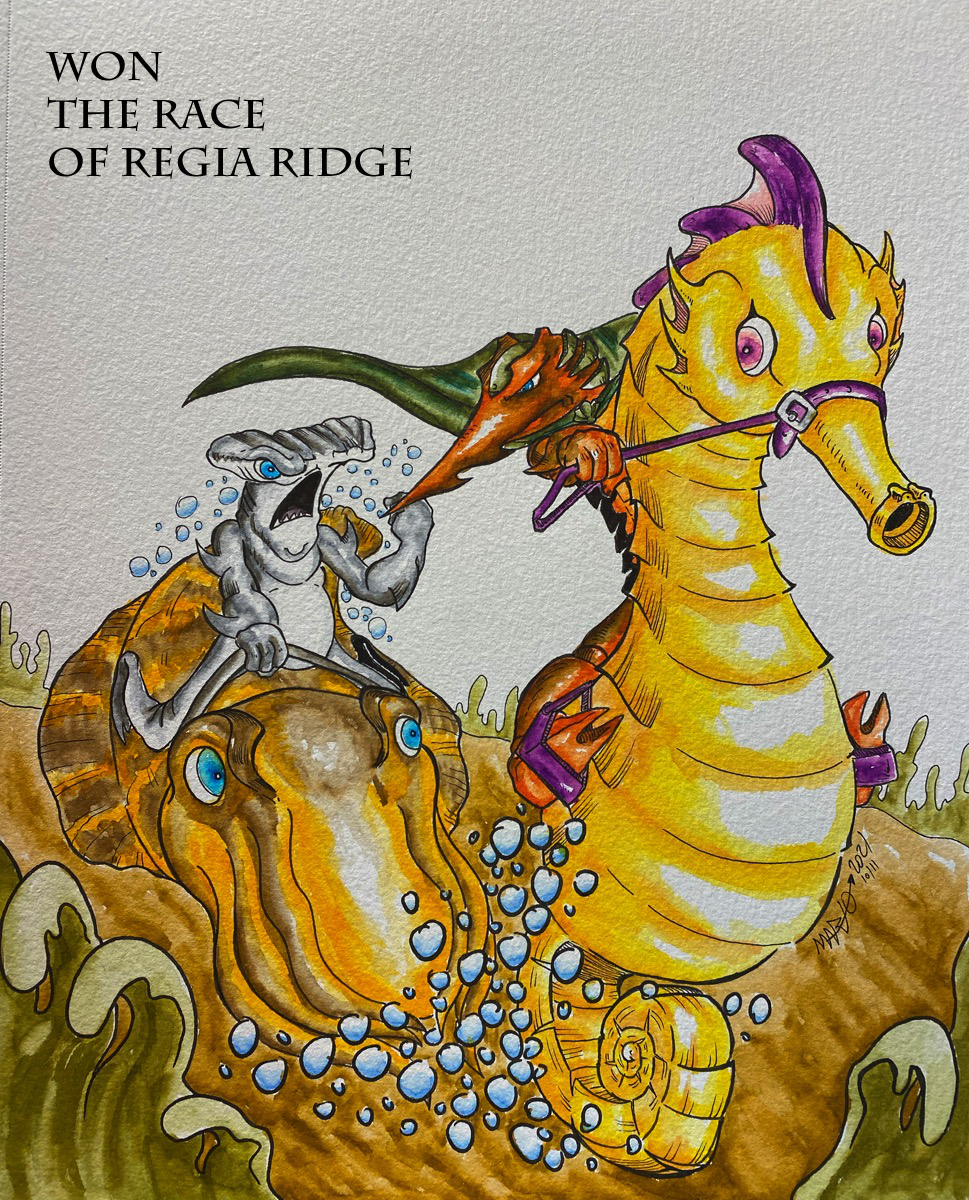 On his twelfth trial, the Battle Shrimp faced the Kraken of Krassos. 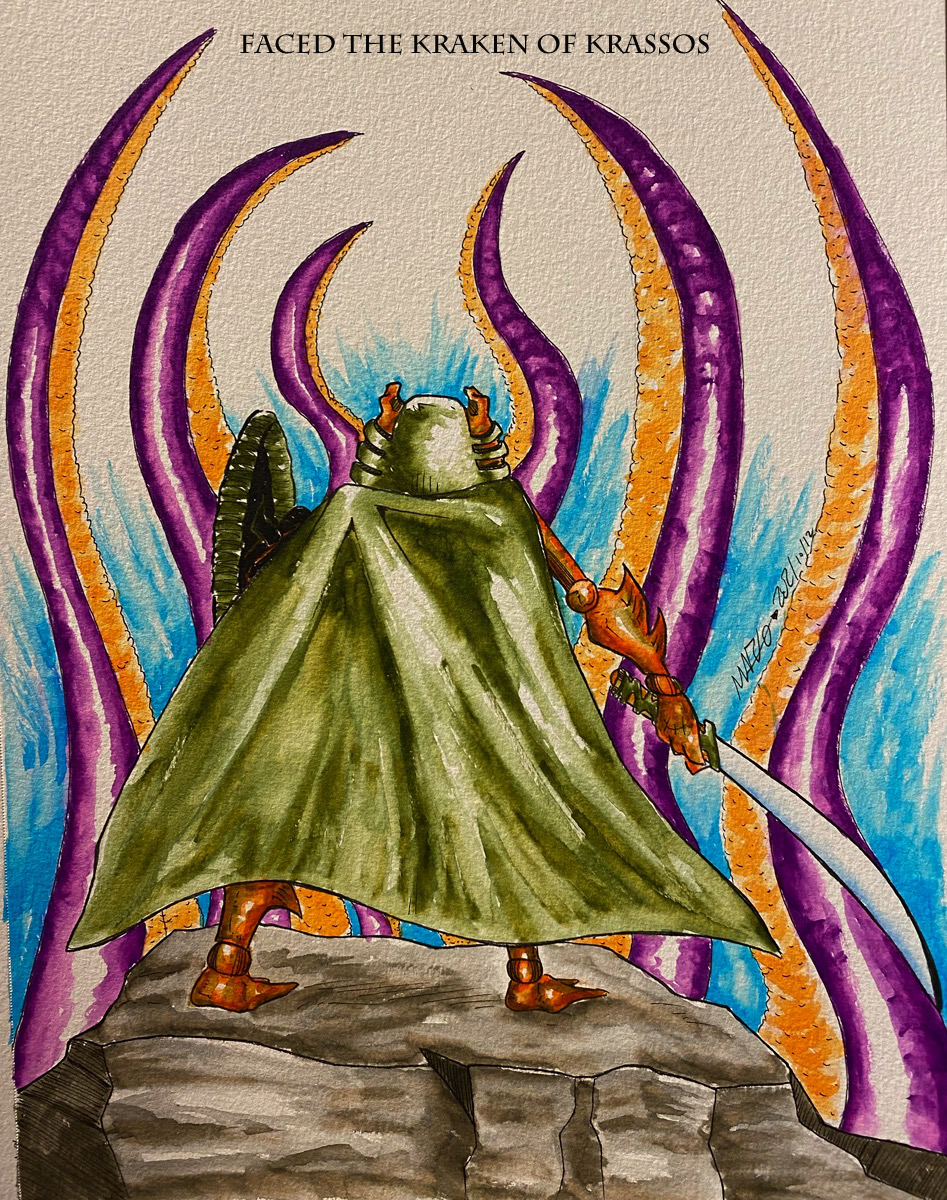 I had to keep it simple today because I have to work on the drawing for my wife's birthday. October is always such a busy month!

My next is Yelena Belova from "Black Widow": 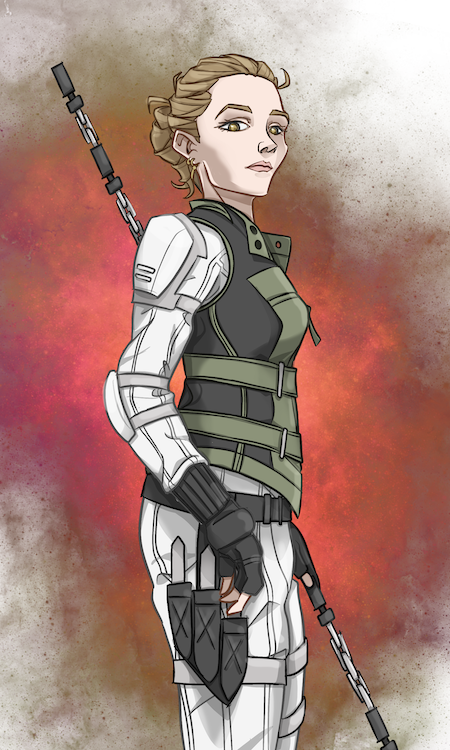 As I understand it, Yelena is a Black Widow from "Black Widow", but not the Black Widow. So that clears that up.

I know exactly who she is because I just finished watching Black Widow not even five minutes ago! Fun movie, by the way.

Yeah. Almost. I feel your pain, my friend.

Next prompt is Mikasa from "Attack on Titan" (specifically Season 4 apparently, according to the prompt list): 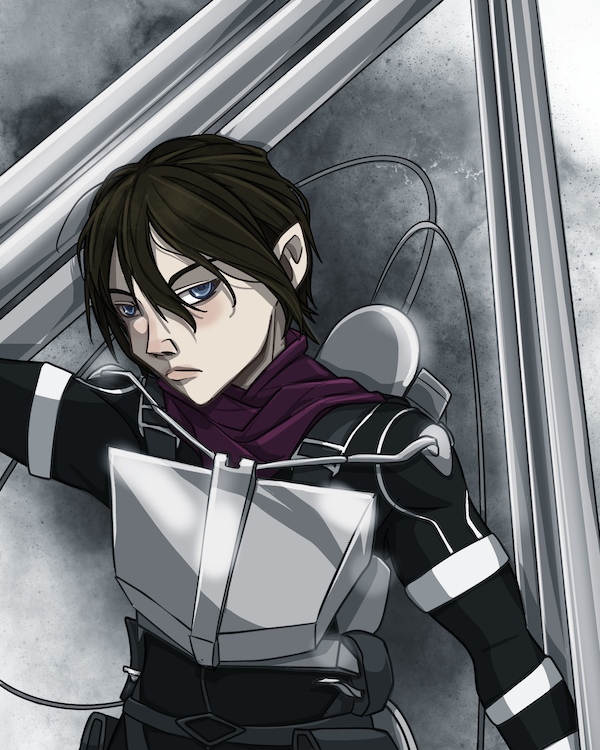 I found this a bit tricky; wasn't sure how it would come out. Too many fiddly bits in the costume where I wasn't sure what they were supposed to represent on the reference images I pulled down.

Hey, I haven't seen/read Attack of Titan either! Though I'm at least somewhat familiar with what it's about. I think. I even played the deck builder game (whatever it's actually called) a few times. I don't recall ever winning. (Actually, now that I think about it, it was cooperative so... I'm still not sure whether we ever won or not.)

"Attack on Titan" is pro fascist so you won't be losing anything by missing it.
I watched the first season and then some of the second and stopped watching it for that reason.

Very cool! I've only seen video reviews of one of the Attack on Titan games, so I don't really know much about it. Sounds like I'm not missing much...

On his thirteenth trial, the Battle Shrimp defeated the Gang of the Gill: 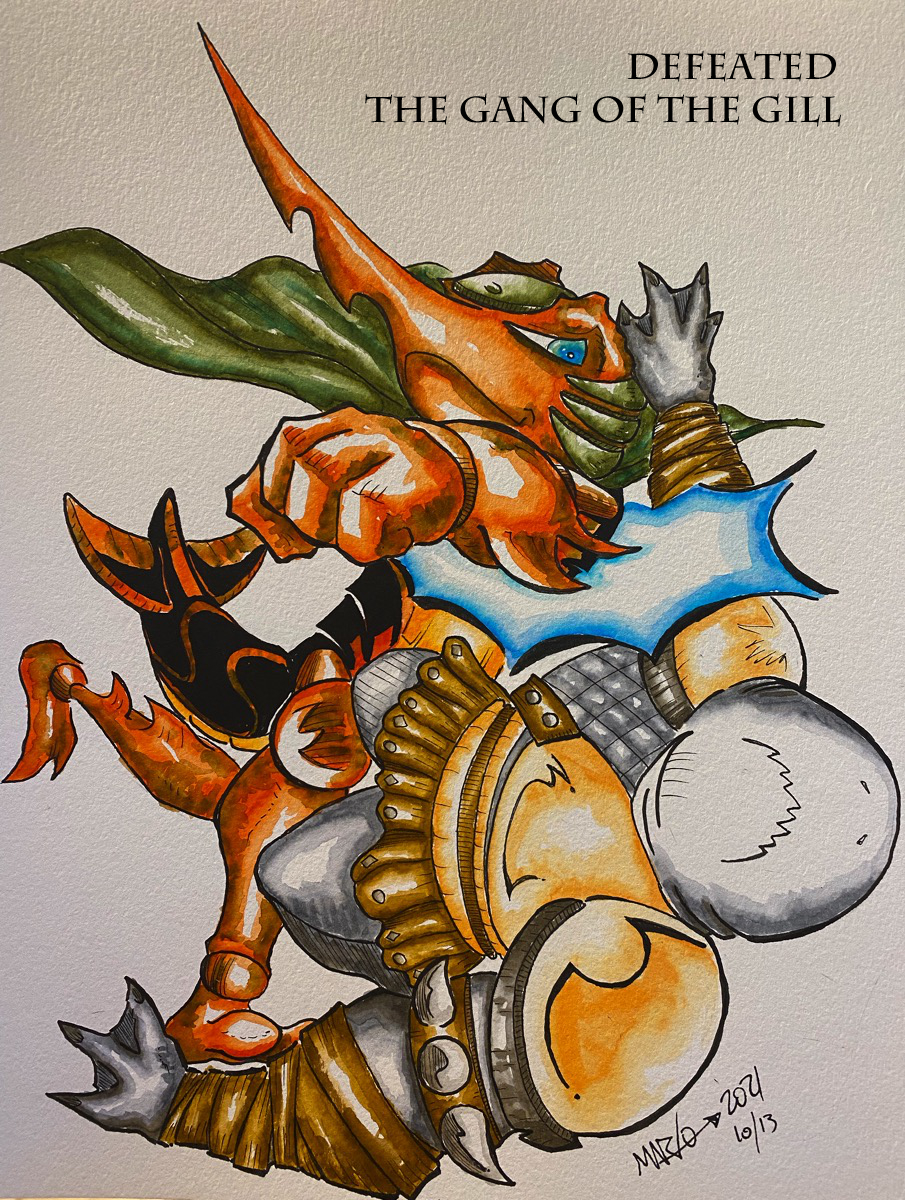 Yeah, I'm inclined to agree about the eyes. The daily challenges don't leave much time for adjustments, but l could probably do a better job quite quickly if I was to go back and tweak the drawing. (In fact, looking back at it now, it looks like l forgot to finish the eyes properly at all. Not the first time I've rushed the ending when finishing up for the evening.)

On his fourteenth trial, the Battle Shrimp stopped the Charge of the Clawthaginians: 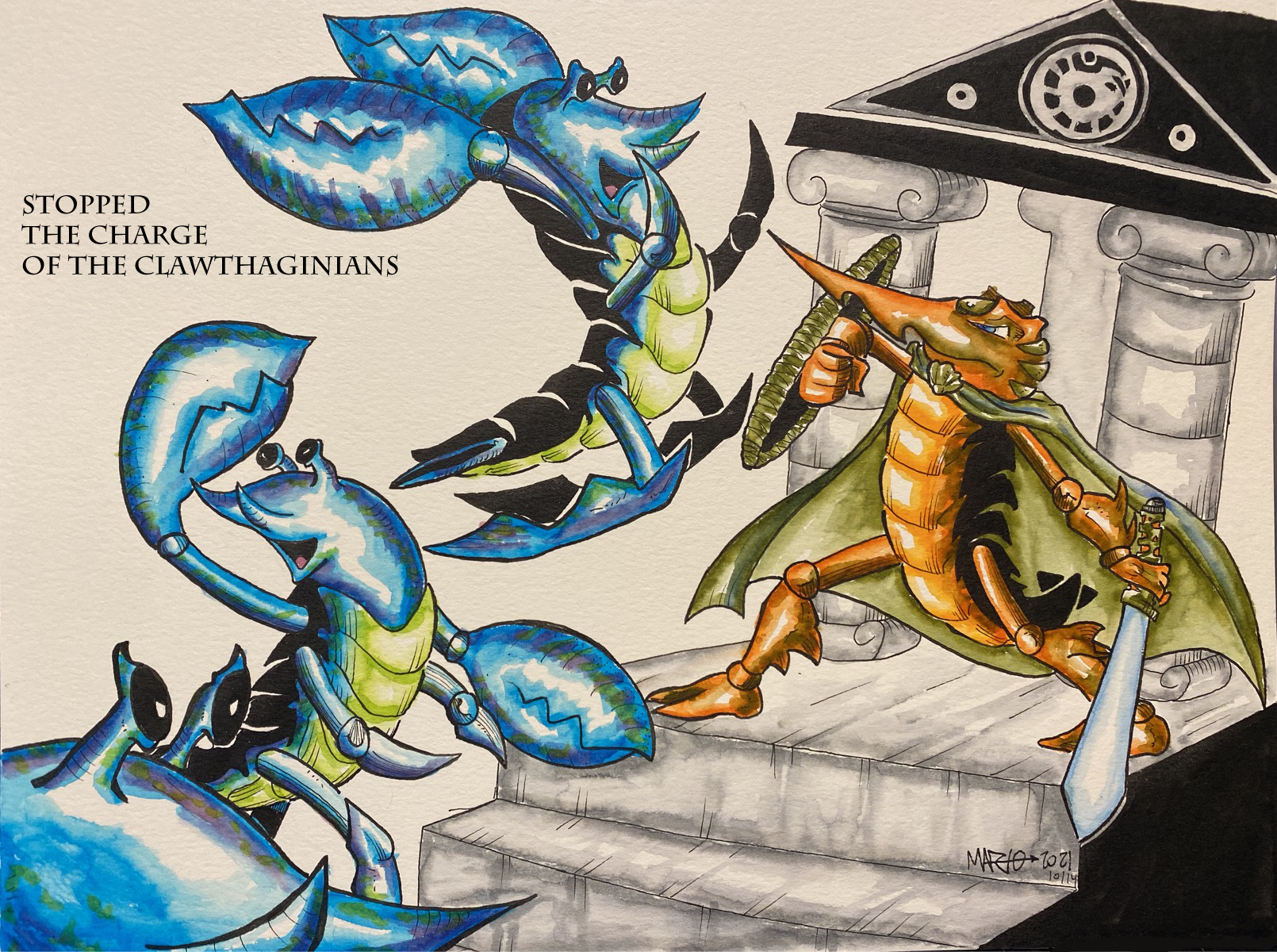 The Clawthaginians are surely among the fiercest of Battle Shrimp's foes!

Thursdays are busy for me, and I bit off a bit more than I can chew for this next prompt—it's now past quarter to midnight my time, which means I've got to call it a day! So this image is missing the shading I usually do. Maybe it's okay without? Maybe I'll do a 'fixed' version later.

In any case, my next image is of Celica from "Fire Emblem": 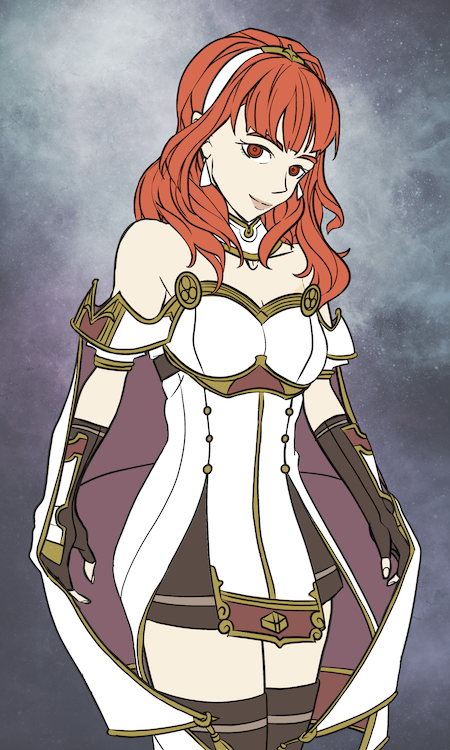 Specifically, she's one of the protagonists I believe of "Fire Emblem: Echoes", which is a remake of the second ever Fire Emblem game, Fire Emblem Gaiden. I actually briefly played a bit of Gaiden some years back, but felt Famicom-era Fire Emblem was a little too back to basics for me. Naturally, I've yet to play Echoes, as I'm still backed up playing older Fire Emblem titles. Too many games to play (he whines pitifully).