So an update on my end:

I saw a video awhile back talking about how if you make under 38k a year you will probably qualify for financial aid from the hospital nullifying your bill. Since I'm just a student, I was pursuing that and found that Medicaid can act retroactively to pay for medical bills. still waiting to see if this takes care of my entire bill or not but I'm glad I didn't pay that bill and just kept trying to find ways out of it.

Thank f*cking God we don't have that evil government between patients and their doctors....we we can just have insurance decide it all.

Insurance giant's new ER policy called 'dangerous' by critics. It says as many as 1 in 10 claims could be rejected.

Insurance giant UnitedHealthcare is cracking down on emergency room visits with a new policy starting July 1 that the American Hospital Association says will jeopardize patients’ health and threaten them with financial penalties.

The American College of Emergency Physicians said it fears the change will cause patients to avoid using emergency rooms because they will be responsible for their hospital bills when UnitedHealthcare rejects them.

UnitedHealthcare this month told its network hospitals in 34 states that it will assess emergency room claims to determine if visits were indeed medical emergencies.

What would be the word for that? Some kind of board? A panel, maybe? For death? A death panel?

A smart ad agency should push "Life panels" and see if they can dupe evangelicals into fighting for it.

A smart ad agency should push "Life panels" and see if they can dupe evangelicals into fighting for it.

What would be the word for that? Some kind of board? A panel, maybe? For death? A death panel?

Yeah, but it won't be a panel of faceless, unelected government bureaucrats deciding whether or not gram-gram dies.

It'll be a panel of faceless, unelected corporate bureaucrats who will be financially incentivized to deny every claim deciding whether or not gram-gram dies.

Yes that is what always annoyed/confused me about the whole "government getting between you and your doctor" BS people spewed. Under the current insurance system there is already a third person in the room with you and your doctor - but you can't vote that person out of office.

The Supreme Court dismissed a challenge to the Affordable Care Act on Thursday in a decision that will leave the law intact and save health care coverage for millions of Americans. The justices turned away a challenge from Republican-led states and the former Trump administration, which urged the justices to block the entire law.

The justices said that the challengers of the 2010 law did not have the legal right to bring the case.

I like this article title better for this win 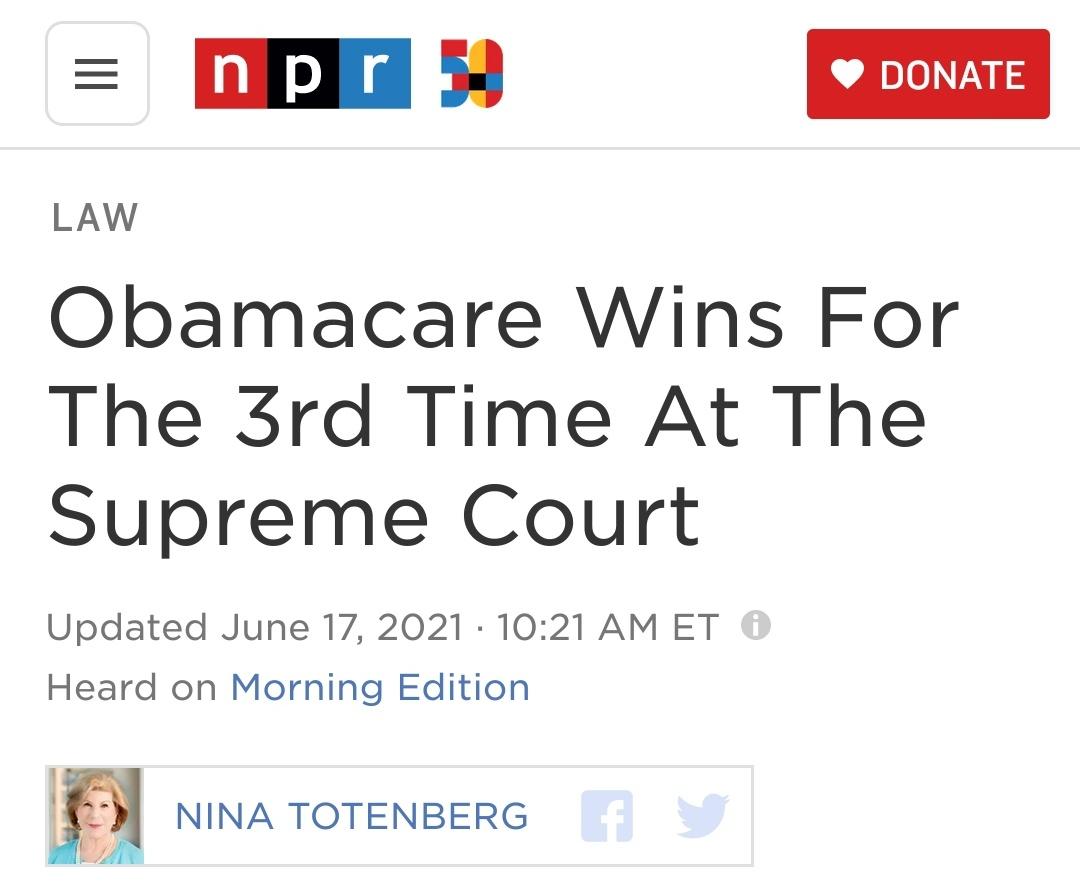