Of course, the kicker is that Brown is in the final year of his deal and will require either franchising or extending. Supposedly the Chiefs are going to have him play out the final year of his deal. It seems likely thanks to his age and the difficulty of finding good tackles that he's likely to get significantly overpaid, assuming he doesn't take another step forward this year (which could happen, he's improved his grade each year at PFF, if only incrementally).

Poor Mahomes. Just goes to show the best attribute of any GM is humility and it seems like the KC brass has decided they’re smarter than consensus. Really starting with the Frank Clark trade and signing it should have been a sign that Mahomes was more of a fluke pick than a stroke of genius. Yes they won a Superb Owl on Mahomes’ rookie deal but between the CEH and LB picks last year in round 1/2, the guard market setting deal with Joe Thuney, this trade. Man.... I just doubt. There’s no smart moves in there. They structured Mahomes’ deal really well but the utter lack of awareness for team building is kind of appalling. I guess you’re hoping Mahomes can truly make it work with bottom of the barrel receiving depth. Just sad seeing a team potentially waste a generational talent.

Maybe they can move Orlando Brown Jr. to right tackle or guard once everyone gets healthy?

I do wish Baby Zeus well and hope he does achieve his dream.... just not against the Ravens.

I wonder though if his performance as an LT may have benefited a bit from the Lamar Jackson Effect. The Ravens, as has been well publicized, pass less than any other team in the league by a wide margin and their run concepts approach pressure from the blind side very differently than most defenses are used to. In the two games they played against the Cowboys, for instance, they left Demarcus Lawrence entirely unblocked on at least a dozen plays -- a concept unheard of in conventional football.

It may be difficult to extrapolate future potential based on past performance only in a Lamar Jackson system, particularly for LT. The way the Ravens play offense makes that position somewhat less important, oddly, than RG (which may be the most underrated position in all of football btw).

Like I said, I wish him well, but I also sort of wish he got his money up front as I fear he may see a drop off in his performance when he faces more consistent pressure while blocking in a pass first/only scheme. 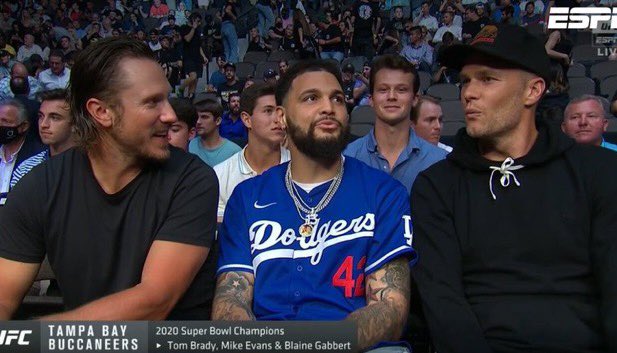 The GOAT. A great WR who could be on a HOF career trajectory, if he keeps it up. And Blaine Gabbert.

That man is really living the life.

I'm not amazed that there's only one mask in the whole photo.

I don’t see Joe Montana in that picture.

PFF just did a ranking of all 32 team rosters post-free agency and pre-draft; not surprisingly, the Bucs come in #1 in their ranking, but Kansas City is #3. Who, pray tell, is #2?

PFF just did a ranking of all 32 team rosters post-free agency and pre-draft; not surprisingly, the Bucs come in #1 in their ranking, but Kansas City is #3. Who, pray tell, is #2?

Thanks, I hate it.

Looking forward to this team imploding, everyone getting fired, and starting the rebuild again.

Panthers at No. 29 on the PFF list seems about right.

There seems to be a lot of back-patting in Charlotte because of all the free agent signings. But Carolina's roster in 2020 was mostly just a bunch of guys, and they've been replaced in the offseason by yet another set of guys: run-stuffing LB LB Denzel Perryman, one-hit-wonder edge rusher Haason Reddick, OL Cam Erving (who graded out as the worst LT in the league last year), another WR named Moore (D Moore of Seattle to go along w DJ Moore), the husk of CB A. J. Bouye.

Meanwhile, Carolina has the No. 8 pick in the draft. The Panthers are planning to either:

* Trade down, but not outside the top 16 because that's how many players have first-round grades according to the Panthers

* Trade down outside the top 16 because picks

* Trade up to get a top QB because YOLO

My team is so dumb.

Edit: One more scenario: The Athletic's Joe Person, who has covered the Panthers for years, suspects they'll pick CB Patrick Surtain II with the No 8 pick. It's definitely an area of need.

OK, fine, my draft preview. SOMEBODY has to do one.

San Francisco does, in fact, take Mac Jones, because Kyle Shanahan is drafting for himself, and not the team. One of the reasons Don Shula is widely considered the best coach ever is about the way he was always willing to adapt his scheme and strategy to the players he had available rather than picking people that would play the scheme he liked, and there appears to be some chance Kyle Shanahan is not quite Don Shula (insert OBLIGATORY 28-3 reference here). Listen, I don't grind tape or watch college football at all, but, historically, Alabama QBs are great in college and suck in the pros, largely because the third-string guy at Alabama is probably better than the starter on the other side. Sure, maybe Mac Jones is an outlier and the fact he was throwing to two WRs who are probably going in the top 15 isn't responsible for his success, but, uh, I think I know where I'm putting my money on this one. Also, 28-3.

Atlanta takes Kyle Pitts, which is clearly crazy high for a TE, but Matt Ryan has some years left and why not build around him?

Justin Fields is the next Patriots QB. Bill's running out of time here and needs to make a splash after Tom Brady won with another team. He can't ride the corpse of Cam Newton another year without trying to cement his legacy for the future; he'll get into Detroit or Carolina's spot for Fields.

Five QBs go in the top ten. It's the modern NFL.

The Saints have Taysom Hill and Jameis Winston at QB. There's no real preview here, but that just never stops being funny.

The Bucs trade out; everybody wants that last pick in the first round for the extra year on the rookie contract, so they'll sit around on Thursday night.

The Saints are in the worst cap position in the league and the fifth worst dead money position. With significant holes in their roster to fill, do they dare roll the dice with a franchise qb that they won't really be able to evaluate for years while they get their financials under control?

Sure, maybe Mac Jones is an outlier and the fact he was throwing to two WRs who are probably going in the top 15 isn't responsible for his success, but, uh, I think I know where I'm putting my money on this one.

It certainly was the case with Johnny Maznziel and Mike Evans. And a lot of us were saying just that.

The Rams are having way too much fun with the draft:

Trade down, trade out, get future 1st

Draft two WRs and then can't develop them.

The Rams are having way too much fun with the draft:

There's nothing else they can do with the draft at this point.

You asked for it. Enjoy, assholes.

Thanks for including the comma.

Names spotted in these polls:

I'm still hoping they're basically happy with the current name and Washington Team Football sneaks in.

PS - It's still the offseason thread until there's a preseason game right?