There's a TNG precedent for the burn. There's an episode where they find a bunch of planets that have excessive amounts of dilithium in them, and they are essentially self destructing because of it. Someone could've figured out a way to do that to all dilithium somehow.

I dunno, I feel like Star Trek is just too big a franchise to try to explain how everything works. The idea of a galaxy where FTL is rare is fascinating, but it's pretty easy to poke holes into that if you try. Trying to defend it is a futile argument. You just gotta embrace the MST3K mantra and go with it.

Disclaimer: Not a trekkie (I don't care about canon, or continuity or the science making sense, and only partly because none of the writers of any of it care either), but I've seen 90% of the assorted shows and films (I have no access to Lower Decks).

I liked it. I enjoy Disco more than the other shows because it's trying to do something different, rather than just fanservice long term fans, which is what I found Picard to be (I watched TNG at the time, but I don't think I could go back to it now, and these days I want something else).

I liked the "Burnham tripping" sequence - I enjoyed watching her be a bit crazy instead of just Very Earnest And Serious. I was somewhat disappointed that Book turned out to be an ecowarrior - I was hoping for a more rogueish type to offset Michael, rather than a differently earnest character.

There can't be too many Trek episodes with no white humans - that must be some kind of record. I thought that was cool.

I liked the season premiere. Discovery overall is very different Trek, and I think that's great! Really looking forward to this season.

As for Aditya Sahil, waiting patiently on a space station for some kind of Federation representative... 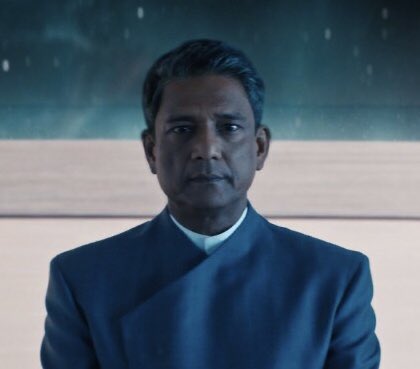 Reminds me of me, from 2004-2009 when there were no Star Trek movies or TV shows. Just waiting patiently with Federation ideals in mind. Aditya is the ultimate, final form Star Trek fan.

I decided to give season 3 another chance after the disappointing premiere and the second episode is a vast improvement. Saru makes an excellent acting captain and a fine replacement for Pike. There was still a fair bit of stupid, but that's par for the course for Discovery. I've accepted that. It's stupid mixed with boring that I can't stand.

I'm definitely eager to see where Discovery goes with the rest of this season. Part of me is wondering if "The Burn" ends up being some riff on Burnham's name, after hundreds of years had passed.

kazooka
Posted: November 5, 7:52 AM
Do not block this end hole

I'm real curious if Michelle Yeoh is doing her own fight coordination, or if she brought someone over from Hong Kong. The action sequences in this season look a lot more like old school Hong Kong films than the bloodless stuff we get out of Hollywood.

edit: bonus clip of her casing a motorcycle stunt in Supercop and nearly ending everything, as well as her showing off her fight chops

edit2: I'm now reading that she had never ridden a motorcycle before filming this

edit3: Okay, that's apparently an exaggeration. She had ridden a motorcycle for two weeks before filming this.

It is funny that Riker directed this episode considering his character was joined at one point.

Episode 5 of Season 3 sure had a lot going on:

That's a hologram of Georgiou now on Discovery.

I love all Star Trek. My oldest (18) caught up on TNG and DS9, but couldn't get into DSC and fell off it during the first season. Bummed, I've watched DSC alone since then. Fortunately my youngest (16) started watching Lower Decks with me, having never watched other Trek, and he really likes it, probably because he's a Rick and Morty fan and likes the animation and wacky banter.

Re: DSC Season 3. Liking it so far. Agree with others that it's weird people would still be pining hard for the Federation so long after the Burn. I can see where it would become a glorified myth for those suffering in a post-apocalyptic universe where FTL is rare. But for generations? I mean, in Star Wars they forgot all about the Jedi in 20 years.

There's a TNG precedent for the burn. There's an episode where they find a bunch of planets that have excessive amounts of dilithium in them, and they are essentially self destructing because of it. Someone could've figured out a way to do that to all dilithium somehow.

Good find. I'm also reminded of the TNG episode where it's revealed that FTL travel is damaging subspace, causing Starfleet to restrict speeds above warp 5 except when the plot requires.

The last two episodes have been better and getting close to good. Shocking. I am curious to see where this goes.

WTF was up with the garbage effects when they showed up at Stafleet HQ?

Wondering how much of the effects were hindered there due to post production at home.

Wondering how much of the effects were hindered there due to post production at home.

I'm hoping they're teasing some future details with their descriptions in this episode. They've got the rest of the season to do stuff, so I'm keeping a tight rein on my expectations until it's over.

Great, thanks to Discovery's refit, I've got "Detachable Nacelles" to the tune of "Detachable Penis" stuck in my head.

Great, thanks to Discovery's refit, I've got "Detachable Nacelles" to the tune of "Detachable Penis" stuck in my head.

I woke up this morning with a bad space-hangover
And my nacelles were missing again.
This happens all the time.
They're detachable.

This comes in handy a lot of the time.
I can leave them home, when I think they're gonna get me in trouble,
Or I can rent them out, when I don't need them.
But now and then I go to a planet, get drunk,

And the next morning I can't for the life of me
Remember what I did with them.
First I looked around my home sector, and I couldn't find them.
So I hailed the sector where the planet was,

They hadn't seen them either.
I asked them to check the Romulan Neutral Zone
'Cause for some reason I leave them there sometimes
But not this time.

So I told them if they pop up to let me know.
I hailed a few people who were at the planet,
But they were no help either.
I was starting to get desperate.

I really don't like being without my nacelles for too long.
It makes me feel like less of a man,
And I really hate having to go impulse every time I take a trek.
After a few hours of scanning the quadrant,

And hailing everyone I could think of,
I was starting to get very depressed,
So I went to Kalaw's, and ate Gagh.
Then, as I went at full impulse towards Altair IV,

Where all those Ferengi sell used ships and other junk for gold-pressed latinum,
I saw my nacelles lying on a space barge
Next to a broken toaster oven.
Some guy was selling them.

I had to buy them off him.
He wanted twenty-two slips, but I talked him down to seventeen.
I took them home, retrofit them,
And put them back on. I was happy again. Complete.

People sometimes tell me I should get them permanently attached,
But I don't know.
Even though sometimes it's a pain in the ass,
I like having detachable nacelles.

Yeah, pretty much that.

Yikes this thread. I'm enjoying the season a lot. No real complaints. I'm probably an idiot though. I'll take my discussion of plot points elsewhere I doubt there can be any discourse here.

The only real complaint I have with season 3: Where are the Klingons?

The only real complaint I have with season 3: Where are the Klingons?

kazooka
Posted: Yesterday, 10:46 PM
Do not block this end hole

I am largely enjoying this show, but I have one pretty big complaint: they have got to stop treating the non-starring bridge crew like this weird hive mind. The only time any of them get lines is when they're coming together to support the other characters. And it's starting to cause some semi-serious plot holes. I'm not going to go full spoiler here because, frankly it's not that interesting or surprising of a plotline:

Saru wants to make Tilly the First Officer, but Tilly is having doubts because she's only an ensign. (Incidentally, there's no reason she should still be an ensign, but maybe there's time-in-service requirements or something). Saru assures her that there's no one more qualified, and truthfully, most of the bridge crew seems either a little bit green or is working through some stuff. But there's one exception: Joann Owosekun the operations officer who's only ever been portrayed as hypercompetent. She was awarded the Starfleet Medal of Honor along with the rest of the crew, and has only ever been a steady presence on the bridge. Isn't this who you want as your First Officer rather than the insecure and inexperienced ensign? If you've been paying any attention to the rest of the bridge crew, then maybe you have some explanation as to why Owosekun doesn't want the responsibility or is too important in their current position or something of that nature. But if you only drag them out to reaffirm the main characters, then they're going to look increasingly artificial, or you're going to start wondering why they don't have anything to do.