Badferret
Posted: August 11, 8:31 PM
The Musk is strong with this one

deftly
Posted: August 11, 9:50 PM
It Burns When I Everything 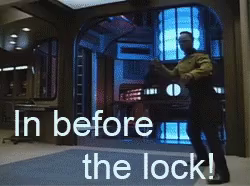