I got my first Alliance character to the level cap a few days ago. Right now I’m poking around with the various side quests in the leveling zones. I also have what I’m pretty sure is the quest that takes me to Nazjatar, but I’m holding off on that for now. Is there a resource somewhere that will list out the quests leading up to the raid on Zuldazar? I’d kind of like to see the story roughly in order while I’m at it.

wowhead
I'm sure they have a nazjatar and/or zuldazar guide.

That's the beginning of the expansion from the Horde POV and the raid guide.

I just want to make sure I don't miss any setups for the big fake-out in Nazmir or the bombs planted in the Zandalari ships. And I'd like to do all that stuff in order if I can. Though I guess that isn't too big of a concern... it's not like I don't know the broad strokes from playing all that from the Horde POV so it shouldn't be too hard to work out the actual order of events from the other side.

Just follow the War Campaign quests in your log. Don't do send the fleet to Nazjatar. The Quests all originate on the Main Ship and it should guide you up to The Nazmir part and the Zuldazar Raid after. I did it a few weeks ago on my Alliance Alt.

Yo Vargen! Here is the entire 117-quest Ally war campaign questline that leads to getting Shandris Feathermoon as your champion.

If you've done all of the quests in the Horde zones (the ones that unlock followers), you're probably at No. 57, "Overseas Assassination." That's followed in order by "Operation: Blood Arrow," "Operation: Cutpurse," "Operation: Gryphon's Claw" and "Operation: Heartstrike." There are a ton of orange exclamation points all over the damn boat. Click carefully. And note that some of these War Campaign quests might be gated depending on rep. (I can't remember if Honorbound rep counts toward unlocking things gated by 7th Legion rep.)

Wowhead has a text-heavy explanation of the War Campaign here.

Also: I'd go ahead and do the Nazjatar intro quests as soon as you can. They don't seem to fit into any particular sequence, which means you can do it in any order relative to the War Campaign. But you can get a follower after only about 10 quests and maybe 15-20 minutes. An extra follower means more gold, more azerite and more rep.

PS: I had to look up all of this stuff recently. My main had done all this last year sometime, and when I got serious about my alts, I couldn't remember how to get all those extra followers. I really need to do the Horde campaign from end to end without stopping; I got interrupted too many times that I lost the thread of the story. I think I liked it -- probably a little more than the Ally story, to be honest. I mean, Bwonsamdi, amirite?

I've established the footholds on the three Horde zones, but that's it. I've put in enough time on my Horde characters that spending more time there on my Worgen hasn't been a priority. Thanks for the links though; that'll be a handy reference once I chew through all the side quests in Stormsong and Tiragarde (I think I'm mostly done with Drustvar).

Is it me or does it seem like horde get more flight points in kul tiras than alliance get in zuldazar?
It may just be that the mobility of my BE DH made that much more difference.

Anyways, I have found new love for my DK. Except it is with blood spec. I feel nigh invulnerable against 4-5 monsters and with damage focused azerite traits, there is much less of a damage gap. The icing on the cake is the frost something power that costs 1 rune but gives my party water walking for 10 minutes. Talk about a complete 180 when it comes to mobility on the class

And my Druid is now a mildly respectable IL 365. I have spent some gold on transmogs and I really love the look of my DK and some of my foxies. I'll post pics or a collage soon 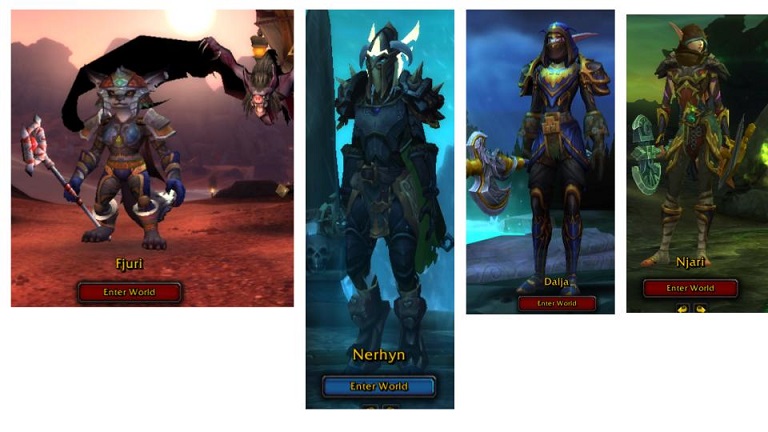 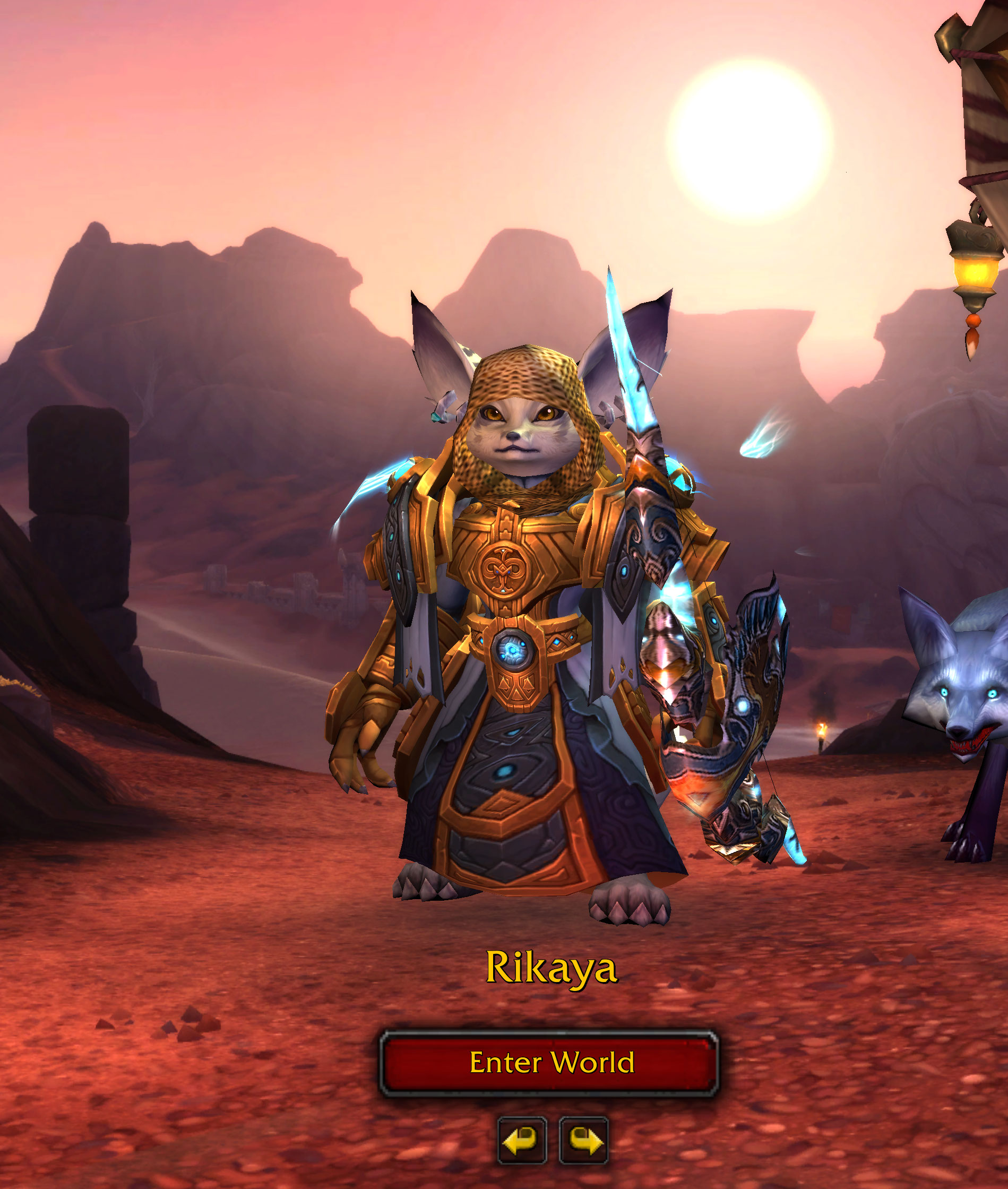 side note: I don't care what anyone says, I love survival spec hunter! (I admit it is hard to pass up 2 pets though)

I have never leveled a Horde anything, so I says to myself, I says, "Hey! Level up a Blood Elf Demon Hunter!"

I took the easy route with a BE DH?

Yes!
I make no apologies either. I did the same ;P

FWIW an Alliance DH is most likely my first new alt once the pre-patch hits. It is absolutely criminal that we don't have the option to level a lowb DH currently.

I crack myself up with the thought that I may not see the new shadowlands content for ~6 months post launch due to leveling a smorgasbord of alts from 1-50 with the level squish. If it is any indication, I am having a blast with party sync and that is just a small taste of the level squish.

As a PvE Horde player, a new DH is ridiculously fun to play. I am having a ball with the mechanics.

As a PvP Alliance player, DH's are the bane of my existence.

I already have a hunter main... but this makes me really really tempted to roll fox hunter.

No kidding about Demon Hunters.

I LFG'd last week into a 5-man to work on the Tailoring quest for my warlock. That instance was a greasy spot once that DH was finished with it. I barely had the time to get off insta-cast spells. After a few pulls, I really didn't see the point of even trying. I have never ever seen a tank like that. It was ... man, no words.

In unrelated news, I saw the 7th Legion emissary quests were up last night. Hopped on my main. Didn't feel like jetting over to the Horde zone. Took the portal to Darkshore instead. Alas'anir (the 122+ that drops the chimera mount) was one of the quests. I've been trying to hit it about once a week or so because of the mount. Damned if the chimera didn't drop.

10 minutes later, I saw Agathe Wyrmwood was up. I'll be double-damned if she didn't cough up that bear mount.

Very nice drops Enix! I like Blackpaw quite a bit.

CaptainCrowbar
Posted: May 13, 2:19 AM
Junior Executive

I’ve never tried a demon hunter. Now that my fox is approaching 120, maybe I should give it a try next.

Demon Hunter is pretty simple from the dabbling I’ve done, though you can talent into a bit of complexity if you like. It’s probably more fun earlier in expansions before everyone can fly, as the wings feel like cheating.

Gliding is a huge help if by some chance you haven't unlocked flying in BFA too.
How long do goblin gliders last btw? An hour? Are they a single use? (that would be so stupid!)

CaptainCrowbar
Posted: May 13, 5:31 AM
Junior Executive

Gliding is a huge help if by some chance you haven't unlocked flying in BFA too.
How long do goblin gliders last btw? An hour? Are they a single use? (that would be so stupid!)

They're single use, and they last for a maximum of 2 minutes. The glider disappears as soon as you touch anything. Thee's an engineers-only version that has unlimited uses, although it's incompatible with the special 8.3 cloak that counters corruption, so you have to be prepared to swap cloaks quickly if you want to use it.

That is such an oversight. A real missed opportunity because while not as pinpoint functional as flying mounts, gliding is WAY more fun. (one of my fondest memories of BFA is gliding halfway across Drustvar- I bet you can imagine the area I'm talking about...)
Another oversight is the ability to glide off or jump off and glide when taking a flight path.

There are rumors of winged allied race(s) in Shadowlands. I can't imagine how crazy popular they will be once implemented. I also want to see statistics on the new lowb DH (DK's too) alts. The only real limiting factor is lack of race choice. (gnome, worgen, panda, draenei or tauren DH's should be a license to print money)

All this talk of gliding makes me want to at least be able to adopt the Zen Flight pose on the ground in areas where flight is restricted.

One of my favorite things to do in every expansion before I get flight is to climb as high as I can -- some of those mountains are huuuuuuge -- and see how far I can glide. A good glide can go at least half of a zone. Pally bubble is my failsafe.

If any of you Blackhand-A folks need goblin gliders, I'm happy to make 'em. Or switch to engineering. Up to you.

Or main a DH

One of my favorite things to do in every expansion before I get flight is to climb as high as I can -- some of those mountains are huuuuuuge -- and see how far I can glide. A good glide can go at least half of a zone. Pally bubble is my failsafe.

If any of you Blackhand-A folks need goblin gliders, I'm happy to make 'em. Or switch to engineering. Up to you. :D

apparently in shadowlands one of the new neer things is 4 different gliders, each in the style of one of the covenants.

How is Shadowlands's world structured, anyway? Are the different realms each their own map, or are they contiguous like other continents? New gliders are a lot less exciting if there's nowhere to go from the top of the mountain.

Based on a quick search they appear to be 5 separate islands. Moving around similar to possibly how it was
on Argus .

In a really dumb decision, Blizzard is ending the rep buff on the 18th.
Since they are going away with the rep requirement for allied races in Shadowlands, I don't get this decision at all. I mean if the prepatch were say a month away i could see it.

But the release window for Shadowlands is Oct-Dec. So the prepatch is several months away, probably no earlier than maybe August if I was being super optimistic. I mean I guess they could go into beta for June and July but even that seems aggressive. We've got 2 more weeks of May and they've had a few alpha patches already.

In a really dumb decision, Blizzard is ending the rep buff on the 18th.

Eh, it's what I figured. Blizzard promised a rep buff for a month. We got a month. It was good while it lasted.

Update: I just caught up on my MMO Champ and Wowhead news, and it looks like Blizz is promising a new buff next week that will help alts catch up. We already have the double XP buff, which is supposed to stick around until the SL pre-patch drops. Blizzard's being coy about whatever this new thing is.