They flicker towards the top. 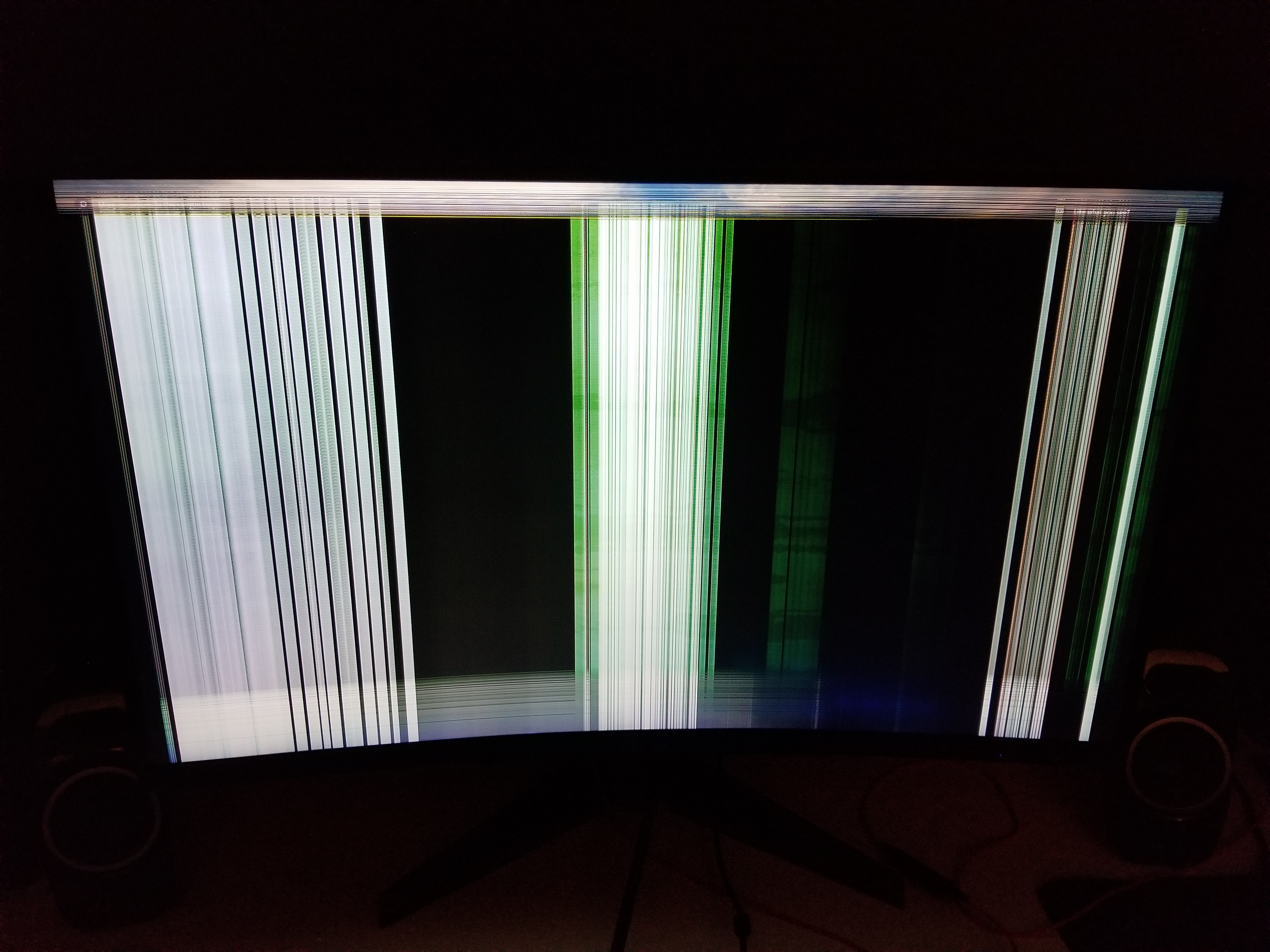 Oof. Tried switching the cable? Hope it's still under warranty.

So two updates. First, the scanlines are very slowly receding. I don't know why. But it's slowly getting better from the top down. Second, I just tried switching from Display Port to HDMI and the problem went away entirely. So I guess that leaves me with a few conclusions.

The panel itself is fine. Either the monitor port is broken somehow, the video card port is broken somehow, or the cable is broken somehow. Switching Freesync on and off did nothing. Turning the GSYNC on and off in the Nvidia options did nothing, yes they work together great when everything is actually working. HDMI only allows up to 120hz, so I suppose it's possible something about the 144hz i use with Display Port is causing it. The problem manifests immediately at startup, during the BIOS screen, so I don't think it's a Windows issue. I ordered a new Display Port cable, we'll see what happens.

Edit: Another update, switching to 120Hz from 144Hz in the Windows Display Options fixed the problem, while still using Display Port. Still doesn't answer the question of what it could be though.

Edit2: The problem has gone away at 144Hz now. Very strange. Here is someone having the exactly same problem on a Samsung C27HG70 screen. Keep in mind that Samsung supplies MSI with their screens for the models in question.
https://www.reddit.com/r/Monitors/co...

Why would an LED monitor need to "warmup", weird. Anyway, bought a new cable, we'll see if that does anything. But for now, the problem is gone.

Replacing the cable did not fix the situation. I turned off my computer for 24 hours when I turned it on it was still flashing. But it went away after about 20 minutes. At this point I can only assume that this is a problem with the screen or the hardware inside the screen. It works most of the time so I'm hesitant to send it in for repairs or replacement. I'll be without a monitor for days.

MrDeVil909
Posted: September 12, 5:43 AM
Will you please stop screaming

Yeah, that looks like what happened to my TV when the panel was on its way out.

It will probably get worse so just make sure you get it fixed before the warranty is done even if you don’t want to do it now. Maybe send it in before you go on vacation or something.

I have a similar monitor to you, which I bought after my Acer Predator monitor did something similar to this. Luckily it was under warranty (just), and in the report it said that the panel needed replacing.

Thanks for that input. I got an RMA for it, but I'm struggling to motivate myself to send it in. It would mean being without a monitor for weeks. Plus, they may not be able to get the error to show itself. Plus it could get damaged in transit. And it works now. So I'm not sure whether I should or not. I probably should.

Jameswiththemonitor
Posted: May 13, 10:24 AM
Coffee Grinder

Not to re-open an old thread, but my MSI Optix MPG27C screen has developed the same issue; I turned it off last night after black horizontal lines appeared, however this morning the monitor has the same black picture with coloured vertical lines.

I appreciate you posting the workaround by changing the refresh rate to 100hz, as after 10 mins of waiting, enough of the picture loaded to be able to do that.

Just as a matter of interest, did you return the screen in the end or did the issue continue to go away?

Thanks for the help!

Sorry, I just noticed this thread pop up again, for a funny coincidental reason. We had a bad storm and some electrical outages, so I had shut my computer down last night. I turned the computer on this morning and the lines were back, the entire screen was filled with them. But after about an hour they were all gone and it was working fine. So to answer your question, I never did return it because I found the hassle of that to not be worth it.

So it's not a monitor destroying issue it seems, because it's been working fine since my last post, I never turn it off.

On the other hand, I am currently shopping around for a new monitor because of this issue and trying to decide if I'm willing to spend another $400-$500 for a temporary problem.