Holy crap, that race. We were braced for a snoozer given how amazing the last two were, but once again glued to the couch the entire way through. I feel bad for next week's race already.

Also, apparently Alfa got busted for running some sort of driver assistance, so not only did Hamilton actually bring home a few points in the end, but Williams also took one as well. What a crazy result.

The FIA just has to figure out a way to take out half of the field every race.

That was definitely the most entertaining race I've seen.

Also, apparently Alfa got busted for running some sort of driver assistance, so not only did Hamilton actually bring home a few points in the end, but Williams also took one as well. What a crazy result.

The Alfa penalties mean that somehow after that cluster Hamilton actually has a bigger championship lead.

What a race! Best in a very long time.

Was super happy with zero points for Mercedes, but I suppose I can accept Lewis getting 2 if it means Kubica getting one.

Can't help but feel Germany was Peak "Bottas is Unlucky." Both him and Hamilton spin in nearly exactly the same spot, but Hamilton spins himself back onto the track and still manages to get points, Bottas spins the other way and ends up in the wall. It's hard to tell how much control either driver had but I can't help but feel that "the more I train, the luckier I get" applies. Hamilton really is on another skill level.

The last few races have just been so great to watch. I love how much close racing there has been, especially in the midfield.

Kimi managed to recover after hitting that ice patch too. I'm sure some of it was the luck (or not) of physics, but some of it sure seems to be driver skill.

And hell yeah, F1.5 has been amazing.

I think Bottas said that was the first lap after he was told to push. He didn't seem happy with his engineer. Either way, Hammy is for sure the better driver.

Another fantastic race. Our cups runneth over, for reals.

Not feeling super good about GAS and BOT though.
GIO should probably go too.

Another fantastic race. Our cups runneth over, for reals.

Yeah, as relatively new viewers, I thought we were supposed to be bored by most of the races.

Not feeling super good about GAS and BOT though.
GIO should probably go too.

Yeah, it's tough. For a while it was hard to know how much of it was Gasly underperforming the car and how much was Verstappen overperforming it, but either way it's definitely feeling like either Albon or Kyvat could be making better use of it, right? On that one it feels more of a question of when the driver switch should come rather than if.

Bottas is an even tougher situation. Up until two races ago, it's not like he wasn't doing the job they needed him to do. The last two, well, yeah. But, even if he'd managed to meet expectations in the last few races, it’s a rock and a hard place kind of situation. Hamilton is showing no signs of slowing down, but if you’re Mercedes you want to make sure you’ve got the next big generational talent lined up to take the reigns once he does decide it’s time to hang it up, and as good a driver as Bottas is, he very likely will never be that. Dispositionally he’s an ideal teammate to be driving alongside Hamilton, but is that worth missing the opportunity to get a young, fresh talent into a closer mentorship situation for the next few years?

Of course, it’s still a bit of a question mark as to whether either of their current candidates really are what they’re looking for. But even if they don’t prove out, it’s probably a lot cheaper to give Ocon a chance now, then maybe promote Russell if that doesn’t work out, and get through all that uncertainty while Hamilton is still rampaging through the record books and raking in points. Then, you know, if neither of them ends up working out you just open up the pocketbook and buy out Verstappen (or maybe poach Lando from McLaren if he keeps developing well).

Whatever the scenario ends up being, though,, it doesn’t look good for Bottas if Mercedes wants to be forward looking rather than just make sure they continue to have a good team player to back up Hamilton for the next few years.

That guillotine noise was Pierre Gasly losing his Red Bull seat to TR rookie Alexander Albon for the rest of the season.

Albon has been a really pleasant surprise in his first season, but he's behind his teammate who already failed out of Red Bull, and if the gamble doesn't pay off RB could derail Albon's progress and end up with three drivers they've no real confidence in.

I guess at that point you put someone like Hulkenburg in the car for 2020, but I'm sure he's not going to want to wait to the end of the season to get his deal sorted out. If Renault offer him a contract I suspect he'd snap it up just to make sure he doesn't end up lost in the shuffle.

I presume all RB want is a "Mark Webber" to take points and not screw things up for the lead driver, so if Albon can finish sixth in every race for the rest of the season that would be enough.

Wow, Albon eh? I've been impressed by him for sure, but I was sure that if a summer break switch was going to happen it would be for Kvyat. Past history aside, he's also been doing very well in the Toro Rosso and he's got a bit more experience under his belt -- and, if that it doesn't work out it would have been easier to switch to someone else (ie, Albon) next year without potentially having burned another promising young talent by putting too much pressure on them too quickly. Maybe they just weren't sure that Kvyat would have been an agreeable second driver for Verstappen or something?

Either way, I hope it works out -- I really like Albon, and it would be exciting to see him rise to the occasion and help Max take a bigger bite out out of the frontrunners.

That guillotine noise was [url=https://www.bbc.com/sport/formula1/4...
Albon has been a really pleasant surprise in his first season, but he's behind his teammate...

Like Ocon to Botas/Perez, maybe Albon is going to have a higher ceiling?

I thought the same, but: 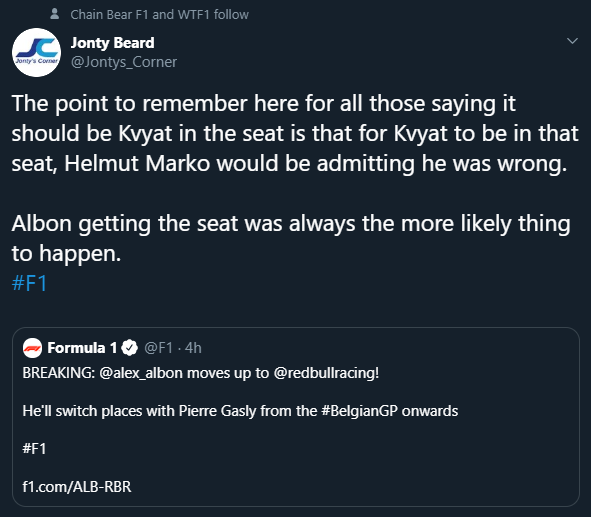 But, I mean, as a reply to that tweet says, he's been totally proven right already simply by how good Verstappen has been.

Also, they decided to bring Kvyat back to Toro Rosso -- sort of seems like they thought it was time to let him try again, right?

I don't like that Tweets logic. Not because I have any affection for Helmut, but Kyvat just gave a few easy excuses to get Max promoted. It was more of a promotion for Max than it was a demotion for Kyvat.

This WTF1 article expands on it a bit more.

Additionally, think of how it might look for Red Bull if they promoted Kvyat. He’d been demoted to Toro Rosso, dropped, brought back, dropped again (in a very harsh manner), and then re-signed for 2019. In 2017, Kvyat being demoted (and Verstappen winning every time that happened) was primo meme material. From a PR perspective, giving a driver you’ve previously dropped multiple times another shot at the top wouldn’t come across brilliantly - especially given the number of other young, non-Red Bull drivers who haven’t even had one chance. Yes, Albon was also once cut from the Red Bull programme, but he was only 16 at the time and had done just one year of car racing - quite the difference from Kvyat’s situation.

Kyvat got a Toro Rosso seat back because, who else were they going to put in it? Hartley had a season to prove he was worth it and failed, and is there anyone else in the Red Bull program that would qualify for a super license?

I think that's partly the point. Going outside of the young driver program might be a bad look?

Edit:
Switching topics, this was a very interesting discussion.

The FIA are showing off the new F1 concept for 2021. Looks pretty slick, let's see how close the real thing is to this:

They are trying to reduce downforce when following a car. According to tests with the 50% scale model downforce loss is only 10% vs the current 50%.

Of course, just this morning Autosport published this speculative "what we think 2021 should be" video, and I've got to say, I like the look they came up with a lot better than that official prototype.

Also, here's the official video for those too lazy to click and read the above link.

Seems we could have an eleventh team joining the grid in 2021!!

Seems we could have an eleventh team joining the grid in 2021!!

Assuming we don't also lose one or two of the current teams.

Here's hoping Renault can do well enough in 2020 to convince the bosses to keep footing the bill, that Haas can find a sponsor that isn't a fly by night con man running a confusing money laundering scheme, that Lawerence Stroll continues to be interested in funding his son's hobby, and that there's enough interest in preserving the sport's history to keep Williams afloat.

Losing Williams would be so incredibly sad I don't like thinking about it. Both for historical reasons as well as for Claire and how much that would just set everything back.

And Renault leaving would be the final few bars of the endless loop of Yakkity Sax that's been following Danny Ric around since last Silly Season.

Also, him again.
William Storey back in control of Rich Energy

That's the third driver in a week. It's so sad.

Yeah, that was rough. I'd really like to see some analysis of what actually happened, because the YouTube videos I saw were just of the broadcast, and they obviously weren't showing replays.

Someone created an animation as an attempt to explain how this happened:

Yo, that shows the actual impact. Un-f*cking-cool.

Chain Bear managed to give information without showing a driver's death.