But what about Ewing’s Magic tenure?

Shaq called himself big shamrock during the Celtics phase.

Anyway, LeBron is missing the playoffs for the first time since 2005.

There’s a lot of debate right now about whether this matters to his legacy. I say it doesn’t matter if it happens once, but if it’s happens again it will put a different shine on that streak of 8 straight Finals appearances.

I say it doesn’t matter because he had an injury. It he played 75+ games and this was the result yes it would matter.

Oh, I see, the eyes in the back of his head needed contacts.

Very excited for the playoffs this year (esp in the East). Giannis, Philly, TOR...any of those teams would make for a great foible to the Warriors.

Just don't see how I'm going to get to watch as much as I want though.

And gave a rambling, 90-minute long presser about it BEFORE he actually told his boss! 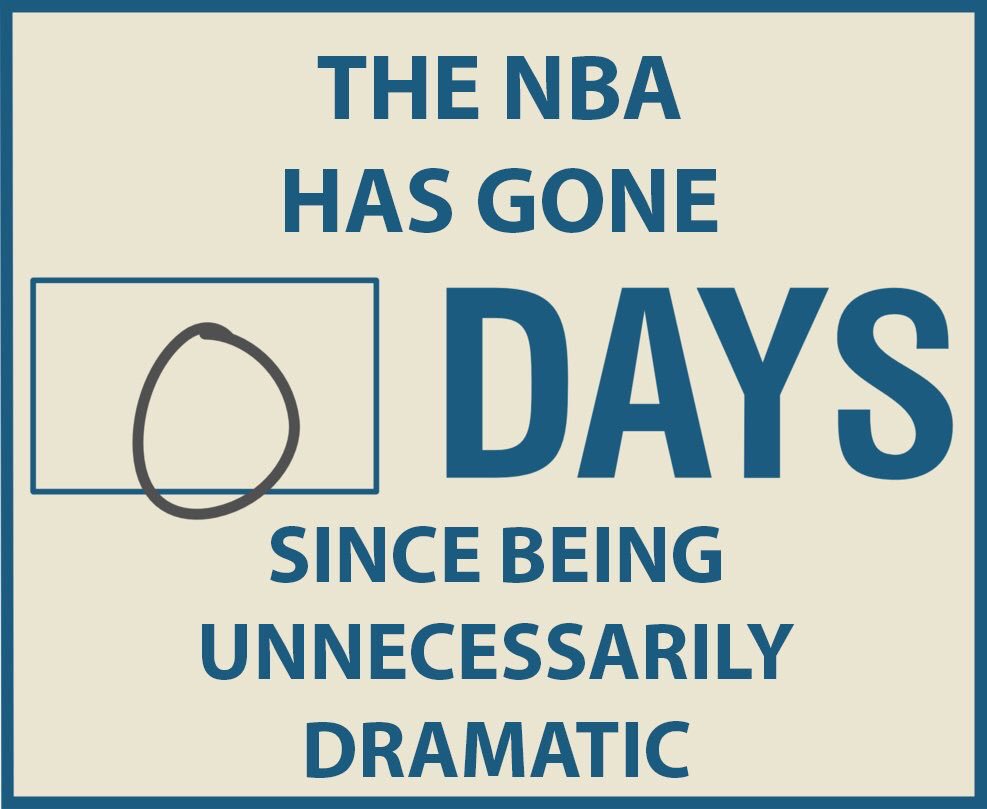 So I watched bits of that presser Magic gave. And while it was unprofessional not to tell Buss first I have to say that I was really feeling him.

Why *would* he want to do that job? He’s Magic Johnson. His life was probably great before he took the job, so why go through the headaches of dealing with Lavar Ball and LeBron?

LeBron especially is a player who basically drove at least one former coach and teammate to having panic attacks. Why put up with that when you can manage your business empire and help young basketball players?

Good for him for leaving before it got worse and before he made the franchise worse.

I agree with you DS in that if he didn't want to do it he should get out, however couldn't he wait one more day until after the last game of the season so the players didn't need to deal with it that night?

He left in an appropriate Magic way.. to make it all about himself and as dramatic as possible. That being said I don't blame him.. he has nothing left to prove so might as well say f*ck this and go back to his normal life.

I mean, if that's your team that's what you hope for. The rest of us can hope against that. Lol.

Why do you have ill-will towards Lebron? It seems like a Cavs fan should like him for coming back and taking the team to a championship and multiple Finals appearances. Not to mention all of the massive charity work he does for the area whether he plays there or not.

I have less for the decision and more for the fact that he 1) would never commit to the team, 2) used that as leverage to make several bad short-term moves, and 3) ran off Kyrie. The best thing he did for Cle in that second run (and one of the few good things) was goating Draymond into punching him in the nuts.

This is some good salt.

Haha, yeah it really didn't work out well for the Cavs. Just going to the Finals four straight times and the only championship in team history. Damn Lebron, running Kyrie out of town, we wanted more of those 26 wins seasons like the three Kyrie had before Lebron came back! Screw that guy no matter how many hundreds of kids he sends to college.

Look when you have a rich title history like Cleveland you can certainly understand the ill will towards Lebron.

The Kings finally have a surprisingly decent season and so they fire their coach. Vivek gonna Vivek I guess... i am sure there will be another job waiting for Joerger.

Since the Hornets didn’t quite sneak into the number 8 seed, I’m all in for Milwaukee first and foremost, and Denver second this postseason. Playoffs!

I was really pulling for the Hornets. Those two game winners by Jeremy Lamb were thrilling and I would’ve love to see them sneak in.

And why I don't like James. First, I acknowledge he is the second best player I have ever seen (1) MJ, 2) Bron, 3) Magic, and a realization I am too young to have seen Wilt, Kareem, or Russell). And I think he is great for the community, and generally a good guy. This is all about him being a basketball player and me a basketball fan, not about his philanthropy in the community.

First, although the decision was crappy, I don't blame him for bailing on that crappy Cavs team that was the LeBron and nobody else. And I was excited when he came back.

When he came back, he constantly threatened to leave and caused the Cavs to make some terrible trades in the name of winning now, ran off the second best player the Cavs have had in my life, and turned one of the best offensive power forward's I've ever seen into a whipping boy. And when he left for LA, he left the Cavs with nothing other than a broken Kevin Love, Colin Sexton (who I don't think will ever be anything more than a good stats, bad team guy) and a bunch of old guys who can't play.

So when LeBron moves to LA, misses the playoffs, has a TV show ruined by its host being a scum-bag (rip The Wall), and has trouble getting a crappy Space Jam reboot off the ground, I have to smile a little.

And when the best I can hope for as a Cavs fan is winning the lottery (again) and getting Zion and hoping Gilbert doesn't eff it up this time, that's why I am salty.

Or, as Field Yates reports:

“LeBron James has dismissed Luke Walton as the head coach of the Lakers.”

Speaking of revenge, here's hoping David Griffin joined the Pelicans in part to trade AD to the Clippers and deny LeBron the chance to play with him.

Here's the thing about LeBron, I'm kind of won over by UpToIsomorphism's last post.

LeBron indeed brought Cleveland a title and multiple trips to the finals. And there's no doubt he's an incredible talent.

There's also no doubt that his way of doing business basically destroys franchise basketball operations. GMs get pushed out, coaches get pushed out. Valuable picks and players get traded or run off. There's more than one person he's worked with who started having panic attacks and seeing a therapist due partly to the pressure he exerts.

I don't think it's overstating it to say that he has a deleterious long term effect on franchises and co-workers even when they're successful.

So in that respect I get the frustration completely.

I like LeBron a lot, but he is a special case. And really, it's why going to LA was always going to be a terrible move for him and the team. There were other places he could have landed that might have still been difficult, but would have at least had the pieces in place to have a winning team.

The Lakers always felt like a team that needed to completely rebuild with a new coach once LeBron came. They didn't have the ability to actually build around LeBron in the first season. It was really always going to work this way.

It does make me wonder what might have happened had the Pelicans not decided to troll the Lakers and just traded AD to LA. Instead, both GMs are gone, LA lost their coach, and New Orleans will probably lose theirs. I get that LeBron was tampering, but Demps' response cost him his job and trashed the team in the process. I mean, he laid waste to the Lakers, too, but I doubt it was worth it.

The NBA tampers. It's so common now that overreacting the way the Pelicans did was pretty much inexcusable. But then, that is the LeBron effect.