Sponsored By: Nicholas Reznikov (review key from the developer)

Half Past Eleven Review

Don’t judge a book by it’s cover, and don’t judge a game by the fact that it says “powered by GameMaker Studio” on the splash screen.

Half Past One review

Steam gets a bad rep these days. Or is it a bad rap? I’ve never been sure. I’m inclined to think it’s “bad rep” because “rep” could be short for reputation. “Bad Rap,” on the other hand, sounds like a tautology to a person who dislikes rhythmic spoken word.

Hang on, I think I’ve lost my train of thought at the platform again.

Steam! Right. A lot of people spend a lot of time complaining because a lot of presumably undeserving games make it to release. They’re not entirely wrong. Lots of what pops up on Steam these days has no business asking people to exchange money for it. This is, however, the price for living in a world in which anybody can make anything they want with as much freedom as they can muster. If that means I have to scroll through a dozen Flappy Bird clones amidst games like The Witcher 3, Farming Simulator and Bendy and the Ink Machine, then it’s a price I gladly pay. 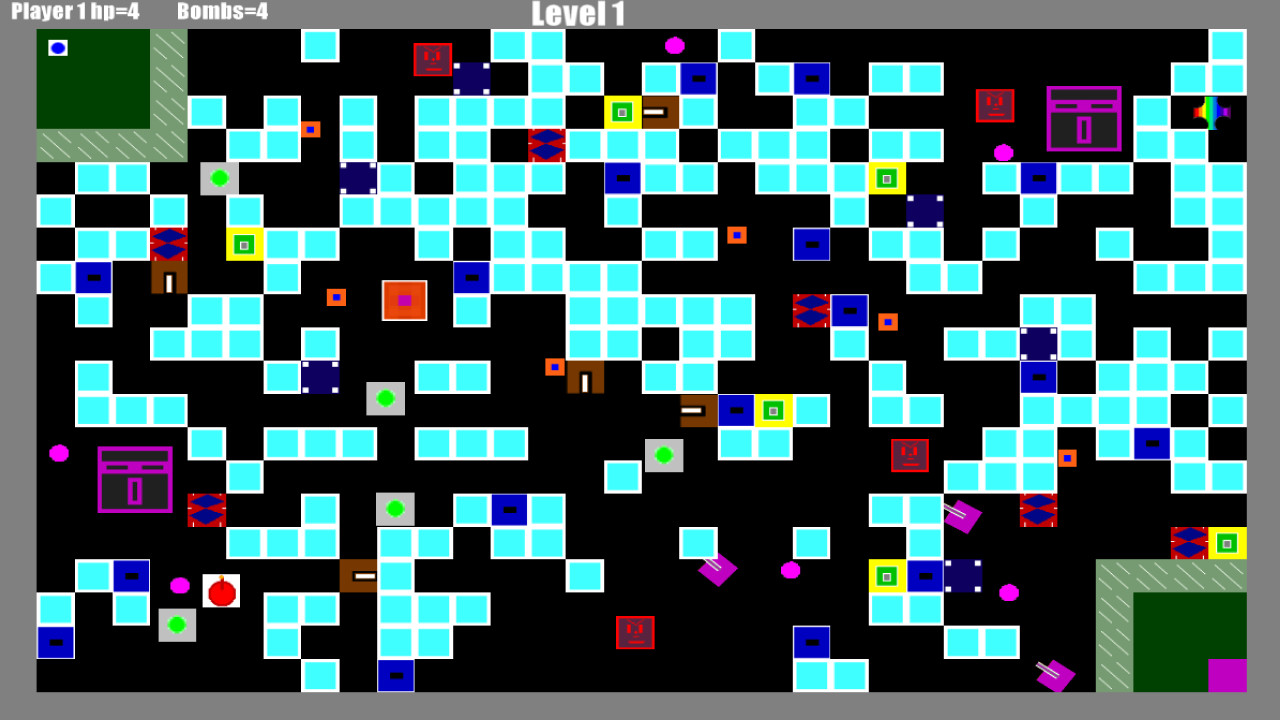 The point is that if anyone can make anything, then a lot of people are going to make garbage. A lot of other people, however, are going to make wondrous things that you’d be lucky to experience. Sometimes it’s easy to tell the difference: You just look for the “powered by GameMaker” stamp, or just blot out all of the titles that think MS Paint is a nifty way to save money on a logo. Doing that, however, would be a mistake. You can’t judge a book by its cover, after all, and you can’t judge a game by the fact that its banner art consists solely of the title in Gothic 3, bold font on a black background.

Which brings us to Noonie.

Noonie is a procedurally generated action puzzle game where you play a small box that must navigate around other boxes of various colors and sizes. Some of the boxes are just walls. Depending upon the color, they may be moved various distances in any clear direction. Cyan blocks, for example, will slide until they hit an obstacle, while red blocks with blue diamonds on them will continue moving all the way to the border of the screen, deleting anything in their path. Other boxes are hostile and will pursue various methods to bring about your demise. Some just chase you and do damage if they touch you, while others will shoot at you if they see you.

Overall there are at least four kinds of wall blocks and at least ten kinds of dangerous blocks, all procedurally placed in such a way to prevent you from moving from the top left corner to the bottom right. And that’s all there is to it. You try to move, push blocks and avoid enemies until you reach the exit, at which point you start over with a freshly generated screen. 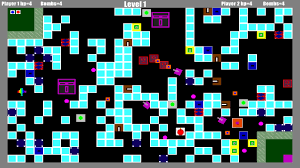 Being procedurally generated, the developer probably figured that there would be some puzzles where you just couldn’t proceed. Maybe there were too many obstacle blocks to move, for example. Knowing that, the player is equipped with a limited number of bombs. Just place one and run away before it blows up, sending out shrapnel that will clear blocks and enemies alike.

It’s a surprisingly robust system and keeps the gameplay fresh in a way that I wouldn’t have expected if I’d only looked at the screen shots. Not that the game looks bad, per se, and I appreciate that the blocks are differentiated by pattern as well as color, which makes it accessible for those of you with color blindness, but let’s not kid ourselves: This isn’t a game that anyone will confuse for a polished, big-studio release.

That lack of polish is, honestly, the only strike I can make against it, though. Sure, it feels archaic to have to quit with the X button on the window instead of having a proper menu option for exiting, but it’s perfectly functional – and if that’s all it takes to put you off of a game, then you clearly don’t play games for the same reasons I do.

If you can tolerate some fugliness, though, Noonie has a lot to offer. I’d recommend it to anyone who likes a challenging puzzle game.

Will I noon on?

This one runs right up my list of games that pull me for one of those “just one more level” loops. Don’t let my scant playtime deceive you: A few weeks ago I reviewed Superflight and sang the praises of the pure game. Noonie is another one of those. You don’t need a whole hour to know it’s good. It’s a game that shows you all its cards early, and plays them extremely well.

I’ll be happy to keep this one installed for a long time to come.

Is it the Dark Souls of infinite block-pushing puzzle games?

So far I have yet to pass level three. That may be a product of incautious play, but it’s certainly indicative of the difficulty at play here. Noonie is a tough game, but the fact that the puzzles generate randomly every playthrough means you don’t have time to get frustrated, because there’s always something new to try.

In other words, yes, Noonie is the Dark Souls of its kind, whatever that kind is. It’s challenging without being insurmountable, has little instruction but is not opaque, and encourages you to just keep trying.

I think I’ll go play it now. Maybe you should too.

This sounds like an interesting concept. I'm trying to wrap my head around the fact that it's procedurally generated... Even with the bombs I would have imagined you could end up in an unwinnable situa...

Oh I get it now... It's the Kobayashi Maru of infinite block-pushing puzzle games... Never mind!

(And yes, I did Google the spelling of Kobayashi Maru. I was pretty close though!)

This sounds like an interesting concept. I'm trying to wrap my head around the fact that it's procedurally generated... Even with the bombs I would have imagined you could end up in an unwinnable situa...

Oh I get it now... It's the Kobayashi Maru of infinite block-pushing puzzle games... Never mind!

(And yes, I did Google the spelling of Kobayashi Maru. I was pretty close though!)

I’m not sure how it works under the hood, but so far I haven’t an impossible puzzle. Mostly the difficulty comes from the enemies.

However it works, it does work and I’ll take this opportunity to plug it again because it’s quite good.