That time, the forward progress whistle was justified.

I hadn’t heard him in a while so I forgot how grating Gruden’s announcing is.

I love how the keep alluding to the coaching job and he's dancing around it.

Jayhawker, do you believe in miracles!?

Mahomes would have made that throw.

Chiefs still with 3 timeouts. Just let Henry stomp them for a first down and eat up the 2 minute warning though.

Uhm, I sure thought I heard a loud whistle. Even before the replay made it obvious that Henry was on his ass before the ball came loose.

Time for the Mahomes era.

If we learned nothing else from this broadcast, we know what Sean McDonough sounded like when he went through puberty.

I gotta feel one road team gets a win this weekend but I’m having a hard time imagining who it could be.

So I’m going to go with the Titans

I love the Andy Reid is still going to break your heart.

It’s cute that you think I haven’t suffered and learned my lesson with Reid for 14 seasons. Trust me I’m not happy since we now have his protege as a HC. Can’t ever escape the curse of Reid.

What in the world happened.

What a choke by Kansas City's defense on 3rd and 10.

KC had another chance coming. They were gonna get the ball back with 1:30 left and only needing to get to field goal range.

Look who pops up!

Way to just bum out everyone in Tenn.

Lol the Rams are corny.

It is Applebee’s so it is more like all you can stand to eat. Their food is pretty bad these days. 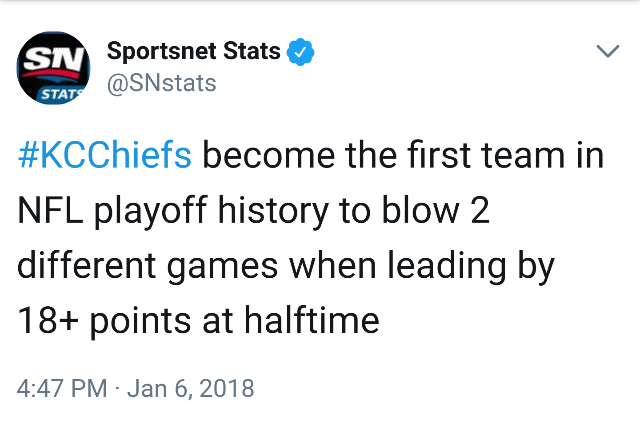 Raiders make official what was made official in the early game.

What signing Revis got KC:

Look at No. 24 Darrelle Revis on Derrick Henry's game-clinching run. Gave up on the Chiefs most important play of the season. What an embarrassment. pic.twitter.com/k9B0oVeCfp

The Browns burn at halftime... owe. That was harsh.

The Browns burn at halftime... owe. That was harsh.

We all want what Mike Florio's got.

The LA-themed musical choices tonight by NBC are just awful.

Pretty awesome throw by Ryan, just laying it out there for Julio. 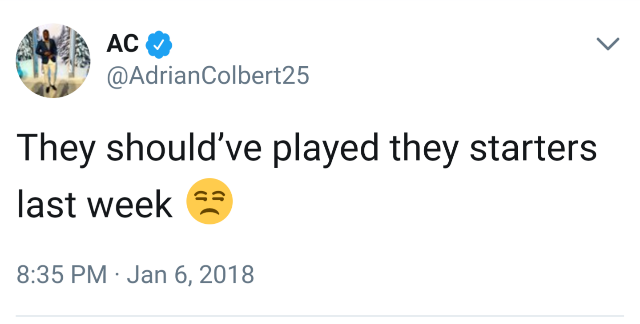 Man has a point.

Soooo two home teams already lost and we shouldn't really be all that surprised.

Not sure what the Jags Bills will bring us. The bills mafia videos via barstool will at least something. I dunno about entertaining but something.

Pulling for the Jags because 1. Bortles mania. 2. Next round games will be better.

Not saying I think Tennessee can beat the Pats but it's plausible in some version of the game where Henry rushes for 200+ and Brady can't stay on the field.

Seemed like the entire second half was either Henry running or Mariota scrambling, with basically no passing threat to speak of. Felt like the Chiefs should have put nine men on the line and just told the other two guys on defense to just go sit down.

Wait, did they do that? It would explain a lot about their second-half performance.

As it should be. I got FF credit for both TDs when Brad Johnson did it back in '97. (Against the Panthers, natch.)