And after the game Gabbert goes over to shake the hand of ...

Good gracious that's quite the collection of QB talent in the same dadgum stadium.

That was incredibly entertaining.

I feel like I had something worthwhile to say about today's Eagles game but at this point I got nothin'. Maybe that I felt bad on the Defensive Line's celebration getting wasted on a reversed call.

That was a great game. Hundley looked really mature. Pittsburgh didn’t look to have prepared for his confidence.

Boooo. Not that I thought they could win that game but made it a game.

Pretty much actually puts a fork in the Packers season. The way the wildcard race is looking they would have to win out which is actually feasible if Rodgers came back with three weeks left but even then they might not make it.

Going to need 10 wins and a tiebreaker or 11 to be a wildcard team this year it seems.

Should Andy Reid bench Smith? It appears he won't be back as their QB next season so I kinda agree why not at this point? Or maybe give Smith 2 more games to see if he can get this team going in the right direction again.

I’m pretty conservative on things like benching players, but I’m pretty much ready to see Mahomes. The offense needs a spark, and that’s pretty much Mahomes’ MO.

There is no way Smith is coming back to KC next year now, so might as well jumpstart the Mahomes era. I wonder how many teams have dropped Smith from their QB search lists. 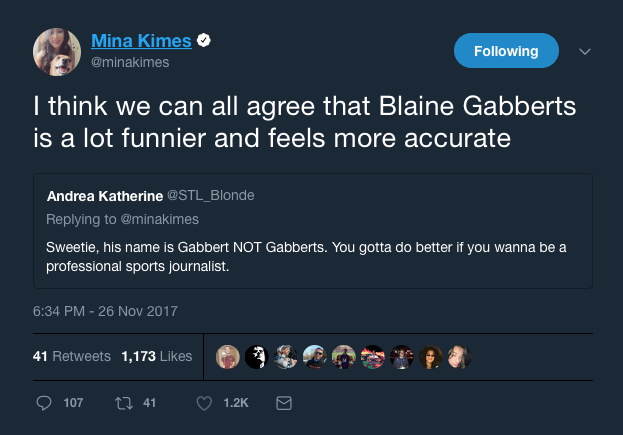 Yeah, I'm watching the game because my mom wanted to watch football tonight, and this is an interesting game to be watching. Two AFC teams that Eagles aren't gonna be going up against. That fake by Koch was incredibly impressive, quite honestly I wondered the same thing.

I'm curious about something regarding Savage. I don't know too much how planning and writing a play works. I don't know if you always have a specific person to pass to or if you just have plans for people to go specific places and determine who is best. Commentators have talked about Wentz's ability to scan the field and determine the situation but that's about as much as I got.

To me, two of Savage's passes looked like the plan was "pass to Player X" regardless of what the situation. For example, the interception that just lead to another Ravens touchdown. The player was clearly where he was expected to be according to the playbook – or so I'm assuming based on what I saw – but there were two guys on him and it looked like Savage just tossed it because that was the play they decided.

Either way, an interesting game to watch. Some impressive throws, too. That one by Koch was worth watching the game for alone.

Most pass plays have receivers running set routes, though sometimes they run option routes and choose which way to go based on the way the defense reacts.

Staring down a receiver is something young and/or sh*tty QBs do. It tips off a defense and helps create turnovers. It's one of the things they generally suck at early in their careers. Tom Brady is still an elite QB because the man has seen everything under the sun and can diagnose most any defense to find the weak underbelly.

The answer to your questions on reads is... it depends.

A progression read is when a play has a sequential read pattern, ie the X receiver is read 1, the Z receiver is read 2, etc., and the QB is expected to progress in sequence looking for the throw to make.

A coverage read is when the throw choice is dictated as a response to the coverage, ie. if the drop into cover 2, look to throw to the X receiver, if it's a cover 3 look, the primary receiver will be the Y in the seam, if they overload blitz from the right side, throw to the back trickling out of the backfield, etc.

Coverage reads are more "scan the field" in nature, as the QB takes in what the defense is doing, and then snaps over to the read that is a response to that coverage and makes the throw. They're also more complicated and easier to get wrong.

As with all things in the modern NFL, these tend not to exist as two discrete, separate things, but rather get mixed and melded together into something more hybrid, eg. progression reads that change post-snap based on specific coverage looks. And it gets complicated by plays where the receiver's routes change based on the coverage look, or change post-snap based on what a defender does.

But in general, a QB does not just drop back, scan the field, and find a receiver to throw to in an ad hoc manner. There is usually some sort of progression or coverage read involved.

By the way, if you want to judge how NFL quarterbacks make reads and throws, you could hardly do worse than a Tom Savage vs. Joe Flacco game. You would be better off with Gabbert vs. Bortles even.

Savage gonna Savage. I loved the comment by Gruden a few minutes before the last interception, that Savage said this was his audition for the other NFL teams since his contract is up this year.

His season average will actually drop to 5.3 YPA once this game's numbers get added in.

For reference, here's the list of post-merger seasons for full-time starting QBs (12+ starts, 100+ attempts), from lowest YPA up.

1. Archie Manning, 1975 (4.98)
Archie's worst season as a pro, in which he was so beaten to hell that he had to sit out the entire 1976 season, when he was unable to regain sufficient shoulder strength following surgeries to correct the damage he sustained.

6. Kordell Stewart, 1999 (5.32)
Just awful. He averaged 91.5 passing yards per game, before getting benched for Mike Tomczak. In the top 100 worst YPA seasons, only three others even failed to reach 100 yards per game, and all three of those were in the dead ball 1970s.

8. Blaine Gabbert, 2011 (5.36)
Finally. You knew this was on the list. Unlike Harrington, Gabbert was never this bad again... welll... only because this was literally the only season in which he qualified for the list. He started only 10 games in year 2, and then never more than 8 in a season for the rest of his career to this point. Still, he threw for 6.0 in that second year, and 7.2 in his magical 2015 8-start season.

9. Vince Evans, 1981 (5.40)
Known best as a long-tenured career backup, Evans had a couple of starting seasons at the start of the '80s. The team responded to these performances by selecting Jim McMahon in the 1982 draft.

So you're saying Joe Flacco is Elite. Or at least More Elite than six other guys.

And that's just the six guys who've played QB for the Browns over the last 2 years.