The NFL's version of parity pretty much comes down to "do you have a good QB or not."

This is why I won't be too broken up when the Niners draft in the top 5 in a draft class seemingly flush with QB prospects.

This is the real reason Kaepernick is unemployed: Tanking.

I wouldn't let good-ol'-boy racism off the hook that easily. But no doubt the upcoming draft class has not escaped the attention of about a dozen NFL teams.

I wasn't entirely serious, but here's a new angle I just thought of:

The Ravens didn't sign him because they didn't want a QB better than Flacco on the roster.

Hence why they let Tyrod Taylor go a few years back.

There are rumblings Bradford's knee injury could be serious. If there's one spot where I think Kaepernick might be accepted pretty willingly, it's Minnesota. It's a generally liberal state, occasionally clinically insane elected public officials notwithstanding.

Kaepernick in the hands of Pat Shurmur would be interesting.

I'm a Browns fan, so I understand why I have to think about that awful Colts game, but why on earth are you making everyone else think long enough about it to have to decide which team will win this 3-2 game?

I'm a Browns fan, so I understand why I have to think about that awful Colts game, but why on earth are you making everyone else think long enough about it to have to decide which team will win this 3-2 game?

Are you kidding? That game is going to end with a final score of 53-52 or something. And every single point will have been scored by the defenses.

Black, white, brown or yellow, Albert Haynesworth will f*ck you, as long as you're a "REAL WOMAN"

That throw Goff had to Sammy Watkins along the sidelines right after halftime? Man oh man that was a pretty throw. Dropped that rock right in the bucket.

There are rumblings Bradford's knee injury could be serious. If there's one spot where I think Kaepernick might be accepted pretty willingly, it's Minnesota. It's a generally liberal state, occasionally clinically insane elected public officials notwithstanding. 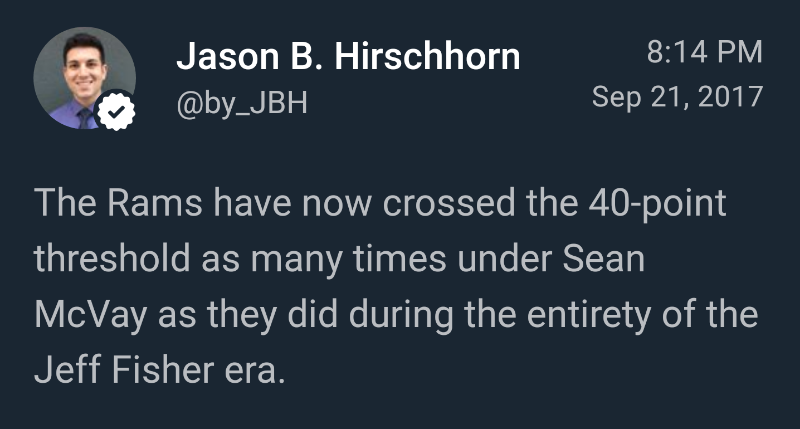 So who's getting up like me early tomorrow and watching the pre-game ceremonies?

I'm worried it's not going to be nearly the level of demonstration it should be.

i was flipping through channels and whichever pre game show that has Kurt , Irving and Steve M. on there was blasting 45.

Jags beating the crap out of the Ravens. Maybe I should go back to bed to not jinx them.

From the stats it sure looks like Joe Flacco being the king of check down isn't working out so well.

Is Joe Flacco an elite quarterback?

Is Joe Flacco an elite quarterback?

Looks elite to me.

I wouldn't even call him a QB anymore. He sucked last year and he's even worse now. Can't wait for them to drop Captain Ineffective Checkdown. Dude needs a perfect OL to be effective anymore. 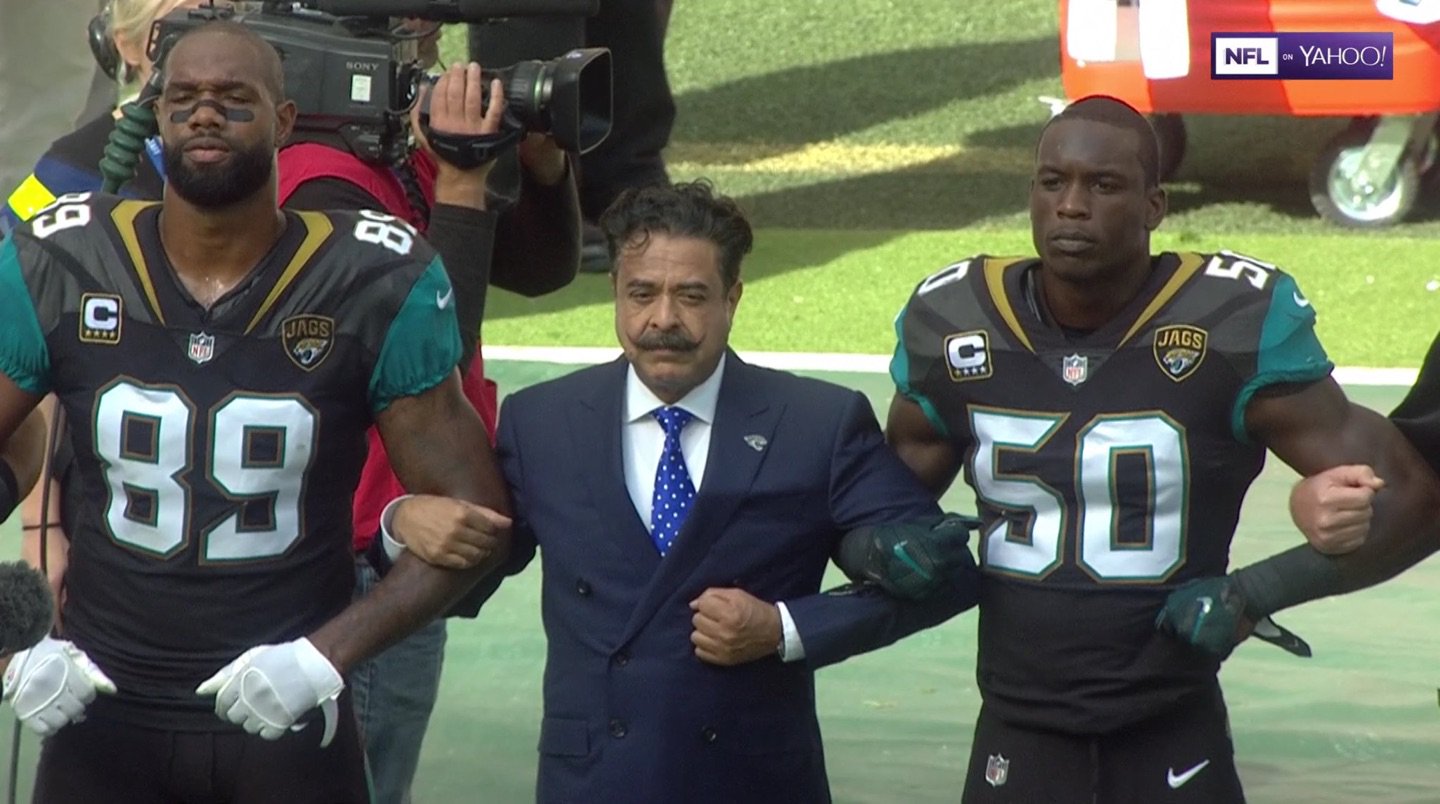 Too bad he enabled all this by donating to Trump's campaign.

A racist defends racism, news at 11! What did people think they would get when they donated or voted for Trump... I'm glad to see more players, execs, and owners calling attention to it this weekend. The attendees booing them should be ashamed of themselves.

Too bad he enabled all this by donating to Trump's campaign.

To be clear, Khan donated $1 million to the inauguration committee, weeks after the election. Not the campaign.

Khan's campaign donations in 2016 were to the Gridiron PAC and the Senate Majority PAC, the latter being a PAC "solely dedicated to building a Democratic majority in the U.S. Senate."

Keenum is beating up the Bucs again

I'm glad you asked, because there was a lot going on in that sequence.

Steelers attempt a FG on the final play of the half. Bears block the kick. Bear defender Marcus Cooper scoops up the block, runs for a would-be TD, but pulls the Leon Lett short of the goal line, and gets run down by former 49er TE Vance McDonald, who strips the ball.

Ball is loose in the endzone. Steelers punter bats the ball out the back of the endzone. That's an illegal bat. Penalty.

Here's where some confusion happens. The referees originally rule the play from the perspective of the Steelers being the offensive team - in which case, the penalty ends the half. They rule that the half is over. Steelers players leave the field.

Bears coach John Fox wants the play ruled a safety. It's not a safety, though, because the loss of possession happened outside the endzone, not inside it.

Referees finally figure out that the Steelers are the defensive team after the first change of possession (the kick block), which means that the half should not end. As such, the result of the illegal bat is that the ball is to be spotted at the point where the fumble occurred, which was the Steelers one-half yard line.

That means it's Bears ball for one untimed down, on the Steelers one-half yard line.

Steelers have to get called back onto the field. They show up, everyone lines up for a play. Bears are going to go for it instead of kick the field goal, because they're so close to the endzone.

Then the left tackle false starts, moving the Bears back 5 yards. They opt to cut their losses and kick the field goal.

Back in Florida, on vacation, and like old times I get TB and MIA on TV. Both getting beat down.

Think I'll head out to the beach