Hey, kids! I just found this profile sitting on my desk. Turns out this guy's been on payroll for years, though I can't find him in the org. chart anywhere. Anyone know who he reports to?

Maybe I'll bring this up with HR. This could be one of those "Milton" issues.

Basically it boils down to competitiveness in most things I do, be that TF2, sports or fantasy sports, while enjoying the company of friends.

Who the devil are you?

Professional football player from UVA. (You believe that, right? I have a football in my hand and the T-shirt on to prove it.) Actually, I was a pitcher in baseball growing up, but my hands were never large enough to throw a football consistently well.

What are you supposed to be doing when you're reading GWJ?

I think the question should read "What are you supposed to be doing when you’re reading GWJ and filling out this questionnaire?" The answer to both would be "job." Mostly do IT work (like 90% of people on this site, right?) in Washington, DC, where I’ve been with the same company for about 6 years now after graduating from college. I also do some event/conference related things, so I get to travel a few times a year around the country to fancy resorts with that part of the job.

When you're not working or gaming, what do you do with your time?

I enjoy anything to do with the outdoors/sports. I am good at sports (to the extent that a 5’8” average-build dude can be) that require hand/eye coordination, but horrible at ones that require good balance. Hence, I play a decent amount of things like basketball, baseball, tennis, table tennis and especially golf; but am terrible at hockey, soccer, and skiing.

I don’t really watch any TV shows outside of Discovery Channel (Moonshiners and Mythbusters!) so if I’m looking at a screen that isn’t work- or game-related, it likely has anime or manga on it.

A goofy cat that thinks he’s a dog.

When and/or how did you get into gaming?

I’ve always been a Nintendo guy since I had saved up my “life savings” when I was 6 years old to buy a used NES from a friend of my aunt. Since then I’ve owned every Nintendo system, console and handheld, though that might end with the WiiU, since I just use my friend’s system when I get the itch to play Mario Kart 8.

What is your fondest gaming memory?

This is tough as there have been so many. I’ll cheat and name a few.

· Beating Bubble Bobble on the NES when I was 6 or 7, only to realize that there was an alternate ending, and then another alternate ending. It was a glorious day beating the final boss in “super mode” to get the “true” ending.

· Going to my best friend’s house after school days in elementary school and playing Sonic the Hedgehog on Sega Genesis, since I only had Nintendo systems.

· Going to PAX East in 2011 and playing in a TF2 tournament there with fellow GWJers. We made it to the semis before getting rocked by some pro team. Renji was also supposed to play but had to be pulled away as he was too busy beating people in Omegathon. The picture is after our victory in round 2. Note also the team name.

What is your favorite game over the last year or so? Why?

I’ll take this question to mean “came out over the last year or so,” otherwise I would just be saying TF2 for everything. In that case, I’ll go with Mario Kart 8. While it’s not my favorite Mario Kart game in the franchise (that honor goes to DoubleDash; oh Barrel Train with Diddy Kong, how I love thee), it is a very good iteration in the series that finds a decent medium on the skill-vs.-fun curve. Also, DLC tracks? Yes, please.

What first brought you to GWJ? What keeps you coming back?

GWJ’er Mr. Plow first introduced me to the GWJ TF2 server back in 2007. I was a “pubby” for a few months on the server before finally joining the forum early in 2008. I still remember MyBrainHz (aka Brian) adding me to his Steam friends list since I was on the server so often he thought I must be on the forum. When he found out that I wasn’t, he promptly removed me from his list.

The great community keeps me coming back. It’s always more fun to play with people you “know” and have some history with rather than randoms online. There’s no question: I wouldn’t be playing TF2 anymore if it wasn’t for this forum.

Is there a particular forum on GWJ that you frequent/favor? Why?

Aside from the TF2 thread where I’d guess at least 50% of my posts reside, I’d say the Sports / Fantasy Football corner of the forum. I’ve been in at least one GWJ league for the past 4 or 5 years, including the Keeper League since its inception. It was especially good to me this year as my atrocious team in the Pro ($$$) league won while taking down Gumbie and Legion in the playoffs. (Voodoo dolls may or may not have been used.)

What is the story behind your handle?

I’ve been using this handle for most of my online gaming life (around 15 years) starting with the game I like to call “TF2 before TF2”, aka Day of Defeat. That was the first online multiplayer game I really played a lot and discovered my love of melee weapons.

The handle is derived from a prank call I found pretty hilarious that made the rounds in the late '90s, called “You Kicked My Dog”.

What is the story behind your tag?

As you probably could have guessed by now, it has to do with TF2. In general I enjoy playing the fast classes in games and using melee weapons. That class in TF2 is the Scout, and the sound of him hitting people with his bat / frying pan is “bonk.” For reference, according to our hlstats page, I have 447 fryingpan kills over the past year, with second place being 140 and third being 37. I may have a problem.

Do you have any notable rivalries and/or friendships with someone on GWJ?

Shout out to all my buds from TF2 for 7 great years. I particularly want to thank Mex for allowing me to stab him so many times and Psych for being a big “jerk.”

What is your favorite videogame music?

Theme song from Bubble Bobble on NES. I still have that thing stuck in my head to this day after 20+ years.

What Goodjers do you know / have met IRL? (one slap and tickle doesn’t count)

Thanks for taking the time to answer our hard-hitting questions! Any last words? 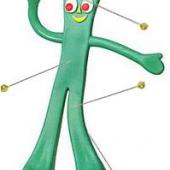 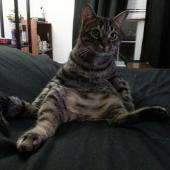 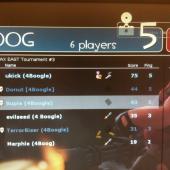 ukick is cool, and also a jerk, but mostly cool (when he's not being a jerk on the other team)

I particularly want to thank Mex for allowing me to stab him so many times and Psych for being a big “jerk.”

At least you know every backstab is because I allow it, I know it brightens your day u_u

With the last words Bonk, I can't help but be reminded of Pinky (of Pinky & The Brain) saying "Narf!" all the time.

I'm confused now... are we kicking his dog or his cat that thinks it's a dog? Or are we punching and just thinking we're kicking?

Great read! Now I hate your scout even more!

Probably working on a FEM

Nice, I had never heard that prank call before. Oh, and ukick is also Jerk with a pan and pretty much any other weapon in TF2. Thanks for the good times.

Man PAX East 2011 was a ton of fun. Somewhat of a blur though

I did learn some valuable lessons there:
-Hanging out with goodjers at cons is awesome
-Playing Operation after five hours of sleep, while highly caffeinated, in front of an audience, and having walked briskly across half of downtown Boston, will not end well.

Hey Mr Fancy Frontpage. I haven't played TF2 in a while, but when I did you were always the dog-kicking-est one there.

I hope you get a big head from this, so it's easier to snipe at.

My name was mentioned! Tear to my eye...

Hi5 on making the front page. Semester's almost over, so I'll try to log on to Stan's soon so you can kill the crap out of me repeatedly, as usual

Uh oh... I got called out as IRL friend

It's weird to think that it was 2007. So many people have left TF2 for other games. Thanks for sticking around, ukick. It wouldn't be as much fun without you. So brainz is a duplicitous bastard both in and outside of the game, huh.

Don't worry, we all know you aren't real.

ukick is credit to team!

ukick is one of the nicest people and I am very glad to have met him a couple of times in real life. I frequently hate him in TF2 but only when he is on the other team.

ukick is credit to team!

Seriously though - congrats on the profile.

Oh my GOD!! Why would you do this? First he gets the Australium wrench and now this.

Or just, you know, pop your full load of Vaccinator charges on him disguised as he runs towards his teammates saying, "Kill him! Kill him!" on alltalk.

I wouldn't know anything about that. Nosirree.

I hate contributing to that pan kill stat